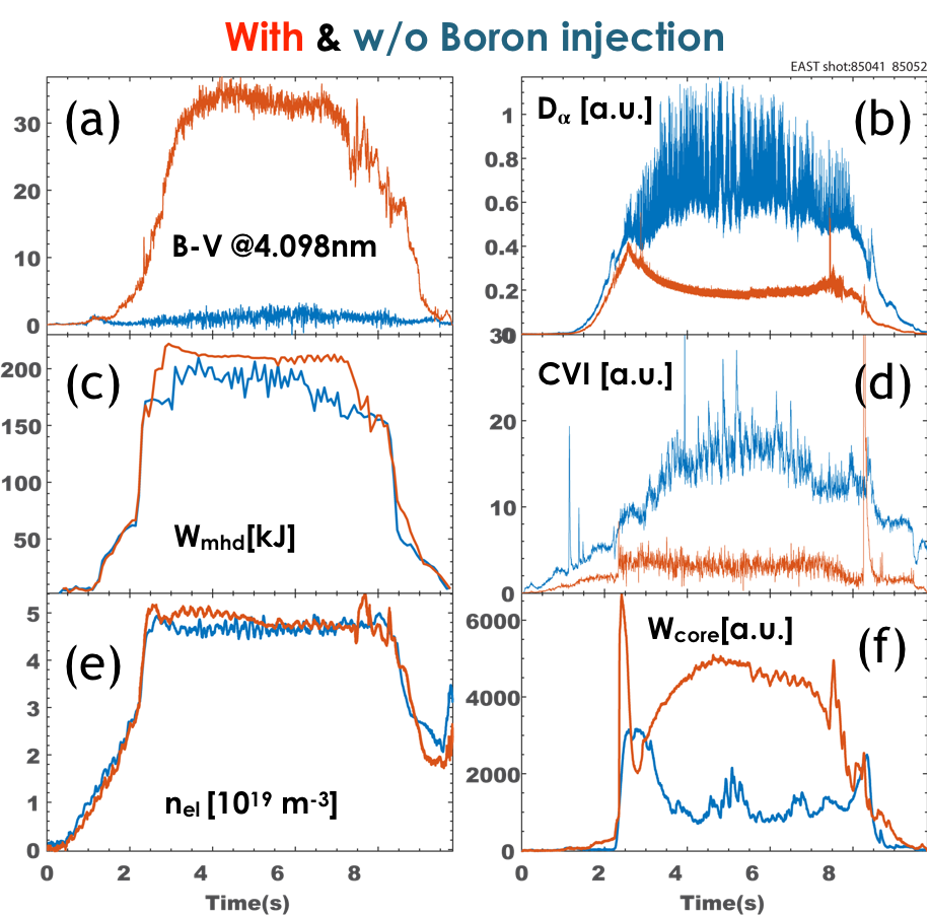 Experimental results - ELM suppression was demonstrated on the EAST tokamak by injecting boron impurity in the upper X-point to investigate the effects of boron powder on tungsten core accumulation. Figure 1 displays the time history of relevant discharge parameters without and with boron injection (20 mg/s - a fraction of which produces localized density perturbation). Here, a proxy of boron injection is shown using the B-V emission (Fig. 1a). The presence of ELMs is indicated using the D$_{\alpha}$ signal (Fig.1b). It is clear from this figure that ELM suppression is associated with a slight increase in the stored energy (Fig. 1c) due to an overall increase of electron temperature for the same input power, as well as a reduction of carbon impurity (Fig. 1d). While in this discharge the core tungsten (W) is maintained albeit at a higher level than without B injection (Fig. 1f), other discharges have shown a reduction of core W accumulation. 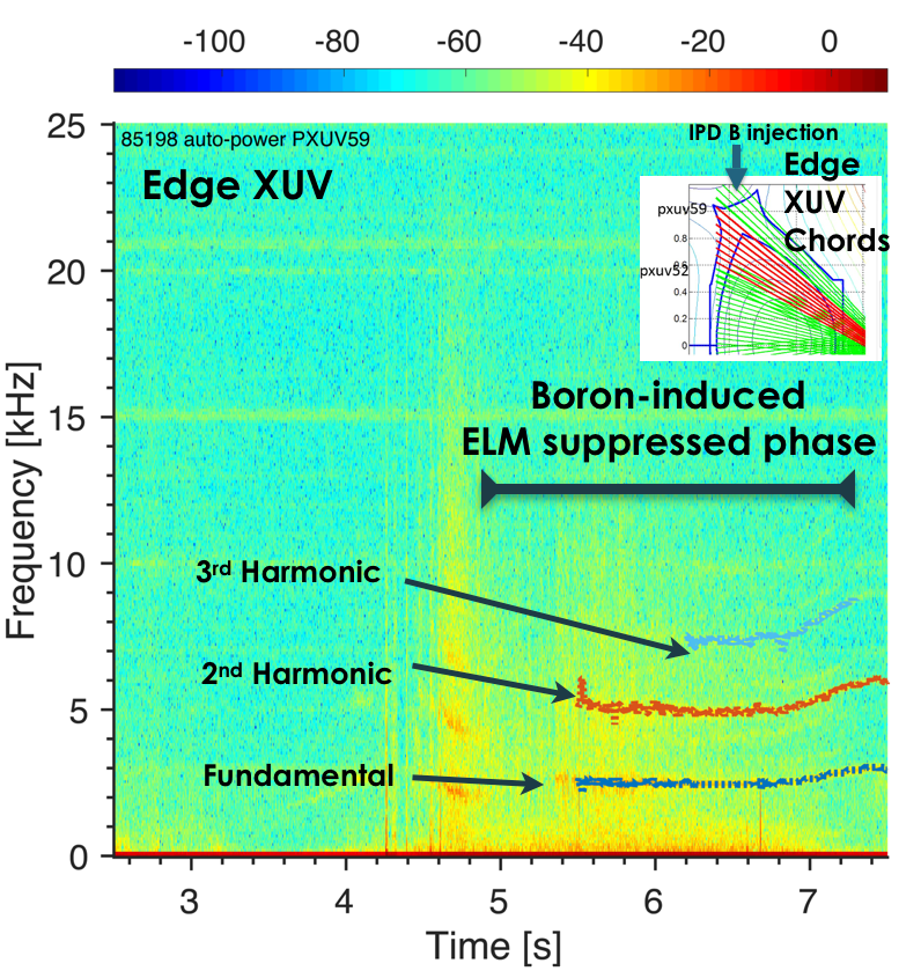 ELM suppression is not caused by a cumulative/compound effect of boron on the divertor but induced by the interaction of boron powder with the background plasma. To rule out the cumulative effects of boron, a causality test was performed. Specifically, the injection timing was varied for repeated discharges to show that ELM suppression occurs after the boron emission reaches a threshold on the B-V monitor. In addition, we also showed that when boron injection is halted, ELMs return promptly. The direct effect of boron on ELM suppression provides a clear contrast from lithium induced ELM suppression, which is characterized by cumulative conditioning effects and a small reduction in stored energy [R. Maingi et al. 2018 Nucl. Fusion 58 024003].
We then turn to the interaction between the ablated boron powder and the background plasma by examining the fluctuations. ELM suppression is correlated with the onset of modes with multiple harmonics (see Fig 2). These n=1, 2,3 modes are detected in upper X-point (localization of the boron-induced density perturbation) using XUV (proxy for impurity and electron density fluctuations) detectors as well as on magnetic probes. Using multiple complementary diagnostics (BES, interferometers), we showed that these modes are radially localized in the edge near the separatrix.
A clear onset of the mode is observed when the boron emission reaches a certain threshold. Subsequently, the mode’s amplitude increases until saturation is reached. We observe that the mode onset is associated with a reduction of the core W signal, suggesting that the mode drives particles out. Evidence of the fluctuation at this mode’s frequency has been observed on Langmuir probes and divertor D$_{\alpha}$ signals corroborating the fact that particles are kicked out (though orbit loss) from the confined region to the SOL. In addition, the reduction of W is associated with the increase of mode amplitude, which is reminiscent of the edge-harmonic modes in Q-H mode being responsible for particle transport. A question remains: What is the nature of the mode? 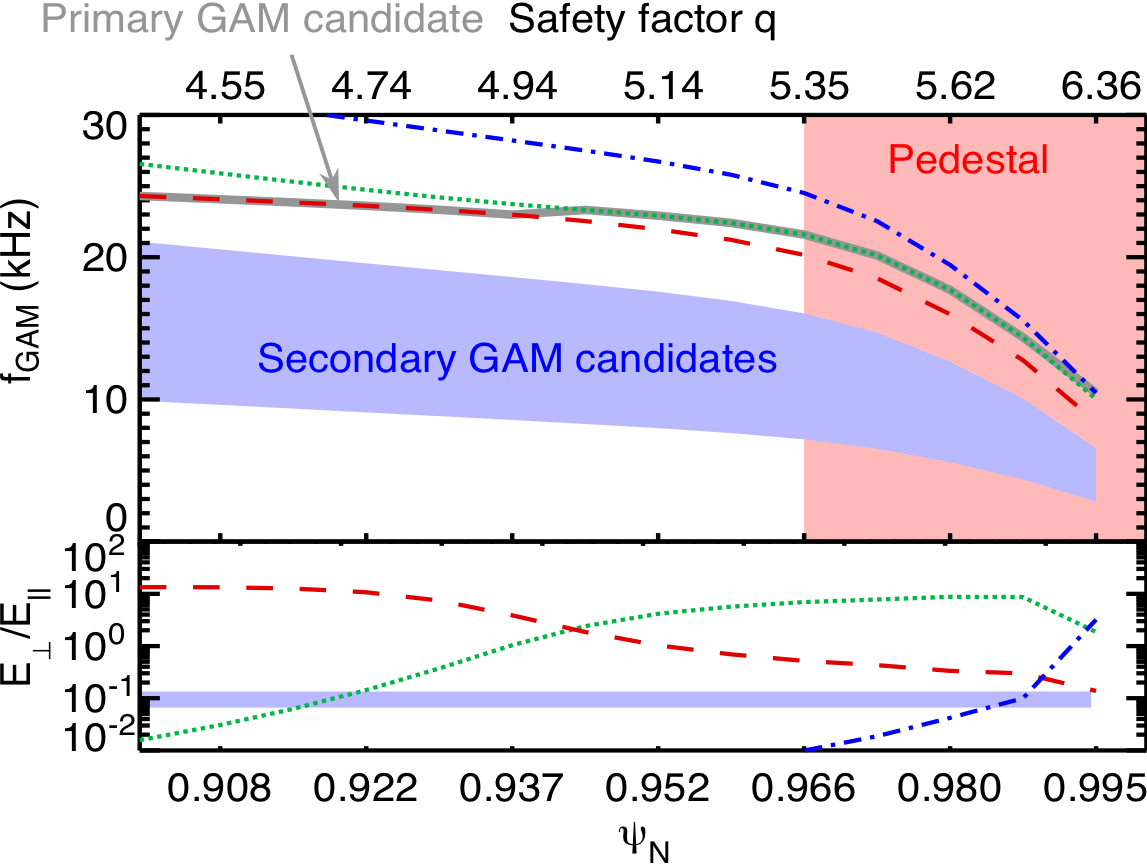 Theory - The injection of boron occurs at the upper X-point and the ablated boron creates a local density perturbation. The driving mechanism of the GAM-like observations is described below.The local perturbation induced by the ablated boron leads to a poloidal asymmetry of charges. Such asymmetry will generate an oscillation akin to a Geodesic Acoustic Mode (GAM). While GAMs do not usually cause a net particle flux on their own, it is conceivable that this might change due to orbit loss for oscillations near the separatrix. Simulations are being performed to assess the existence of GAMs and kinetic calculations are in progress to investigate the GAM effectiveness of driving particles out if localized near the separatrix. The GAM frequency for radial wavenumber k$_r$=0 is calculated by solving a two-fluid eigenmode problem [K. Hallatschek, PPCF 49, B137 (2007), R. Hager et al., PPCF 55, 035009 (2013)] in realistic geometry. Because of the complex coupling between the GAM and the sound wave spectrum close to the separatrix, several GAM candidates exist that are classified according to their ratio of perpendicular to parallel kinetic energy E$_\perp$/E$_{\parallel}$ (Fig. 3). The mode with the largest fraction of perpendicular energy is the GAM with fGAM≈10 kHz at normalized poloidal flux $\psi_n$=0.995. But other (more soundwave-like) modes with non-negligible coupling to the radial electric field (E$_\perp$/E$_{\parallel}$∼10%) exist at lower frequencies between 2.8 and 6.6 kHz at $\psi_n$=0.995. The initial two-fluid calculations are consistent with the modes observed in the experiment. However, calculations of the accurate kinetic GAM frequency with nonlocal effects, in the absence of turbulence, are being performed using XGC to compare with the two-fluid calculations. Results presented could open new research opportunities in controlling ELMs by making the pedestal marginally “leaky” via edge-localized GAM-induced particle transport. Work by US DoE Work DE-AC02-09CH11466.