Outline A novel scheme to predict the plasma turbulent transport is developed by combining the machine learning technique and the first-principle gyrokinetic simulations. The machine learning technique is applied to find the relevant input parameters of the nonlinear gyrokinetic simulations which should be performed and to optimize the reduced transport model. The developed scheme can drastically reduce the computational costs to perform the quantitative predictions of the plasma profiles and the turbulent transport levels. Utilizing the scheme, the quantitative predictions for the turbulent transport can be realized by only one-time first-principle simulation for each radial position.

Conventional transport prediction schemes The first-principle simulation based on the gyrokinetics is powerful and reliable way to predict the turbulent transport or the plasma profiles. Indeed, it has been possible to validate the gyrokinetic simulations against the experimental observations within the experimental errors [1]. For the predictions, there are two main schemes. One is performing many first-principle simulations, which is called flux-matching technique [2]. The other is employing the reduced transport model, which is constructed by results of many gyrokinetic simulations. In the former scheme, by performing gyrokinetic simulations with changing the input parameters for the plasma profiles, we can find the transport fluxes that agree with the observations quantitatively. However, to obtain the matched transport fluxes, numerous gyrokinetic runs should be demanded. For example, even in the case of the single-species plasma, the conventional flux-matching demands 5 times or more runs for each radial position. Therefore, in particular, for the case of multi-species plasmas, we must perform a huge number of the simulations in the multi-dimensional parameter space which is exponentially expanding with increasing the number of the species. In the latter scheme, on the other hand, the reduced model enables us to obtain the turbulent transport fluxes without additional nonlinear gyrokinetic runs. However, since such reduced models are constructed by the limited parameters of the plasma profiles and include certain prediction errors, it is hard to reproduce the nonlinear simulation results precisely. In this work, by combining the first-principle simulations and the machine learning techniques via the reduced model, we reduce the number of the gyrokinetic runs and realize more reliable and efficient predictions.

A new transport prediction scheme We develop a new transport prediction scheme, which consists of three parts as shown in Fig.1. Here, we consider the ion heat transport as an example. To reduce the number of the first-principle simulations, we have to find the relevant input parameters of the simulations to realize the resultant transport fluxes which is close to the experimental results. First, in the developed scheme, for finding the input parameters of the simulation, we employ the reduced model for the ion heat diffusivity [3], which is constructed under the adiabatic electron assumption. The model includes the turbulent contribution $\cal L$ and the zonal-flow contribution $\tau_{\rm ZF}$ as $\chi_{\rm i}^{\rm model}/\chi_{\rm i}^{\rm GB} = A_1 {\cal L}^{\alpha_0} / (A_2 + \tau_{\rm ZF}/{\cal L}^{1/2})$. Here, ${\cal L} \equiv a(\rho) [R/L_{T{\rm i}} - \beta_0 R/L_{T{\rm i}}^{\rm cr}]$ with the critical temperature gradient $R/L_{T{\rm i}}^{\rm cr}(\rho)$, $\tau_{\rm ZF}$ is the zonal-flow decay time, and $A_1, A_2$, $\alpha_0$, and $\beta_0$ are constant numbers determined in the model. Using the machine learning numerical library [4] for the initial model, we find the initial guess of the temperature gradient which realizes the transport flux $Q_{\rm i} = -n_{\rm i} \chi_{\rm i} \nabla T_{\rm i}$ that agrees with the observations in the target plasma. Second, using the guessed parameter, one trial run of the first-principle simulation is performed for each radial position. Third, using the results of the trial run for each radial position, the machine learning is performed again to optimize the reduced model by tuning the parameters with $\alpha_0 \to \alpha$ and $\beta_0 \to \beta$ in the initial model. Then we can obtain the optimized transport model $\chi_{\rm i}^{\rm opt}$ suitable for the target plasma by only one gyrokinetic simulation at each radial position. 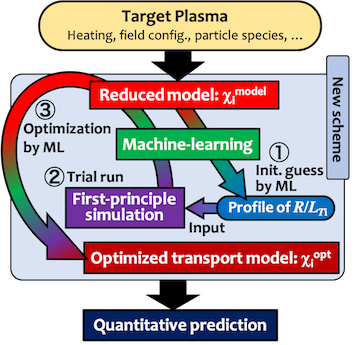 Figure 2(a) shows the comparison of the temperature gradient dependences of the ion heat diffusivities obtained by the initial reduced model and the optimized model for the ITG turbulent transport in the high-$T_{\rm i}$ plasma in the LHD [5]. Compared with the initial model, the optimized model with $\alpha/\alpha_0=0.89$ and $\beta/\beta_0=0.92$ quite agree with the nonlinear runs which are never used for the construction of the optimized model. In addition, it is confirmed that the optimized model can reproduce the weakening of the profile stiffness due to the nonlinear effects. Furthermore, as shown in Fig.2(b) for the convergence checks of the developed scheme, one trial run is enough to construct the optimized model for each radial position because the machine learning via the initial model can guess the relevant temperature gradient which is close to the guess from the nonlinear runs, independently. Therefore, the scheme can reduce the number of the first-principle simulation runs to only once for each radial position. The reduction of the computation time will be more remarkable in the multi-species case. 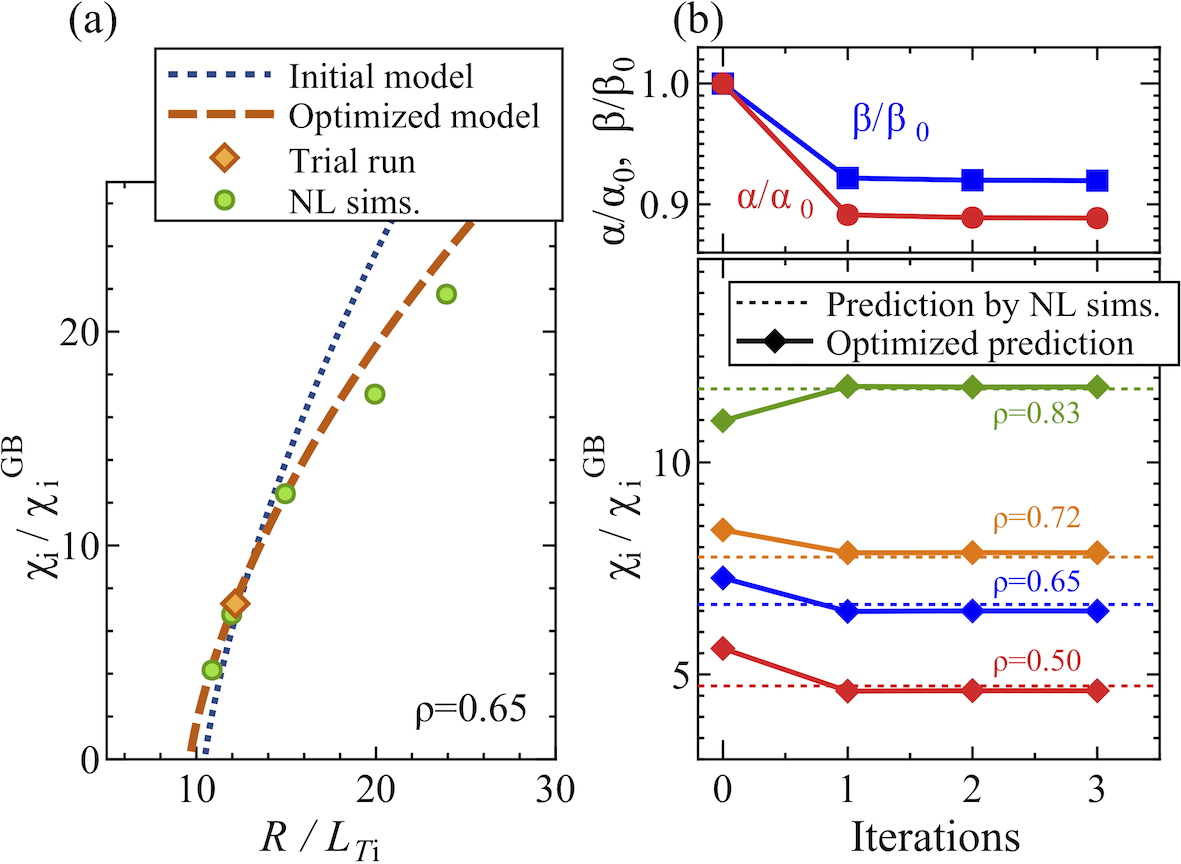 Using the optimized model, we can obtain the guesses for $R/L_{T {\rm i}}$ and predictions for $\chi_{\rm i}$ as shown in Fig.3. Although the temperature gradients guessed by the initial and the optimized models are not so different from each other, the optimized model can reproduce the turbulent diffusivities by the nonlinear simulations better than the initial model. At least in this application, we can obtain the transport levels which quantitatively agree with the nonlinear runs by using the developed scheme with performing just one-time first-principle simulation for each radial position. Since the developed scheme enables us to thoroughly reduce the number of the first-principle simulations, the scheme can be applied to the integrated transport code for quick and precise predictions of the plasma profiles under the operation scenarios with drastically saved computational resources. 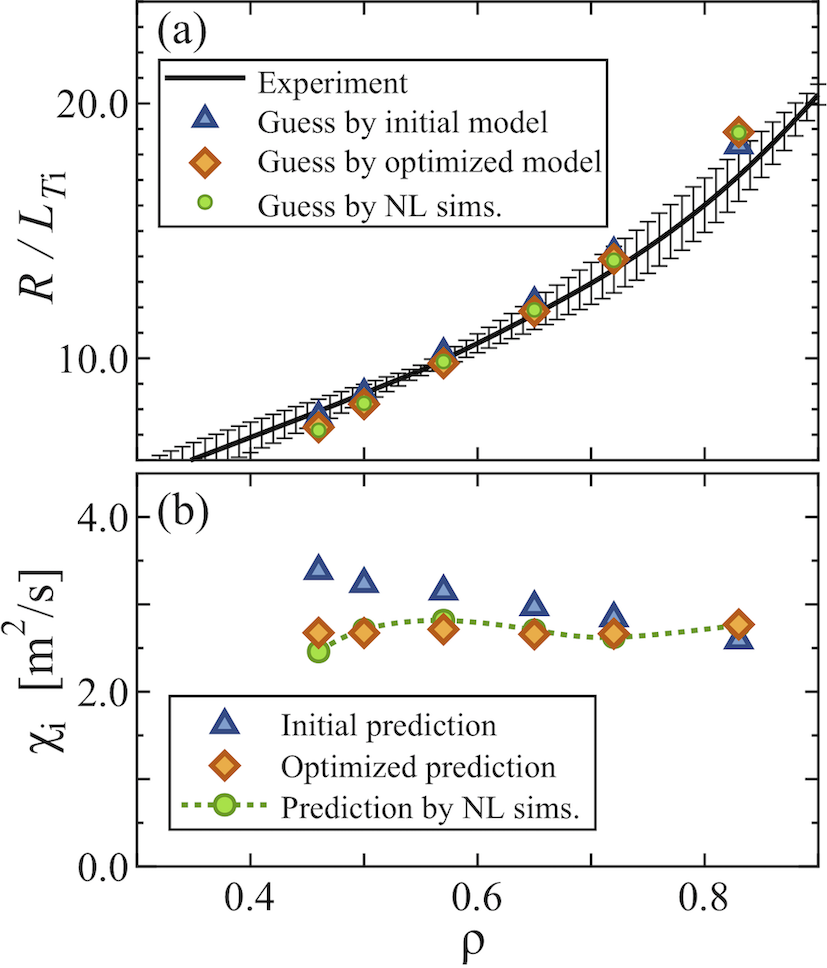