A promising repeatable laser system producing multi-kilojoule of pulse energy has been basically designed for realization of the fast-ignition-based inertial fusion energy (IFE) reactor. Two cultivated core key technologies ensure high reliability of the proposed design. First, using our novel bonding technology, a cryogenic active-mirror amplifier has been developed to enable 100 Hz repeatable operation at 100 J of pulse energy. Kilojoule energy can be easily obtained for the fuel compression by combining a number of the amplifiers into a single beam. The other is the high-contrast, petawatt laser technology for heating laser: LFEX-laser demonstrated 2 PW, 2 kJ, 1 ps with a high intensity contrast more than 1 x 10^10.

Understanding of the central ignition scheme of IFE reveals significant difficulties of the ignition achievement through many experiments and theoretical calculations by using a number of kilo-joule class beam lines at the huge facilities in National Ignition Facility (LLNL) and OMEGA facility (LLE, Univ. Rochester) and so on. Recently, at Osaka university, the highly efficient production of an ultra-high-energy-density plasma of 2.2 Peta-Pascal has been successfully demonstrated with the fast ignition scheme by using the 2 PW LFEX-laser.[A] This remarkable progress of the fast ignition research accelerates realization of a practical IFE reactor based on fast ignition scheme. However, a repeatable high power laser system, which is an absolutely essential technology of the IFE reactor, is still missing. In a latest fusion reactor design, as multiple moderate-in-size reactors operate together, the required repetition rate for the laser system comes up to 100 Hz. So far, all high-energy laser systems used for the IFE studies, including the above lasers, are a single shot laser, and there is no repeatable laser system in kilo-joule class over the world. Serious bottlenecks for repeatable laser operation are thermal effects caused by large heat loaded in the laser material of the energy amplifier, wave front distortion, induced birefringence, and material fracture. The first application of ceramic active-mirror to high energy fusion laser as a laser amplifier reduces these effects dramatically to enable repeatable operation.

The active-mirror laser amplifier shows, in principal, two excellent capabilities of a high heat removal due to conductive cooling with a metal heat sink and a low wave front distortion due to the heat flow direction parallel to the laser propagation, shown in Fig. 1. In addition, a ytterbium-doped YAG (Yb:YAG) ceramic is used as a laser material instead of the conventional neodymium-doped laser glass (Nd:glass). The high thermal conductivity of the YAG ceramic is about one-order of magnitude higher than that of Nd:glass, this high thermal conductivity reduces the material temperature rise. Moreover, the Yb:YAG ceramic is cryogenically cooled to increase the thermal conductivity further. A cryogenic active-mirror has been already demonstrated at high repetition rate of a few hundred hertz, the aperture size was, however, as small as 1 cm class and the pulse energy was around 1 J.[B,C] A thermally strong bonding of the ceramic to the metal heat sink is considerably difficult. And to make matters worse, as the cryogenic operation temperature is quite different from the bonding temperature, an intense internal stress of the ceramic is not avoidable in several-centimeter aperture size for more than 10 J due to a different thermal expansion between the ceramic and the metal. By developing a novel bonding technology, which is under patent pending, to relax the stress, 7 cm x 7 cm active-mirror has been successfully bonded and 10 J high pulse energy has been obtained at 10 Hz with the four diode-pumped cryogenic active-mirrors, for the first time, in Fig. 2. A higher repetition rate of 100 Hz will be demonstrated and a higher pulse energy of 100 J will be upgraded by enlarging the beam aperture size in the near future. 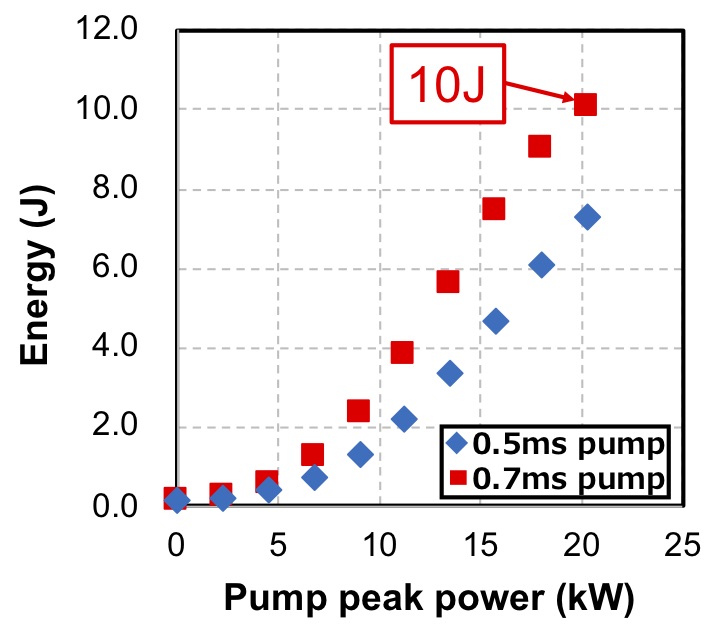 Another core key technology is the petawatt laser technology. The kilojoules chirped-pulse amplification (CPA) has been already developed in our LFEX-laser at 2 PW, 2 kJ, 1 ps to supply pulses for the plasma experiments. An excellent intensity contrast of more than 1 x 10^10 is obtained with the original pulse cleaner in Fig. 3. The large aperture essential optics used in CPA such as a dielectric grating (92 cm x 42 cm, 1740 grooves/mm) has been already developed, see Fig. 4. 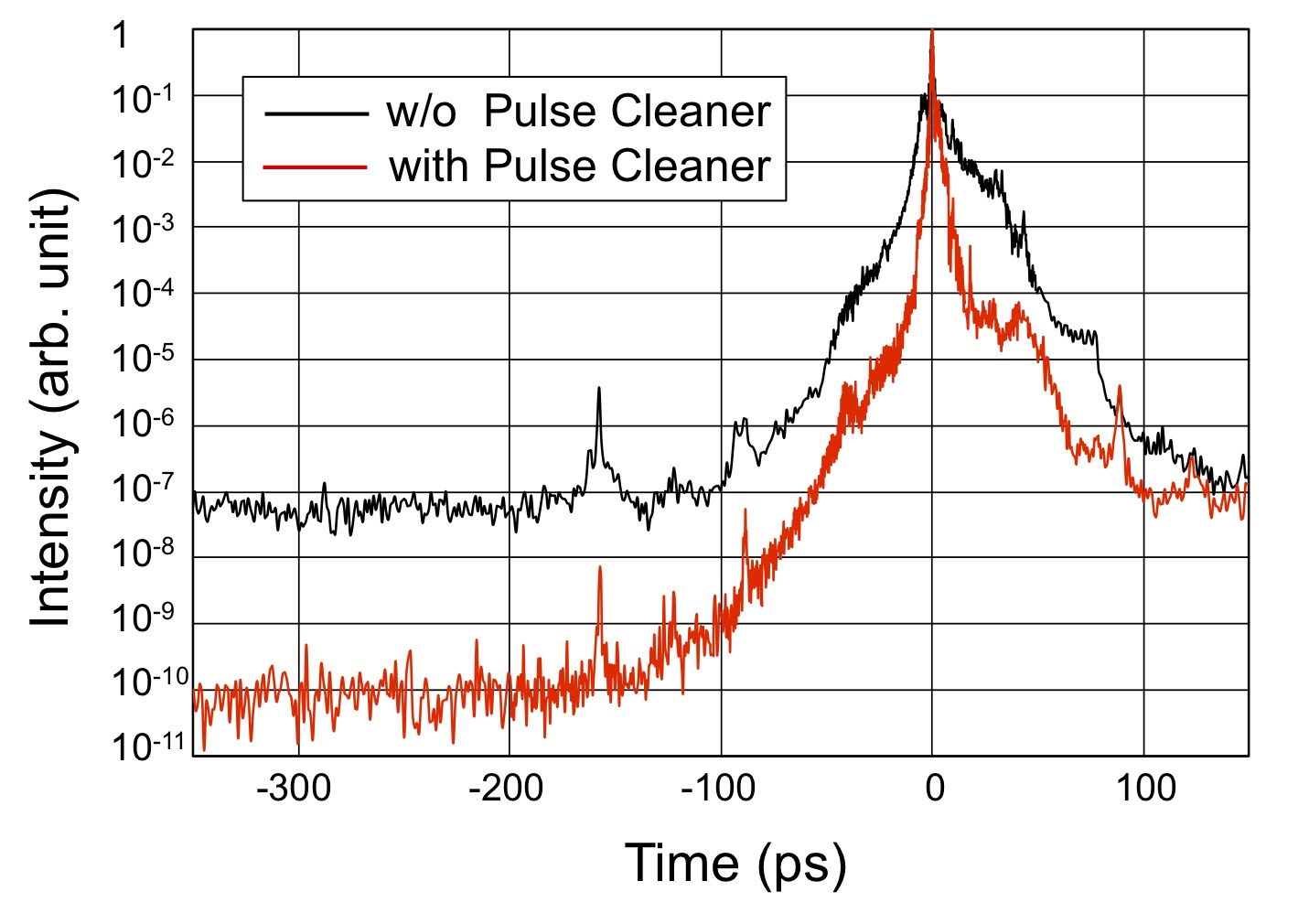 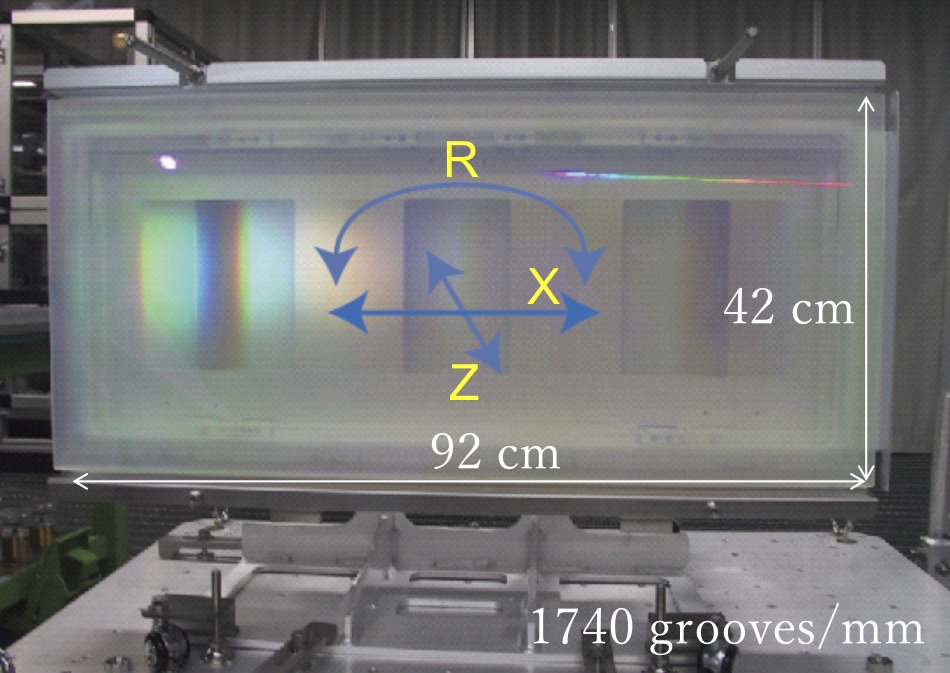 A promising repeatable laser system at multi-kilojoule, named “J-EPoCH”,[D] has been basically designed for various high-energy-density plasma applications, and roughly consists of two laser systems of a nano-seconds power laser and a petawatt laser. The power laser is a 16 kJ diode-pumped solid-state laser system with 160 beam lines, each of which has a 100 J, 100 Hz active-mirror laser module. The petawatt laser is a Titan-doped sapphire (Ti:sapphire) laser system. Using about half beamlines of the power laser system as a pump source after second harmonic generation, kilo-joule energy is obtained in the femtosecond to picosecond time domain. Extremely higher thermal conductivity of cryogenic Ti:sapphire, compared with cryogenic Yb:YAG, is plenty of thermal strength for 100 Hz operation. The appropriate combination of beam lines from the both systems will help the first power generation demonstration in the fast-ignition-based IFE reactor.[E]