Successful operation of ITER depends critically on disruption management for the Pre-Fusion Power Operation (PFPO) phase up through Fusion Power Operations (DT). The power-handling capabilities of the beryllium (Be) first-wall panels (FWP) and other plasma-facing components (PFC) must be preserved in the face of disruptions and vertical displacement events (VDE). This need should account for intentional, low-power events required for electromagnetic load validation in the early operation phases, along with unintentional events that will usually be mitigated by the ITER Disruption Mitigation System (DMS). Multiple factors of the disruptions and VDEs influence the time-dependent heat flux and energy deposition onto the PFCs, which then determine the increase in surface temperature, melt formation, and material loss from melt motion and vaporization. Even for relatively low plasma current scenarios during the early operational phases $(I_P = 5 MA)$, initial studies predicted Be melt damage from upward VDE current quenches (CQ) up to ~0.5 mm deep and lateral melt displacements up to ~10 cm for single events$^1$. The implication is significant given the 10mm Be armor thickness and castellated geometry of the ITER FWPs. Extensive damage to Be surfaces due to such events has already been clearly documented on JET$^2$.

This paper will detail the extensive studies being performed at ITER to estimate material damage to the Be FWPs during disruptions and VDEs, ensuring that the first-wall power-handling capabilities are maintained up through Fusion Power Operations. The simulation efforts described in (1) are significantly expanded to cover a range of VDE and disruption scenarios for PFPO phases and FPO. This scenario dataset allows for a broad series of parametric studies to be performed using a novel simulation workflow developed at ITER. The methodology is as follows: 2D magnetic flux profiles from the DINA code$^3$ provide input to the SMITER 3D field-line tracing software$^4$, producing 3D maps of perpendicular surface heat flux $q_\perp$ and magnetic field $\overrightarrow{B}$ on the FWPs. These maps are then used to compute the time-dependent melt formation and dynamics with the MEMOS-U code$^5$, accounting for heat flux reduction by plasma vapor shielding. The final step is to regenerate the FWP models in SMITER using the melt deformation data from MEMOS-U. This capability allows for an assessment of heat loads on the damaged panel from either steady-state scenarios or a subsequent VDE/disruption. 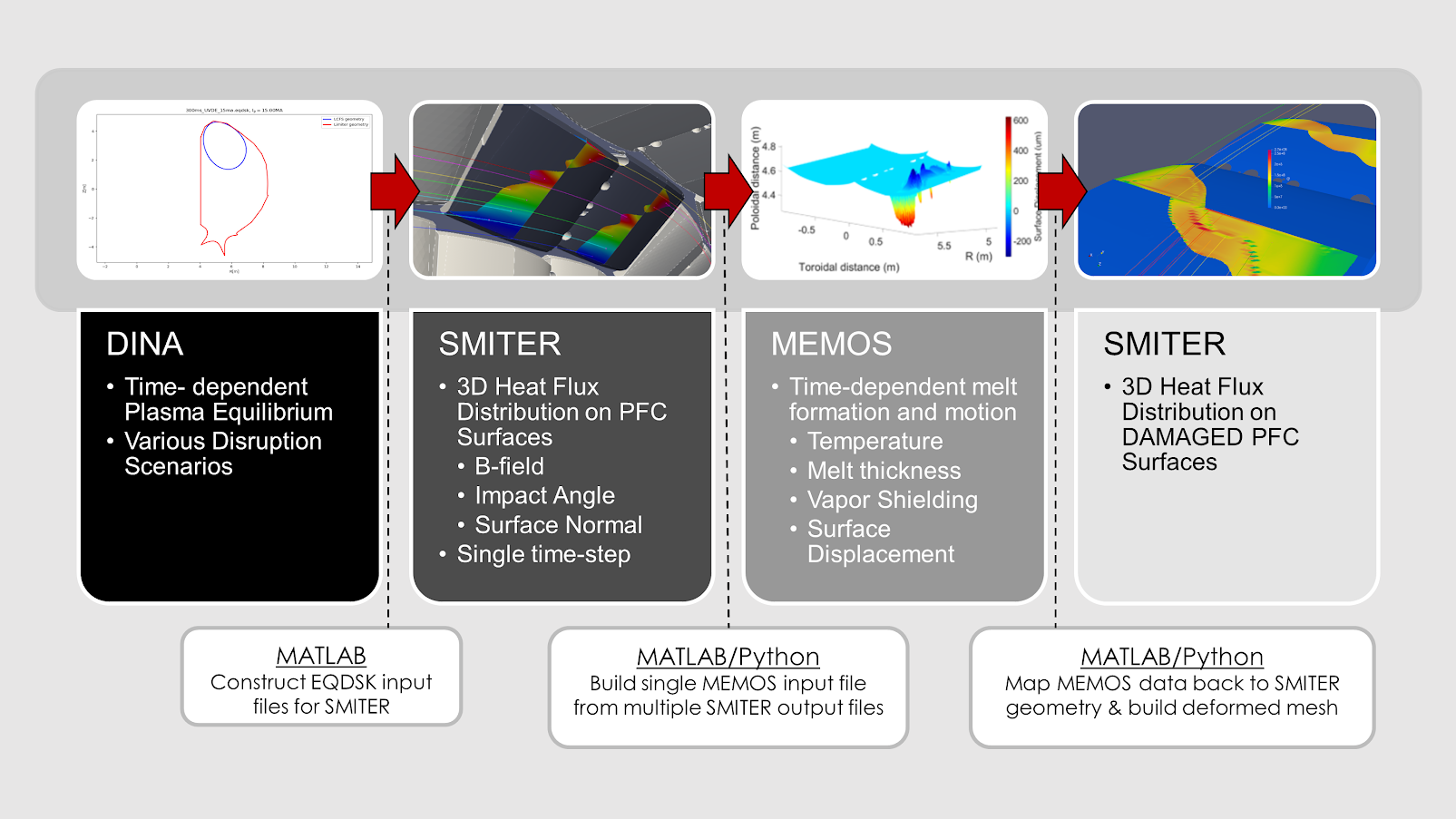 The DINA simulations provide parallel heat fluxes $q_\parallel$ and current densities in the halo region from a full power balance, including radial transport, ohmic heating, radiation and losses along field lines. Variations in the DINA scenarios include: $I_p$ (5 – 15 MA), disruption direction (up or down), Be impurity density (~0 – $3x10^{19} atoms/m^3$), and disruption type (VDE vs. major disruption). SMITER simulations use CAD-accurate, high-resolution FWP meshes to generate surface heat loads and wetted area patterns at different time intervals of the plasma scenario. Uncertainties in parameters calculated in DINA are studied in SMITER: power traversing the last closed flux surface, $P_{sol}$ (+/- 20%); scrape-off layer heat flux widths $\lambda_q$ (+/- 25%); and the limiting location of the disrupting plasma (+/- 10mm radial displacement). MEMOS-U simulations utilize the thermomechanical material properties of solid and molten Be, compiled from literature and the ITER Material Properties Handbook. A new library of vapor shielding efficiencies has been incorporated into the MEMOS-U simulations such that the importance of shielding can be studied by switching shielding effects on/off. The shielding is characterized using the 1-D PIXY code$^6$ taking into account plasma parameters from DINA, allowing for a time-dependent heat flux modified by the shielding effect as a function of $q_\perp$ and Be vaporization rate. 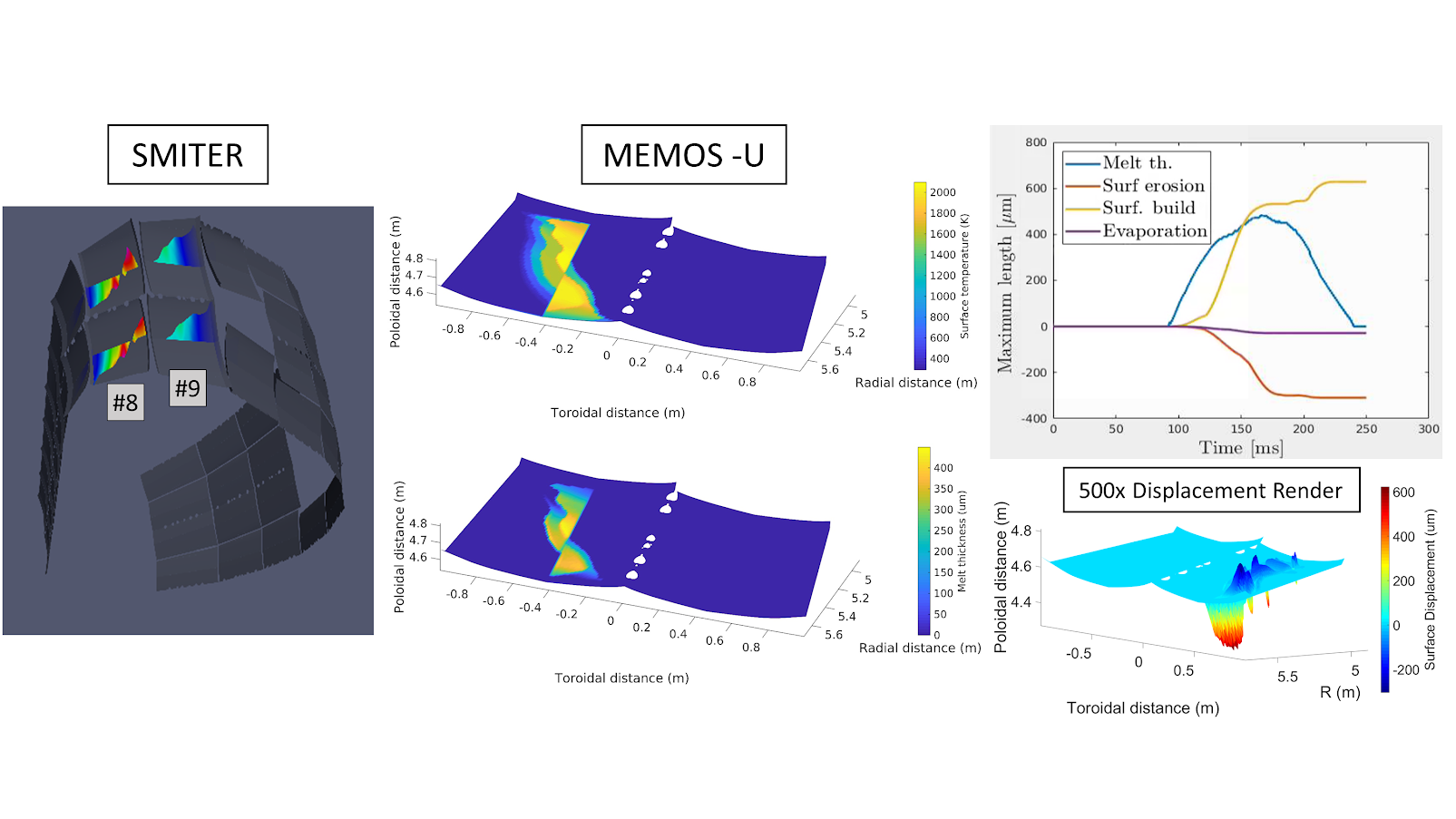 Preliminary results emphasize the importance of a multi-physics workflow in estimating a realistic lifetime for the ITER first wall. The introduction of Be vapor shielding, for example, significantly reduces the incoming $q_\perp$ impacting the FWPs, even for the less-severe, relatively long 5 MA VDE cases. The shield is shown to equilibrate rapidly, in ~1-2 ms, relative to the typical ~200 ms duration for VDE energy deposition. At peak surface temperatures of 1800 – 1900 K, and at VDE-relevant heat fluxes of 100’s of $MW/m^2$, the vapor shielding efficiency can approach 70 – 80 %. Such strong shielding substantially slows the surface temperature rise, leading to less-severe melt thickness, melt motion, and surface deformation. For the 5 MA upward VDE, the maximum Be thickness loss for upper FWP #9 is reduced by about 50%, from ~0.3 mm to ~0.14 mm. As the molten Be is displaced and re-solidifies, the height of melt ridges is reduced by about 60%, from ~0.9 mm to ~0.34 mm.

The geometries of these deformed zones, with excavated pits and melt ridges, influence the local power loading of the damaged panels when subjected to further heat loads, as will be the case for actual operation. Since the damage does not overlap with the peak energy deposition pattern at the secondary X-point, damage profiles from the majority of upward VDEs have negligible consequences for steady-state operations. However, as depicted in the heat flux maps of Figure 3, a successive 5 MA upward VDE onto damaged FWP surfaces is a concern. Local heat fluxes are modified due to the melt pits and ridges, leading to increases of $q_\perp$ by 15 - 35%. 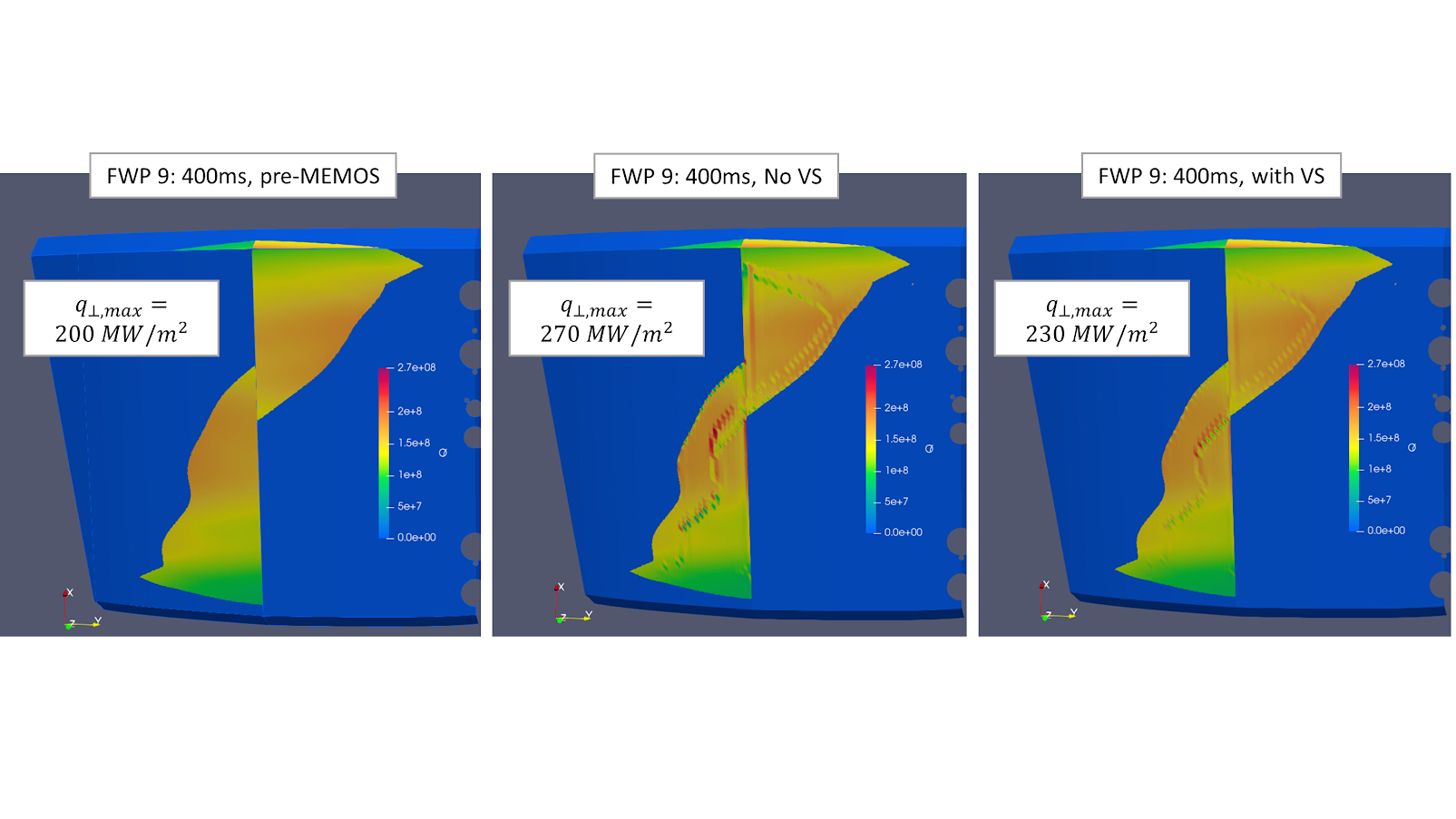 Some sources of variation are less of a concern. A +/-10mm radial variation in VDE location, for instance, leads to a negligible difference (~10 um) in peak $q_\perp$ and melt excavation magnitudes. A comprehensive disruption budget must ultimately take into account the type of disruption, location of impact, and the order and combination in which such events occur. Some combinations may lead to ‘smoothing out’ of prior damage, while other combinations may enhance the damage profile. It is the evolution of these successive, 3D damage profiles that will degrade the FWP power handling capabilities and set a limit on lifetime. Work is ongoing to complete the parametric studies listed above, analyzing heat loads and melt damage for the worst-case grouping of disruption uncertainties. Those panel damage profiles will then be combined with sequential steady-state and disruption loads, as in Figure 3. In this way, the most limiting combination of events will be thoroughly explored and presented.