For the first time, the progress in RF full wave modeling allows for simulating the wave field in arbitrary 3D antenna/first wall geometry together with the scrape-of-layer (SOL) and the entire tokamak/stellarator core plasmas in an integrated manner. Universal observation among many RF heating and current drive (H/CD) experiments in the ion cyclotron (IC), high-harmonic fast waves (HHFW), lower hybrid (LH), and electron cyclotron (EC) frequency ranges is that the wave interaction in SOL plasmas has a significant impact on the RF actuator performance. The simulation of the wave propagation in SOL, however, is challenging due to the fact that it is intrinsically a 3D problem. The computation domain is surrounded by geometrically complicated antenna structure and the background plasma lacks a symmetry due to the private flux regions and fluctuations. Indeed, state-of-art RF SOL/antenna simulation is yet limited to a relatively small volume in front of the antenna, involving significant simplification in the geometrical representation of antenna and/or wave physics. Lifting this limitation is critical to evaluate the RF waves field accurately, especially as the focus of RF experiments orient towards the performance optimization with many RF actuator components being operated simultaneously. Such a device includes, but not limited to, WEST, NSTX-U, SPARC, and ITER. Moreover, the wave propagation in SOL regions and the hot core region, where the wave is spatially dispersive, are not isolated each other. It is important to solve the Maxwell problem in two regions self-consistently. This self-consistency is crucial both for improving the predictable capability of H/CD performance and for better understanding the RF induced plasma-material interaction (PMI).

Our approach to above issues are in twofold: first, we overcome the limitation of present-day antenna/SOL RF simulation tools with a newly developed 3D RF fullwave simulation, Petra-M $[1]$, based on the scalable MFEM library developed by LLNL (http://mfem.org), and second, we combine the Petra-M simulation with our start-of-art core RF solvers in order to incorporate the finite temperature effects of RF waves. On the Petra-M platform (Figure 1), a user can perform the FEM analysis seamlessly from parametrized geometry generation to FEM linear solve on a computing cluster. This paper reports the analysis of RF wave including the 3D SOL plasmas and antenna structure in IC, HHFW, and LH frequency ranges.

Our advanced RF wave solver allows for solving the HHFW propagation including the entire NSTX-U plasma together with 3D RF antenna $[2]$. In Figure 2 and 3, we analyzed the RF electric field induced on the NSTX-U vacuum vessel and its dependence on the antenna phasing. The computation domain is generated directly from the CAD model of the 12 strap antenna structure and the NSTX-U EFIT equilibrium. Note that the simulation in Figure 2 automatically takes into account various effects including the curved antenna/wall structure, and the actual antenna spectrum with the plasma loads, which were either not considered or supplied via a separate calculation in the past. A key parameter for RF induced PMI is the wave electric field on the wall. In figure 3,the normal component ($E_{\perp}$) on vessel wall with the different antenna phasing are compared, showing that a stronger $E_{\perp}$ is induced in the low antenna phasing case. This result is consistent with the experiments in NSTX, where a lower phasing showed poorer core heating performance $[3]$. Further analysis of HHFW using Petra-M including the investigation of interaction between HHFWs and NBI beam fast ions is presented in $[4]$.

The core-edge coupling approach $[5]$ allows for including the spatially dispersive nature of hot core plasma to an FEM based wave simulation for SOL using the complicated geometry (figure 4 (a)). Importantly, it allows for separating the RF power absorbed in core and parasitically in edge. The comparison of D-(He3) and D-(H) heating simulation indicates that a significantly higher (by ~60%) fraction of injected power is absorbed in the core, when the single pass power absorption is strong $[6]$. We extended this approach to use the 3D geometry for the SOL region. The first ever simulation of 3D ICRF wave field combining the hot core, the cold SOL plasma, and 3D antenna structure is shown in figure 4. We used Petra-M for the SOL and antenna regions and the TORIC spectral solver $[7]$ for the core region. Here, the D-(H) heating scenario with the rotated ICRF antenna on Alcator C-Mod is modeled. The result shows that the wave field in the core is smoothly connected with the edge RF wave field, indicating that there is no significant wave reflection at the LCFS. Also, the excited RF wave field does not spread to the high field side of the tokamak, consistent with the high strong pass in this scenario.

The LH wave has a short wave length comparable to the scale length of density fluctuation typically found in the plasma edge. The wave scattering due to such fluctuations has been an issue when modeling the LH current drive. However, since the fluctuation stretches along the magnetic field line, this process cannot be captured well in 2D fullwave simulations. We investigated this issue with Petra-M by adding density profile perturbation which is imposed to follow the magnetic field line. In figure 5, (a) and (b) shows that such a density fluctuation can destroy the resonant cone wave field propagation pattern. The change in the wave field pattern results in a broadening of perpendicular wave number spectrum. In figure 5 (c), the impact of the spectral modification was studied using GENRAY/CQL3D raytracing Fokker-Planck package (http://www.compxco.com), showing that the LH current drive profile is altered dramatically.

In summary, we demonstrated that the fullwave RF simulation for fusion plasmas can scale to a large problem size needed to compute the wave field in the whole fusion device. Our approach allows for including the complicated SOL plasma and antenna structure, while using the hot plasma conductivity for the core. The international validation effort on the WEST tokamak is in progress. This work opens up the possibility to investigate physics issues such as slow wave generation and RF rectified potential $[8]$ in a realistic configuration. 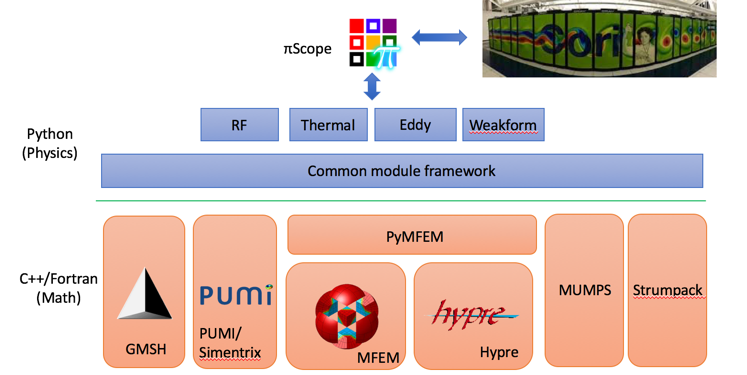 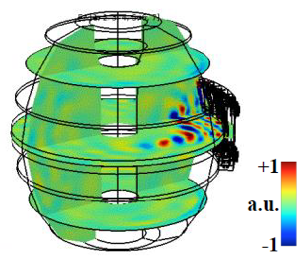