The mission of the spherical tokamak NSTX-U is to advance the physics basis and technical solutions required for optimizing the configuration of next-step tokamak fusion devices, and to advance the development of the ST concept towards a compact, low-cost Pilot Plant 1. NSTX-U will operate at up to 2 MA and 1 T with up to 10 MW of Neutral Beam Injection (NBI) power for 5 seconds and 4 MW of High Harmonic Fast Wave (HHFW) power. NSTX-U has three main objectives: to explore confinement and stability at low aspect ratio and high beta at low collisionality, to develop the physics understanding and control tools to ramp-up and sustain high performance plasmas in a fully-non-inductive regime, and to develop and evaluate conventional and innovative power and particle handling techniques to optimize plasma exhaust in high performance scenarios. Following the initial 2016 NSTX-U run campaign, analysis has continued during NSTX-U Recovery to address physics issues to develop understanding and capabilities that, once operation commences, will aid in achieving these three objectives.

Stability and 3D physics: The resistive DCON model for calculating tearing mode stability ($\Delta'$) has been developed, benchmarked against extended-MHD (M3D-C1) simulations, and used to identify regions in $q_{95}-\beta_N$ that are simultaneously stable to both 2/1 tearing modes (Fig.1) and n=1 ideal kink. 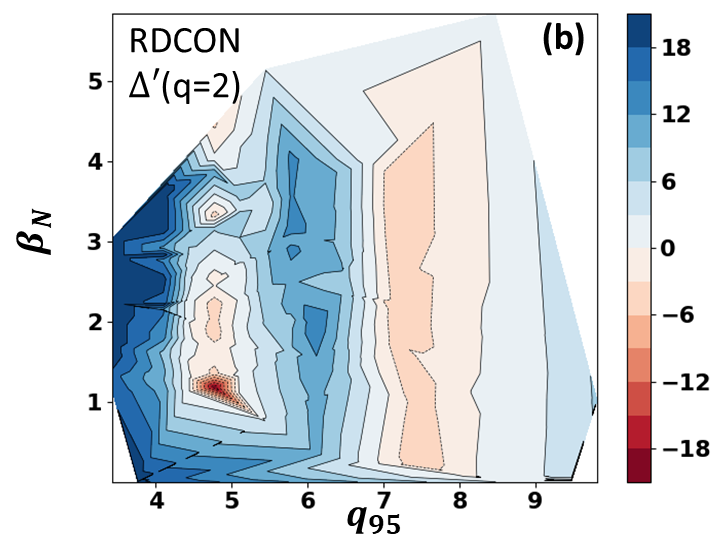 M3D-C1 has been extended to predict Te and Ti independently in the presence of impurities during a thermal quench 2. The simulations show a contraction of the current channel that is sensitive to temperature, and a fast stochastization of the B-field, highlighting the difficulty in cooling the plasma while avoiding a thermal quench using impurity injection. Continued analysis on 3D error fields have shown that misalignment of the toroidal field (TF) was the largest source of the error field on NSTX-U during initial operation in 2016, and these calculations, guided by constraints on the field line pitch at the divertor plates in order to mitigate potentially high heat fluxes, were used to drive the engineering tolerances for TF shift and tilt for NSTX-U Recovery [3]. Additional calculations show that misalignments in other PF coils lead to extended divertor footprints but which are contained within the divertor region designed to handle high heat fluxes [4].

Energetic particle (EP) physics: The phase-space-resolved reduced EP transport kick model has been extended to include non-Alfvénic low-frequency perturbations, reproducing observations of (i) large fast ion losses due to synergistic effects when TAE and fishbones/kink instabilities occur simultaneously, and (ii) enhanced fast ion loss due to NTMs when the island width exceeds a threshold [5]. The stability and scaling of global Alfven eigenmodes (GAEs), previously correlated with central Te flattening in NSTX, has been predicted using hybrid MHD/kinetic-fast-ion simulations [6] and also newly derived analytic instability conditions [7], revealing a previously unidentified instability regime necessary to explain observed GAE excitation and stabilization. The chirping and avalanche behavior of Alfven eigemodes that can influence fast-ion losses in NSTX-U (and burning plasma $\alpha$ losses) has been predicted using a guiding center code with a delta-f formalism [8]. New analysis from NSTX and NSTX-U data has provided a detailed picture of ion cyclotron emission (ICE), being considered as a possible diagnostic of confined $\alpha$’s in burning plasma experiments [9]. A self-consistent resonance-broadened quasi-linear (QL) model has been developed for relaxation of fast ion distribution function by Alfvenic modes [10]. 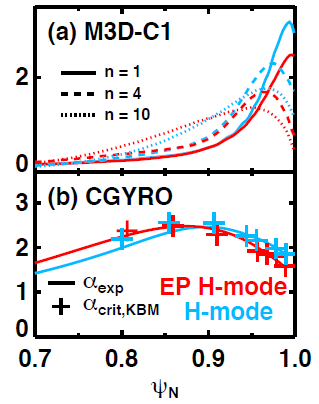 RF physics: A new 2D full wave code (FW2D) has been updated to predict the sensitivity of SOL losses to variations in the realistic boundary shape for high harmonic fast wave (HHFW) heating [12]. Losses are further predicted to be minimized when the SOL density is near the critical density for fast wave cutoff, as found in experiments. Calculations of HHFW deposition in the presence of NBI using AORSA identify a competition between electron and fast ions absorption [13]. Additional simulations show that a sufficient concentration of H+ minority species could open up new HHFW heating scenarios in NSTX-U without NBI.

Scenarios & Control: A unified, physics-based reduced model for direct inductive startup, which computes the timing of plasma initiation and duration needed for plasma density buildup, has been developed for both NSTX-U and MAST-U [14]. Physics-based control-oriented models have been used to develop advanced-control approaches to determine neutral-beam current-drive requirements and evolutions to track prescribed current profiles in closed-loop [15], as well as to iteratively optimize the access to high-performance scenarios [16]. Aided by this is the development of a neural network-based description of beam heating and current drive profiles, well suited for rapid calculations and real-time application [17]. Development of a physics-based algorithm for closed loop feedback control of snowflake divertor configurations will provide real-time tracking and control capabilities [18].

The NSTX-U Recovery planning is ongoing, with NSTX-U targeting resumption of operations in 2021 [19].

Walter Guttenfelder (Princeton Plasma Physics Laboratory) NSTX-U Research and Recovery Teams
There are no materials yet.