Abstract: The effect of plasma current $I_{p}$ on the current driven by EC waves is studied via numerical approach. It is find that changing of plasma current has a middle impact on ECCD but a large influence on the Ohkawa mechanism dominant current drive (OKCD). Increasing of plasma current makes the ECCD moves slowly into the core region of tokamak plasma, but makes the OKCD shifts rapidly into the edge region. The current drive efficiency increases slowly with the increasing of $I_{p}$ for ECCD, but increases first then dropping for OKCD. These finds may have an important significance in the current ramp-up phase via LHCD and ECCD.
Introduction
Current drive by electron cyclotron (EC) waves has an important role in tailoring plasma current profile and suppressing magnetohydrodynamics (MHD) instabilities. ECCD, which uses the Fisch-Boozer mechanism of EC waves as the dominant mechanism, can drive localized non-inductive current efficiently in the on-axis region ($\rho<0.5$) of tokamak plasmas, but much more inefficient in the off-axis region or the deposition towards the outboard side of the tokamak plasmas ($\rho>0.5$) $^{[1-2]}$. The Ohkawa mechanism dominant current drive (OKCD) $^{[3-5]}$ of EC waves can be possibly used to drive localized off-axis non-inductive current on a tokamak with large inverse aspect ratio or in the region of local inverse aspect ratio large enough. Plasma current in a tokamak, its amplitude $I_{p}$ and profile, has a vital impact on lower hybrid current drive (LHCD) $^{[6-7]}$. Theoretical investigation found that high plasma current can broaden the absorbed LH spectrum and increasing the current drive efficiency, the shape of the plasma current profile also has an influence on the propagation of LH waves and power deposition $^{[6]}$. Experimental studies on the high electron density Alctor C-mod tokamak observed that efficient LHCD is realized at densities up to $1.5×10^{20}m^{-3}$ by operating at increased plasma current $I_{p}$ resulting reduced Greenwald density fraction $^{[7]}$. The plasma current can influence the poloidal magnetic field $B_{p}$ hence the total magnetic field $B$, $B=B_{t}+B_{p}$, where $B_{t}$ is toroidal magnetic field and $|B_{t}|>>|B_{p}| $ in a tokamak. $|B_{t}|$ is inversely proportional to the large radius R of a tokamak. The plasma current possibly has an impact on the ECCD and OKCD for the deposition of EC power on the high field side (HFS) and low field side (LFS), respectively. This study is to analyze the role of plasma current on current drive of EC waves for both the Fisch-Boozer and the Ohkawa dominated mechanism.
Numerical setup
A series of equilibrium files with different plasma current Ip are generated by the EFIT code. Whereas, the shape of the plasma current profile is failed to take consideration in this study. The HL-2M like tokamak with a large inverse aspect ratio (~0.37) is used in the simulation, central magnetic field of this device is set to $B_{T0}=2.25T$ in order to make efficient OKCD in off-axis region for 105 GHz (X2-mode) EC system which is prepared to be installed in the HL-2M tokamak. Another 140 GHz (X2-mode) EC system will be deposited its power on the HFS in this magnetic condition, making the Fisch-Boozer dominant mechanism current drive realized. Central electron temperature and density are 4.6 keV and 5.2×10$^{19}$m$^{-3}$, respectively. The detail kinetic profiles refer to Figure 13 in reference [3]. The GENARAY/CQL3D package suite codes are used to perform the simulations. The toroidal launching angle of EC waves is fixed at $\alpha = 160^{o}$ for both ECCD and OKCD. Therefore, the current direction of ECCD and OKCD is opposite. For each case, the toroidal and poloidal incident angles ($\alpha$,$\beta$) are set constant, the plasma current increases from 0.8 MA to 1.5 MA with interval of 0.1 MA each time, and a special case of 2.5 MA is added.
Results
Figures 1 shows the effects of plasma current on ECCD and OKCD. For ECCD, the normalized minor radius position at peak current $\rho^{peak}_{tor}$ decreases very slowly with the increasing of $I_{p}$, the normalized current drive efficiency $\zeta_{ECCD}$ increases slowly with the increasing of $I_{p}$. The normalized current drive efficiency is defined as $^{[3]}$ $\zeta=3.27\frac{R_{0}[m]}{P_{0}[W]}\int{\frac{n_{e}[10^{19}m^{-3}]}{T_{e}(\rho)(keV)}\frac{dI_{RF}(A)}{d\rho}}d\rho$. The current drive efficiency of on-axis ECCD is much higher than off-axis ECCD. However, for OKCD, $\rho^{peak}_{tor}$ increases rapidly with the increasing of $I_{p}$, $\zeta_{OKCD}$ also increases with the increasing of $I_{p}$. Increasing the $I_{p}$ to 2.5 MA, the $\rho^{peak}_{tor}$ reaches 0.92, and the $\zeta_{OKCD}$ drops to ~0.07 due to much higher electron collisionality, while $\rho^{peak}_{tor}$ is around 0.61 when $I_{p}$ = 0.8 MA.
Fig 2~3 show the results of OKCD and ECCD at the radial position corresponding to the peak value of their driven current profile. The red-dotted lines are trapped-passing boundary (TPB) lines. Fig 2 (a) shows the contours of the EC quasilinear diffusion strength in velocity space, the resonant lines of EC are close to the right TPB, this makes the Ohkawa mechanism dominant over the Fisch-Boozer mechanism, resulting a net positive current are generated around the velocity space of 0.1 $u/u_{norm}$. Fig 3 shows the results of ECCD which are similar to the Fig 2. Fig 3 (left) shows off-axis ECCD at $\rho$=0.64, although the Fisch-Boozer mechanism is dominant, the Ohkawa mechanism also produces a part of opposite currents. The net driven current is -5.08 $A/cm^{2}$, which is lower than the OKCD at $\rho$=0.69. Even for the on-axis ECCD at $\rho$=0.36, as shown in Fig 3 (right), the Ohkawa mechanism still generated a portion of opposite currents, but total amount from this mechanism is much smaller the contribution from the Fisch-Boozer one. As a result, the net produced current is -28.31 $A/cm^{2}$, which is much larger than the OKCD and off-axis ECCD.
Conclusion
The numerical studies show the effect of increasing of plasma current on the radial position and current drive efficiency of both ECCD and OKCD. It is find that changing of plasma current has a middle impact on ECCD but a large influence on OKCD. These finds may have an important significance in the current ramp-up phase via LHCD and ECCD.
Acknowledgments
This work was supported by Hunan Provincial Natural Science Foundation of China (2018JJ2320), and Excellent Youth Project of Hunan Provincial Department of Education (19B483).

All the authors made the same contribution to the study. 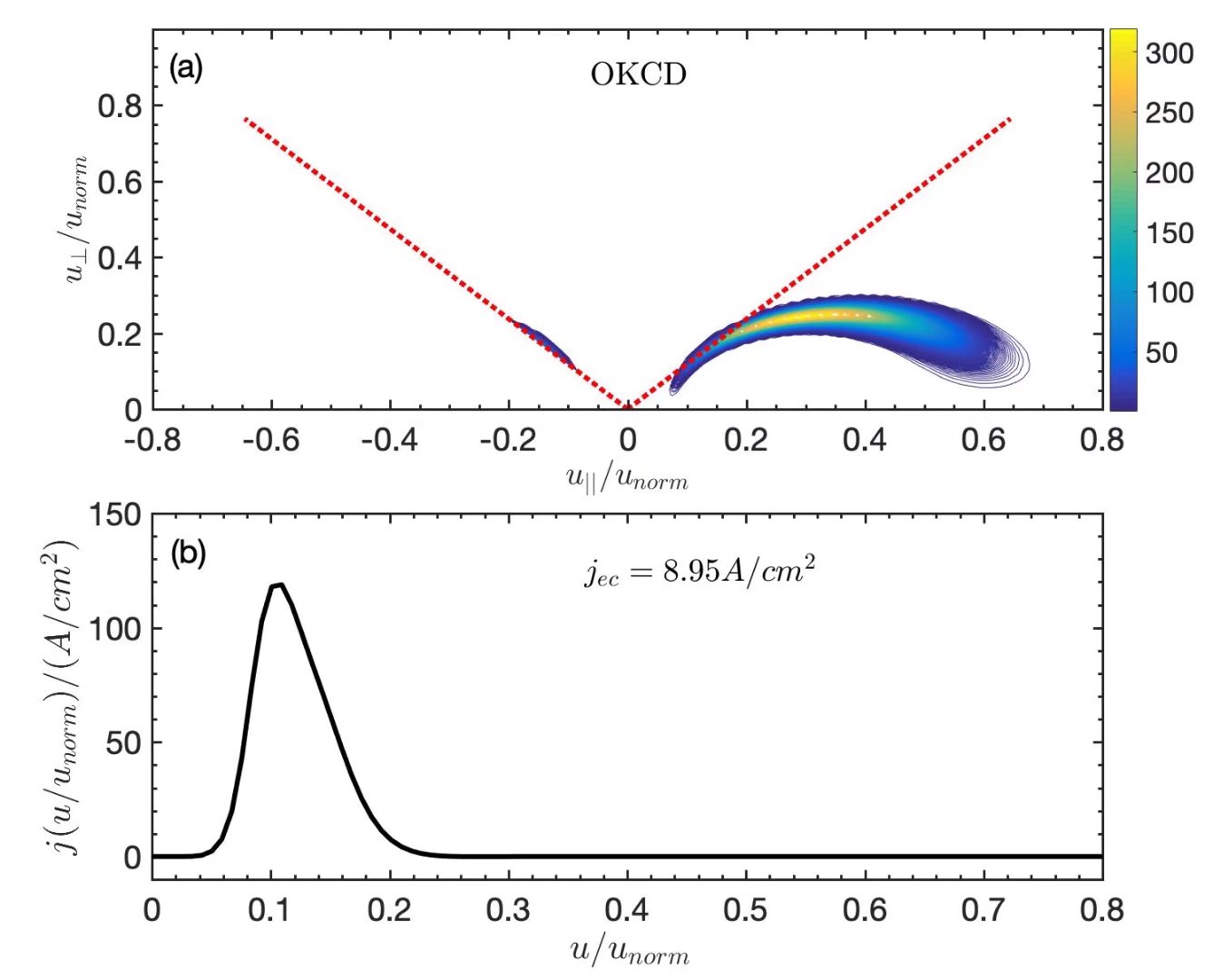