Remarkable progress has been made on the understanding the role of N$_{2}$ and H$_{2}$ puffing on plasma detachment in the divertor simulation experiments using the end-loss region of the tandem mirror device GAMMA 10/PDX. These issues have been experimentally investigated for different target angles using the variable angle V-shaped target system. We have newly observed that Molecular Assisted/Activated Recombination (MAR) processes are influenced by recycling and compression of additionally supplied gases depending on opening angle of the target plate. The results indicate the importance of molecular gas behavior on plasma detachment and have significant implications for the development of divertor configurations in Tokamaks, Helical devices and a future Demo.

High temperature end loss plasmas of GAMMA10/PDX provide a practical and effective tool for studying detachment phenomena under equivalent conditions for ITER SOL and divertor plasma with high temperature and strong magnetic field. Recently, we have discovered that a combination of N$_{2}$ and H$_{2}$ puffing led to a clear decrease of ion flux to the divertor target [1]. MAR occurs in relatively high electron temperature region compared with three-body/radiative recombination between electron and ion. Therefore, understandings of the detail mechanism of the recombination process associated with molecular gases are important for control of divertor plasma detachment. The target angle is expected to affect plasma detachment through the change of hydrogen recycling processes, as well as local neutral pressure build-up near the corner of the V-shaped target. Interactions between hydrogen recycling and additional gas seeding have a growing importance in optimizing divertor configurations for Demo. In DIII-D tokamak, Small Angle Slot (SAS) divertor has been developed for this purpose [2]. Our systematic experiments using the variable angle target enable further advances on this front, along with the ongoing SAS divertor study in DIII-D [3].

To uncover detailed physics mechanisms responsible for the small angle, experiments of different target angles has been conducted using a variable angle V-shaped target system in the divertor simulation experimental module (D-module) at the end region of GAMMA 10/PDX tandem mirror device. Figure 1 shows a schematic diagram of inside of the module. The V-shaped target is covered with tungsten plate. As a key diagnostic, Langmuir probes are mounted on the V-shaped target (#1-5) as well as near the plasma inlet. A movable Langmuir probe in x-direction is installed at the inlet of the module. To introduce additional gas puffs into the D-module, three gas injection lines are employed as shown in Fig. 1. Balmer emissions, H$_{\alpha}$ and H$_{\beta}$, were measured in order to evaluate amount of the neutral H flux and degree of MAR at several positions in the module. 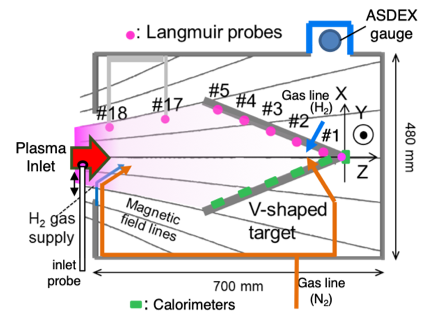 Figure 2 shows the images for different target inclination angles, obtained during the hydrogen discharge in the D-module using a high-speed camera with a bandpass filter of H$_{\alpha}$. We found that the intensity decreases near the corner of the V-shaped target plate as the angle is reduced, even though no additional gas was injected. As shown in Fig. 3, in the case of the smallest opening angle, ion fluxes near the corner of the target (#1- 3 probes) clearly decreased in spite of no additional gas seeding. Such a flux drop is possibly due to local neutral pressure build-up near the corner of the target caused by hydrogen recycling processes. 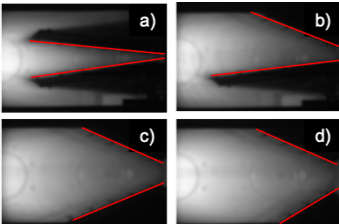 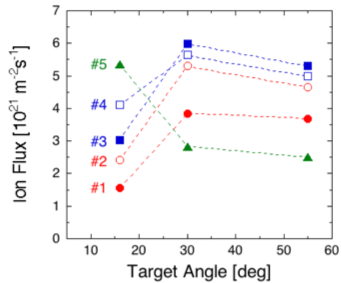 In the case of H$_{2}$ puffing near the corner of the target plate after t~200 ms, ion fluxes decrease after ~300 ms for all target angles as shown in Fig. 4 (a). This shows a strong indication of Hydrogen induced MAR (H-MAR), since the emission intensity ratio of H$_{\alpha}$ and H$_{\beta}$, which indicates degree of dissociative attachment (DA) process in H-MAR, increases with H$_{2}$ pressure, as shown in Fig. 4 (b). The DA process predominantly creates excited hydrogen atom of principal quantum number n = 3. However, the intensity ratio decreases as the angle becomes smaller. This suggests that the reaction chains in the MAR process [4] are changed by the different target angle, even though ion flux reduction for each target angle shows similar tendency. In addition, the influence of compression of additional H$_{2}$ gas at the corner of the V-shaped target should be considered.

In the case of combination gas puffs of N$_{2}$ and H$_{2}$, N$_{2}$ gases are injected from the inlet of D-module and near the corner of target plate after t~80 ms. H$_{2}$ is introduced from the inlet of D-module after t~200 ms. N$_{2}$ pressure was kept within less than 10% of the maximum H$_{2}$ pressure (2~3Pa) during the discharge. It is remarkable that the emission intensity ratio of H$_{\alpha}$/H$_{\beta}$ during combination gas puffs of N$_{2}$ and H$_{2}$ becomes smaller than the case of H$_{2}$ puff only in spite of drastic ion flux reduction for the case of H$_{2}$+N$_{2}$ puffs after ~ 300 ms as shown in Fig. 5 (a) and (b), showing the suppression of H-MAR and enhance of Nitrogen induced MAR (N-MAR), enhanced by the dissociative recombination of NH$_{x}$$^{+}$ followed by H$^{+}$ charge exchange reaction with NH$_{x}$ since the presence of H$_{2}$ and N$_{2}$ in the related conditions of divertor leads to the formation of ammonia by means of heterogeneous and surface reactions during H$_{2}$+N$_{2}$ puffs. The target angle dependence is similar to the case without gas seeding as shown in Fig. 3. These results reveal the importance of further understanding of atomic and molecular processes accosiated with molecular gases and influence of divertor target geometry for improving detached divertor plasma operation. Furthermore, the results also indicate that N$_{2}$ seeding is not only effective at enhancing radiation, but also promoting detachment via N-induced MAR processes. 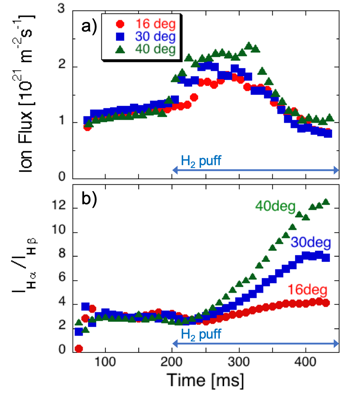 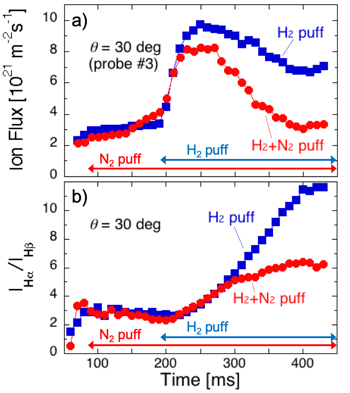