In GAMMA 10/PDX, a divetor simulation experimental module (D-module) was installed for detached plasma study in ITER relevant heat flux conditions. In previous studies, it was difficult to measure far-upstream plasma parameters of the D-module because only probes were used on the target plate. To study the detached plasma structure, a Thomson scattering (TS) system and a microwave interferometer system has been installed to measure the inside plasma parameters of the D-module, and a movable electrostatic probe has been placed at the inlet of the D-module to measure the inlet plasma density and temperature. In addition, TS measurements in the central cell can be obtained. These measurements revealed the entire density and temperature structure from the center to the divertor plate. The average electron density measured by the microwave interferometer showed a rollover behavior during detachment. The results indicated that the ionization region was located around the center of the D-module, and it appears to move upstream along the time. During the formation of detachment, electron temperature increase and density decrease are clearly observed by noninvasive methods for the first time under ITER relevant heat flux conditions.

In this study, using the divertor simulation experimental module (D-module) of GAMMA 10/PDX, the mechanisms of detachment are investigated, reducing heat and particle fluxes to the divertor plate under conditions equivalent to ITER SOL and divertor plasma [1-3]. The detached plasma structure which contains the radiation region, ionization front region, and recombination region, along the magnetic field line toward the divertor plate, was not clearly observed in several divertor experiments. GAMMA 10/PDX confines the main plasma in the central-cell (CC), and the escaping plasma is led to the D-module in the end-cell (EC) to perform divertor simulation plasma experiments. In the D-module, the electron temperature and density are normally measured using the electrostatic probes on the V-shaped target plate. For direct measurements and detailed detached plasma studies inside the D-module, a Thomson scattering system (EC-TS) and a microwave interferometer system (EC-MIF) have been installed. Figure 1 (a) shows the schematics of the experimental setup of GAMMA 10/PDX, indicating the dual-path Thomson scattering system, which contains CC-TS ($z = 0.60 m$) and EC-TS ($z = 10.875 m$), for measuring the electron temperature and density both at the central and end cells, simultaneously, as well as the EC-MIF (EC-MIF3 and EC-MIF4 at $z = 10.786 m$ and $10.766 m$, respectively) for measuring the average electron density. Figure 1 (b) shows the D-module installed at the end cell. For diagnostics, electrostatic probes are mounted on the V-shaped tungsten target plate (#1-5, #1 at $z = 10.968 m$) and a movable electrostatic probe (IP, $z = 10.35 m$) is installed at the plasma inlet of the D-module. 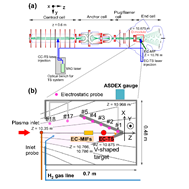 The typical electron temperature and density in the D-module are $1$ ~ $20 eV$ and $0.01$ ~ $1 × 10^{18} m^{-3}$, respectively. To add hydrogen gas puff into the D-module, a gas injection line is installed at the D-module inlet, as shown in Fig. 1 (b). In order to study the formation of the detached plasma structure inside the D-module, the electron density and temperature were measured from the core to edge region using the dual-path TS system, EC-MIF and all probes. The plasma is heated and maintained while applying ICRF waves from $t = 51$ to $440 ms$. The additional hydrogen gas puffing began at t = 50 ms, and the pulse duration was $400 ms$ for $750 mbar$ of plenum pressure in the D-module to produce a detached plasma condition from $t > 200 ms$. The time evolutions of electron temperatures (a) and densities (b) measured by using the CC-TS, IP, EC-TS, and #1 probe, respectively, are shown in Fig. 2; the averaged electron densities measured by EC-MIF3 and EC-MIF4 are also shown in Fig. 2(b). 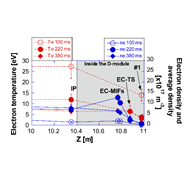 The electron temperatures decreased along with the z-axis toward the V-shaped target plate. The electron density at the IP and the averaged density at the EC-MIFs are almost identical at t = 100 ms before the effect of the additional gas puffing. At $t = 220 ms$, the average electron densities measured by EC-MIFs are much higher than that measured by both IP and EC-TS. This indicates that the ionization front region was located around the measuring region by EC-MIFs (around the center of the D-module) at $t = 220 ms$. The ionization front region in the detached plasma experiments are clearly observed for the first time in GAMMA 10/PDX. It is considered that the ionization front region moves upstream because there is no higher density region in the downstream area.