Capillary porous systems (CPS) filled with liquid metal (Li, Sn) are considered now as alternative approach for plasma-facing components of heavy loaded divertor in fusion reactor 1. This approach is comprehensively tested now using different PSI devices as testbed facilities to analyze the material response to extremely high particle and heat fluxes, attributed to the transient events, like disruptions and repetitive giant ELMs.
Among the favorable effects for LM divertor approach could be strong vapor shielding of exposed surfaces, which decrease essentially both the resulting surface load and erosion. This paper presents experimental studies of plasma-surface interactions during powerful QSPA plasma impacts to the Sn CPS structures in conditions, simulating disruption and ELM-like loads.
Experiments were carried out using two QSPA devices. ELM-like plasma exposures were performed with QSPA-M test-bed facility 2. The important feature of QSPA-M is presence of external magnetic field up to 1T, which allows studies of the influence of B-field on vapour shield dynamics and shielding coefficient. Large scale QSPA Kh-50 device 3 was used to simulate plasma disruptions and giant ELMs, when strong vapour shield dominates in plasma surface interaction, decreasing significantly the energy transfer to the surface.
The plasma stream energy density and heat loads on the surface were measured with set of the movable calorimeters. Optical spectroscopy was used for determination of plasma parameters (electron density and temperature) in front of exposed surfaces and studies of the target impurity behavior in plasma shield during PSI. The plasma pressure was measured by piezoelectric detectors. Observations of plasma interactions with the exposed targets, and studies of dynamics of material droplets and solid dust particles in front of the irradiated surface were performed with a high-speed (10 bit CMOS pco.1200 s) digital camera PCO AG at the exposure time ranging from 1 μs to 1 s, and within the spectral range from 290 nm to 1100 nm. Information from subsequent camera frames (with visible traces of the particles flying from the target surface after a plasma shot) reconstructs velocities of the emitted particles and the instants of their ejection (from the target surface) to be calculated.
Features of CPS target design and corresponding description are presented in Fig.1. 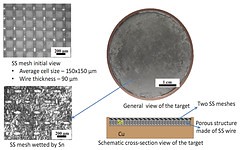 For the ELM- like plasma impacts, variation of the plasma stream energy denstity has been performed to study onset of vapor shield formation and for characterization of shielding layer parameters in dependence on the impacting plasma loads. Fig2 shows some results of calorimetry measurements, which supplemented by CCD imaging of plasma surface interaction for various heat loads.
The performed studies have shown that plasma exposures of Sn CPS target with QSPA plasma heat load < (0.5 MJ/m2) does not trigger the generation of erosion products. For the heat load > 0.5 MJ/m2, but < 1 MJ/m2 single dust particles traces have been registered. Further increase of heat load leads to the splashing of eroded material. For ELM-like impacts rather week melt motion was observed on the target surface. A moderate particle splashing is attributed to the heat loads up to 1 MJ/m2. Mass losses were detected on the level of 0.05 mg/cm2 pulse. Post-mortem analysis has shown that CPS structure was not destroyed in the course of many repetitive ELM-like pulses. Surface morphology after plasma exposures is formed by some cavities in mesh cells due to capillary effects.
It is important to note that the energy density delivered to the CPS tin target is reduced in comparison with similar measurements, performed for flat tungsten surface. This result allows conclusion that for CPS target, due to lower evaporation threshold, the shielding starts earlier and shielding coefficient is more significant. 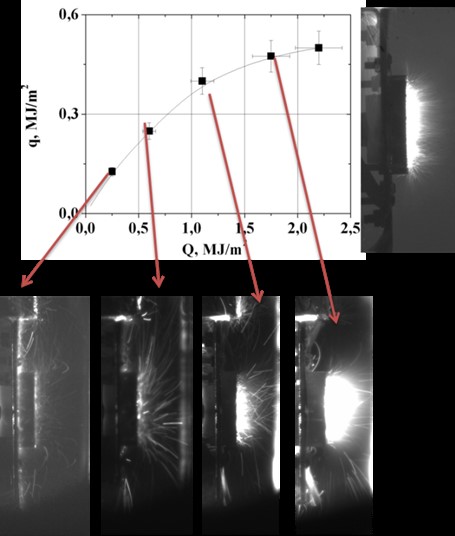 Spectral lines of Sn I – 3175, 3262, 3330 Å and Sn II – 3283, 3351 Å have been identified by optical emission spectroscopy in near- surface plasma. It is confirmed that plasma shield, which consisted mostly of Sn neutrals appears at Q~0.1 MJ/m2. Increase of the surface heat load resulted in intensive emission of Sn II lines, which started to be observed at Q ~0.3 MJ/m2. The continuum intensity increases significantly at Q> 0.5 MJ/m2, which corresponds to the strong shielding of the exposed surface (Fig.3). It was shown that plasma electron density in shielding layer near the surface achieved rather high values. Measured chord averaged Ne=(1-3)1023 m-3 and it weakly depends on further increase of the energy density in plasma stream. This dense plasma shield is completely not transparent for the impacting plasma, being considerably larger than the particle free path length. 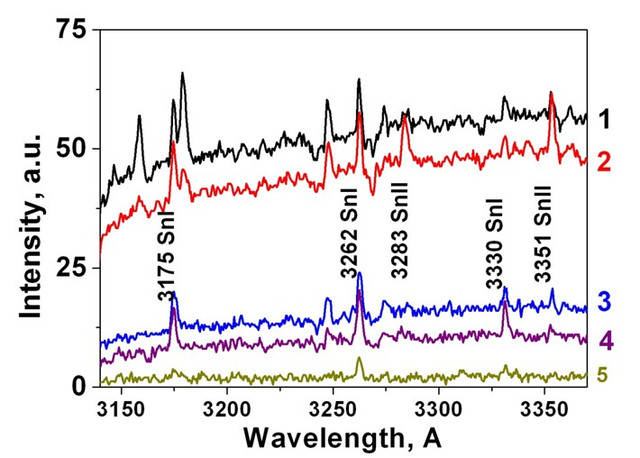 For disruption simulation experiments, it was shown that in conditions of strong melting and evaporation, development of instabilities in melted layer determines the resulting surface relief in the course of plasma exposures. Also it results in melt motion and pronounced particles splashing from the surface. In some cases, delamination of CPS has been observed for disruptive heat loads. As result, significant erosion of the target is observed. Mass losses achieved 6.85 mg/cm2 pulse.
Comparison of obtained experimental results on vapour shielding of Sn CPS with available data from numerical simulation using the TOKES code 4 has been performed also. Relevant discussion is presented in the paper.

Acknowledgement: This work has been carried out within the framework of the EUROfusion Consortium and has received funding from the Euratom research and training programme 2014–2018 and 2019-2020 under grant agreement No. 633053. The views and opinions expressed herein do not necessarily reflect those of the European Commission. Work performed under EUROfusion WP DTT1-LMD.