The achievements of the present study are summarized as follows:

The construction of the Linear IFMIF Prototype Accelerator (LIPAc), which is a prototype of the IFMIF (International Fusion Materials Irradiation Facility) deuteron accelerator aimed to validate the acceleration of deuterons up to 9 MeV with a beam current of 125 mA in CW, is progressing at Rokkasho, Aomori, Japan [1]. It was reported in 2018 that the installation of the novel RFQ accelerator was completed and the beam commissioning was just started with proton [2]. The beam commissioning of RFQ has been progressing significantly since then, and the acceleration of the world highest current deuteron beam of 125 mA to 5 MeV (1 ms, 1 Hz pulsed beam) was succeeded for the 1st time on 24th July 2019 [3]. The configuration of the accelerator components and the beam current measuring points are shown in Fig. 1. This study aimed to evaluate the amount of beam loss by measuring quantitatively neutrons generated during the deuteron acceleration experiment at high current in order to verify the accelerator design concept to control activation by avoiding and localizing beam loss at high energy.
In the deuteron commissioning, neutrons are generated by several different mechanisms, i.e. the nuclear interaction of deuteron with aluminum of the beam dump, the interaction with copper in RFQ or other components and the DD reaction due to the accumulation of deuterium in RFQ. In order to detect neutrons produced, several different methods were utilized. The foil activation method was used to determine the absolute neutron flux and also to obtain the information on the neutron spectrum. Four different materials having different threshold energies for nuclear reaction, i.e. Nb, Al, Ni and In, were placed near the beam dump at the end of the accelerator. In addition to that, 36 Ni foils were placed in many different locations along the accelerator. For measuring the real time evolution of the neutron production, 5 3He proportional counters combined with a polyethylene moderator (see Fig. 1) were placed on the low energy section of the RFQ cavity and next to a scraper of the Medium Energy Beam Transport (MEBT) section after the RFQ, where the beam loss is expected according to the simulation [4].
The result of the foil activation method showed that the high energy neutrons were produced on the beam dump by the interaction of 5 MeV deuterons as expected. The trace of a significant beam loss was observed only at the scrapers of MEBT, and the amount of the beam loss in the other places after RFQ was very small. This result proves that the RFQ cavity is working properly as predicted by the beam dynamics calculation. From the 3He detector measurement (see Fig. 1 for their positions), some interesting trends of the neutron production were observed. Fig. 2 shows the time evolution of the neutron production rates measured by the 3He detectors during the 100 mA deuteron acceleration. When the cavity voltage (Vcav) of RFQ was decreased, the neutron production measured at the position #4 gradually increased, and then that at the position #3 increased also. At the same time the difference of the input current (LEBT ACCT) and the output current of RFQ (MEBT ACCT) was increased. This result suggested that this neutron probe successfully detected neutrons produced by the beam loss in the RFQ cavity. The behavior is in accordance with the prediction by the beam dynamics simulation that the beam loss mainly occurs at the beginning of the RFQ and its amount and point of loss shall increase and move to upstream side when Vcav is lowered.
The quantitative measurement of such beam loss conducted in this study provides useful information for understanding the physical behavior of the accelerator. The result confirmed that the RFQ cavity was working as expected. The quantitative understanding of the beam loss is extremely important for proceeding to the long pulse operation planned in this year. 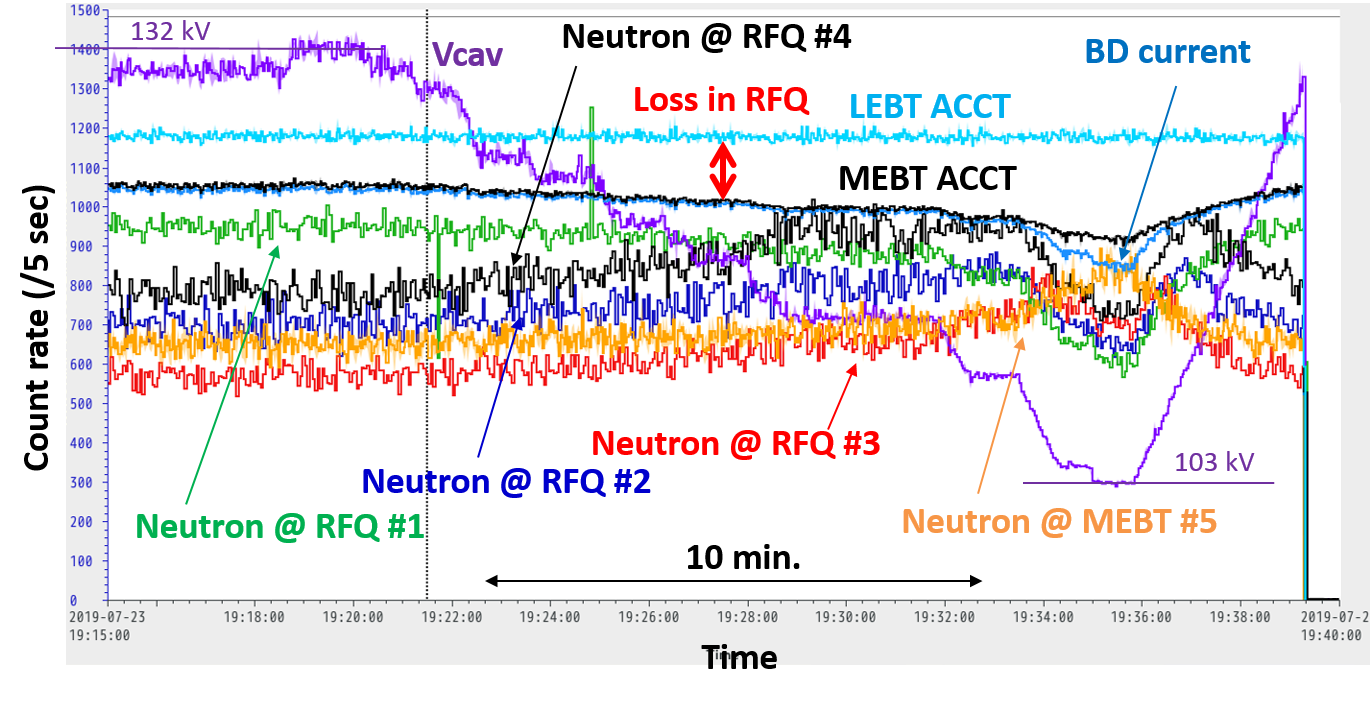