We established a conceptual design of Advanced Fusion Neutron Source (A-FNS). In order to obtain irradiation data required in qualifying materials of fusion DEMO DT reactor, we newly designed nine test modules to be implemented in the A-FNS. The design of test modules is based on a new distinctive maintenance scheme: ‘horizontal maintenance method integrated with the shielding plug’. The maximum dpa of F82H specimens in the test module was about 10 dpa/fpy, which was designed to fulfil critical requirement by accumulated irradiation for two years. We carried out preliminary estimation of tritium migration for the lithium target system. It was found that $10^{5}$$m^{3}$/h of continuous ventilation and a couple of 30m$^{3}$ drainage tanks for weekly wastewater discharge were needed.

1. Introduction
In the Japanese Project of development of fusion power plant, one of the key milestones is to acquire initial irradiation data on fusion DEMO DT reactor materials by using a fusion neutron source around 2035. In particular, obtaining irradiation data is required on the followings; (1) blanket structural and functional materials, (2) divertor functional material, (3) tritium behavior and nuclear property in the blanket, (4) diagnostic and control devices. To meet these requirements, we plan to construct Advanced Fusion Neutron Source (A-FNS) facility at QST in Rokkasho, on which we have been conducting design activities[A]. The A-FNS is expected to generate 6.8 x $10^{16}$ neutrons/s by nuclear reactions between 40 MeV deuterons and lithium. The A-FNS facility is mainly composed of an accelerator facility, test facility and post irradiation examination (PIE) facility. The test facility is composed of a lithium target system, test modules, test cell and access cell. The lithium target and test modules are to be installed in the test cell, and the replacement will be done through the access cell by remote handling. A critical issue in the design is to establish a concept of the test modules for acquisition of the abovementioned irradiation data while enabling remote maintenance of the test modules. We have conducted conceptual nuclear, thermal, structural and remote maintenance designs of the test modules.

2. Test modules
While in the previous study we proposed the basic idea on the irradiation capsule for the A-FNS[A], in the present study we have established new conceptual designs on the following nine test modules (TMs); (1)Blanket Structural Material TM (BSM-TM), (2)Divertor Functional Material TM (DFM-TM), (3)Blanket Functional Material TM (BFM-TM), (4) Activated Corrosion Product TM (ACP-TM), (5)Tritium Release TM (TR-TM), (6)Creep Fatigue TM (CF-TM), (7)Diagnostic and Control Devices TM (DCD-TM), (8)Blanket Nuclear Property TM (BNP-TM), (9)Neutron Flux Measurement Module. Each TM has particular test tasks and temperature properties. We performed nuclear analyses, resulting in the neutron flux map shown in Fig. 1 together with the locations of all the nine TMs. Figure 2 shows an enlarged view of the BSM-TM, DFM-TM and BFM-TM installed in a single irradiation vessel, where the BSM-TM is located on the side facing the lithium target. The irradiation vessel is configurated to endure an inner pressure of a helium gas coolant by means of a race-track shaped box structure. The TMs in the irradiation vessel consist of honeycomb vessels, each containing a cylindrical irradiation capsule as schematically shown in Fig. 2. The small test specimens are to be installed in the cylindrical capsules. In order to control the temperatures of the test specimens during irradiation, three pairs of electrical heaters are attached to each of the cylindrical irradiation capsules on their outer surfaces.

The closest capsules are placed at 5 cm distance from the target assembly from both viewpoints of uniformity of the dpa distribution in each capsule and the maintenance by the remote handling means[B]. The capsules are installed with 10 rows in the beam direction and 9-10 rows in the direction orthogonal to the beam direction. As the results of the nuclear analyses, the maximum dpa of F82H specimens in the BSM-TM and Cu specimens in the DFM-TM was found to be about 10 dpa/fpy and 3.2 dpa/fpy, respectively, which are designed to fulfil critical requirements for the initial irradiation campaign, namely 20 dpa for F82H and 10 dpa for Cu, by accumulated irradiation for two years and three years, respectively. We performed thermal analyses on the BSM-TM to determine the basic concept so that the temperature in the capsules could satisfy the design requirements of 300±10℃ and 500±10℃.

3. Accelerator and Lithium target system
We have designed the accelerator and the lithium target system, with utilizing findings and lessons learned in IFMIF/EVEDA[C]. Although the basic specifications of the A-FNS are the same as those of IFMIF, we made improvements implemented to some sub-systems and components of concern[D]. As for the tritium processing system, we aimed at a system that is composed of the existing technologies. We carried out preliminary estimation of tritium migration for the lithium target system. As for the ventilation and the drainage system against tritium, it was found that at least approximately 105 m3/h of continuous ventilation and a couple of 30 m3 drainage tanks for weekly wastewater discharge were needed. These specifications will be achievable within the present technology readiness. 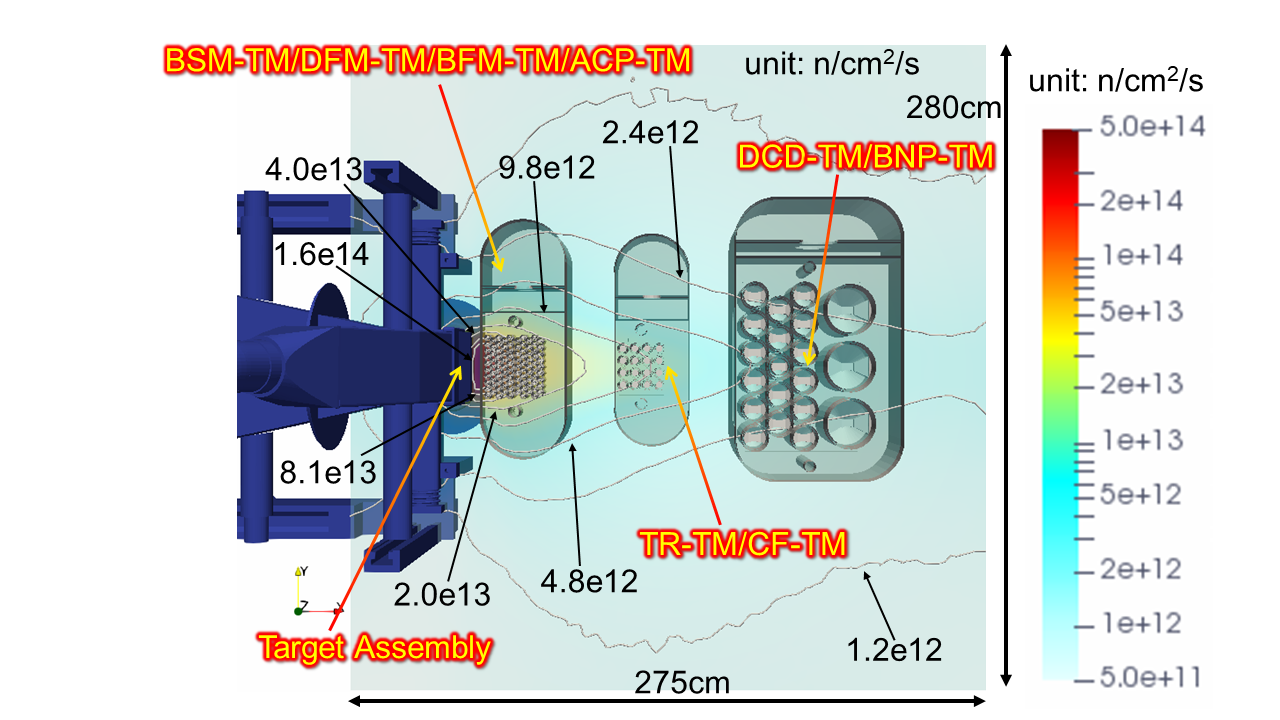 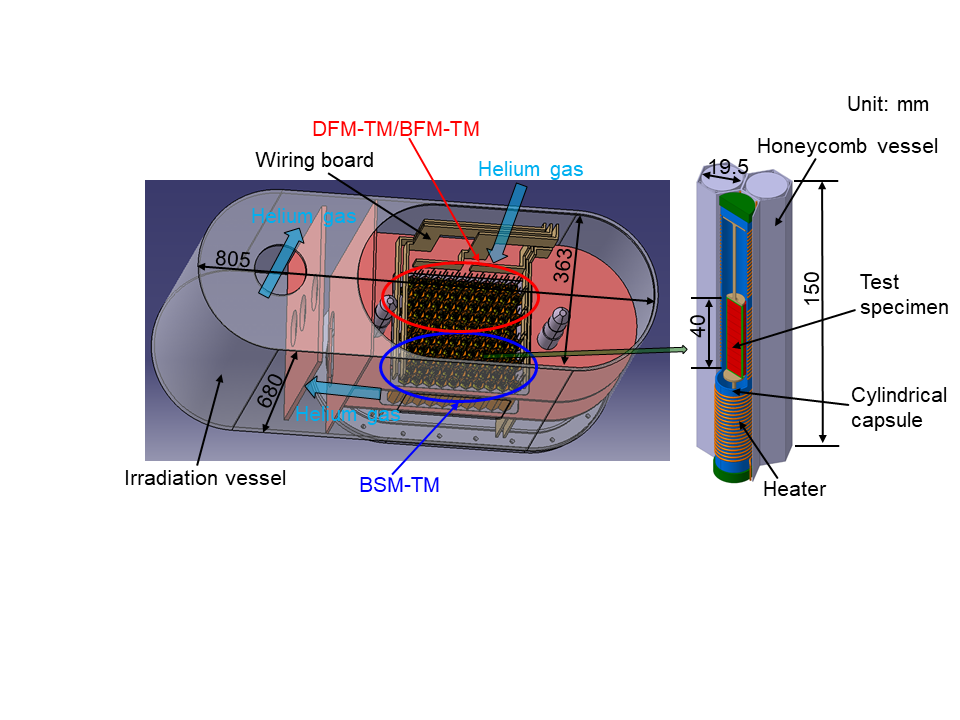 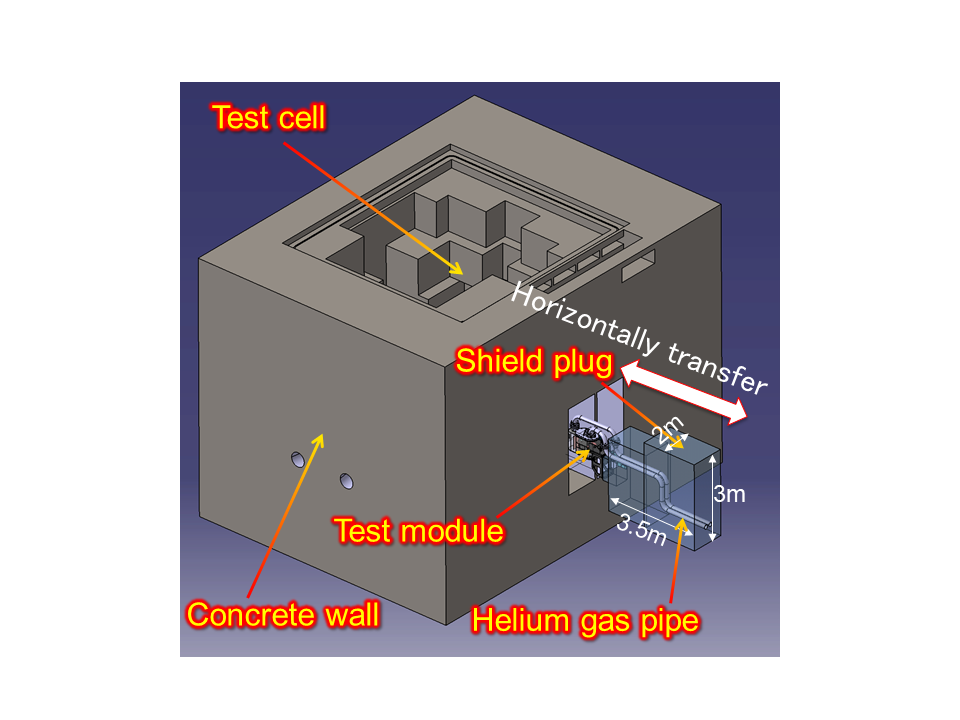