1.Introduction
As the world’s electricity demand is increasing rapidly with the growth of developing countries, the world faces many energy-related challenges such as the mitigation of greenhouse gases, fossil fuel depletion, and the safety of nuclear energy. Therefore, the world is considering the development of a next-generation energy source to solve those challenges. In particular, according to the new energy policy in Korea, investment in renewable energy has increased greatly as the next-generation energy source. However, this energy is not regarded as the baseload of electricity power because of its inconsistent production based on present technologies. That is the reason why fusion energy is considered as the new energy source that can be replaced by nuclear energy as an alternative baseload of electricity power. This research was intended to analyze the economic effects and to forecast the future fuel mix in the power sector with fusion power penetration of the electricity market in Korea by using the System Dynamics methodology.

2.System Dynamics Model
“System is a group or combinations of interrelated, interdependent, or interacting elements forming collective entities”1. This means that elements that a system consists of have interactions between themselves, affect each other and influence the result of the system. Since most of the systems in the real world have complexities and uncertainties, it is almost impossible to design the system model equally as the real-world system. The System Dynamics methodology developed in 1960 is a tool of modeling the system thinking[2]. It explains that the cause of the dynamics of the system came from a feedback-loop and a time delay. Also, it emphasizes that most of the interactions consisting of the feedback-loop are non-linear rather than linear[3]. Through the System Dynamics methodology makes the model simplify visually, it helps to find the cause of a non-linear feedback structure between components which made up a system. Also, it is specialized to forecast the impact on a system by policies’ changes, through finding the cause of results by the interactions. Especially, using system dynamics in the energy system area can make possible to get results by multiple criteria unlike traditional methodology such as WASP that makes solutions by a single criterion.
This research focused on developing the Korean energy mix system used for the analysis of system changes of the Korean fuel mix in the power sector when fusion power enters the mix, and also the conditions needed to ensure the competitiveness of fusion as an energy source. To develop the model, this research drew the causal-loop diagram (Fig. 1) consisting of several factors that determine the Korean fuel mix and set a formula between the factors. Though there are many elements to determine the Korean fuel mix, the model was limited to the present energy sources (nuclear, fossil, water, wind and solar) and the fusion which is supposed to be entered only into the system from the technology advances as a new energy source. In addition, this research used sets of data on fuel price and thermal efficiency by each energy source, cost of carbon emission, and total demand for electricity. 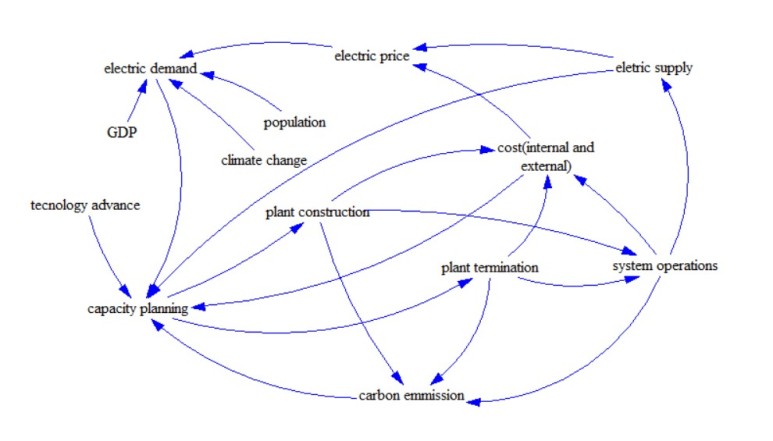 3.Results and Summary
The results show that the technology readiness of fusion energy is a critical factor to enter the mix under unusual circumstances that Korean electricity demand is expected to increase gradually. Also, fusion power has to reduce capital costs such as construction and maintenance costs to be more competitive. The model to predict energy consumption in Korea will be improved with the data of the detailed Korean population forecasts.