A new design of the compact helical fusion reactor, FFHR-b2 (Fig. 1), is proposed. The main mission of the FFHR-b2 is to comprehensively demonstrate new technologies of the HTS (High-Temperature Superconducting) magnets, the metal pebble divertor, and the liquid blanket systems under a fusion reactor condition. Verification of TBR (Tritium Breeding Ratio) > 1 and neutron irradiation on HTS magnets up to 10$^{23}$ n/m$^{2}$ of neutron fluence are considered in the operation plan. These are possible with moderate fusion power of ~7 MW. To promote commercial uses of the FFHR-b2 as a volumetric neutron source, the construction cost of < 300 billion JPY must be also proven. 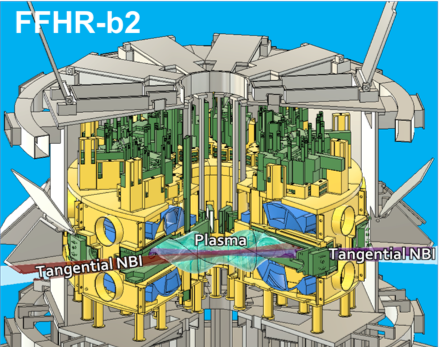 The FFHR-b2 is a beam-driven magnetic confinement fusion reactor using the magnetic field generated by external superconducting magnets. Since the plasma current is not necessary, the steady-state operation as long as one-year is easier compared with tokamak neutron sources. Since neutrons are volumetrically generated in a magnetically confined plasma, the neutron irradiation area can be significantly larger than those of accelerator neutron sources. The FFHR-b2 is a multipurpose HEVNS (HElical Volumetric Neutron Source) [1] equipped with three new technologies of the HTS NI (No-Insulation) -WISE conductor [2], the metal pebble divertor [3], and the cartridge-type liquid blanket [4]. The NI-WISE conductor has a merit of easy coil fabrication. The metal pebble divertor can realize a high heat load tolerance and an effective particle exhaust simultaneously. The cartridge-type liquid blanket can shorten construction and maintenance periods. Although these new technologies are quite beneficial to make the future fusion reactors more attractive, it is necessary to test them in a fusion reactor condition. The FFHR-b2 can be the CTF (Component Test Facility) to irradiate neutrons on the HTS magnet and in-vessel components. At the same time, the FFHR-b2 can also play a role of commercial neutron source for material studies, isotope production, medical use, and so on.

The FFHR design group is proposing a step-by-step approach [1] as listed in Fig. 2, i.e., starting from the LHD, through the FFHR-a1 as the cold test device, the FFHR-b1 as the HEVNS, and the FFHR-c1 as the experiment/prototype reactor, toward the FFHR-d1 as the DEMO/commercial reactor. In the latest design of FFHR-b2, several points have been changed from the former FFHR-b1 design in Ref. 1: (1) The device size is 1.4 times increased from $R_c$ = 3.90 m to $R_c$ = 5.46 m to enlarge the blanket space, (2) The $B_c$ is reduced from 5.7 T to 3.3 T (the maximum magnetic field strength on the superconducting magnet, $B_{max}$, is reduced from ~13 T to ~7.5 T) to keep the same magnetic stored energy as the former design, (3) The helical coil pitch parameter, $\alpha$, is changed from 0.1 as in the LHD to 0.0, to improve the MHD stability and the neoclassical transport simultaneously [5], (4) the magnets are consisted of the NI-WISE conductor cooled by the subcooled liquid nitrogen of ~65 K, (5) the tungsten helical divertor and the metal pebble divertor are adopted in parallel, (6) the cartridge-type liquid blanket is adopted for the blanket, (7) the austenitic stainless steels are chosen as the main structure materials, instead of RAFM (Reduced Activation Ferritic/Martensitic) steels, to reduce the construction cost, and (8) a tin-lithium alloy (e.g., Sn-25at.%Li) is adopted as the common working material for the metal pebble divertor and the liquid blanket.

The WISE conductor is a new conductor, where simply stacked HTS tapes are bundled with a metal flexible tube [2]. Because of the high-flexibility, it is quite easy to wind the helical coils. After the coil winding process is completed, the coil is heated up to ~100℃ and impregnated with a low melting temperature alloy as the U-Alloy78 (Bi$_{57}$Sn$_{17}$In$_{26}$, melting point ~78.8℃). It is possible to use this WISE conductor without insulation, i.e., as the NI-WISE conductor. Both heat conductivity and heat capacity of the conductor increase when the insulation is omitted. The metal pebble divertor is a newly proposed limiter/divertor system using falling massive pebbles of tin-lithium alloy as the target material [3]. In the FFHR-b2, ten modules are installed near the inner ports to inject the pebbles to the inboard-side ergodic layer surrounding the main plasma. The pebble flow plays a role of limiter inserted to the ergodic layer. Recombined neutral particles can be effectively exhausted through the gaps between the pebbles. The pebbles finally fall into the pools set in the lower ports of the vacuum vessel (Fig. 3). The pools are filled with melted tin-lithium alloy and all pebbles are melted in the pools. The cartridge-type liquid blanket has been improved from the former version, e.g., the number of cartridges is halved and tangential ports for the tangential NBI (Neutral Beam Injection) heating are equipped [4]. Melted tin-lithium alloy flows from top to bottom of the tritium breeding blanket cartridges and exhausted to the pools in the lower ports, where pebbles are also exhausted (Fig. 3). Hydrogen isotopes and the heat of tin-lithium alloy are collected inside the pool. Then, a part of the tin-lithium alloy is lead to the shower unit issuing droplets. These droplets are cooled to form solid pebbles and reused in the metal pebble divertor. Another part of the tin-lithium alloy circulates in the cartridge-type liquid blanket. 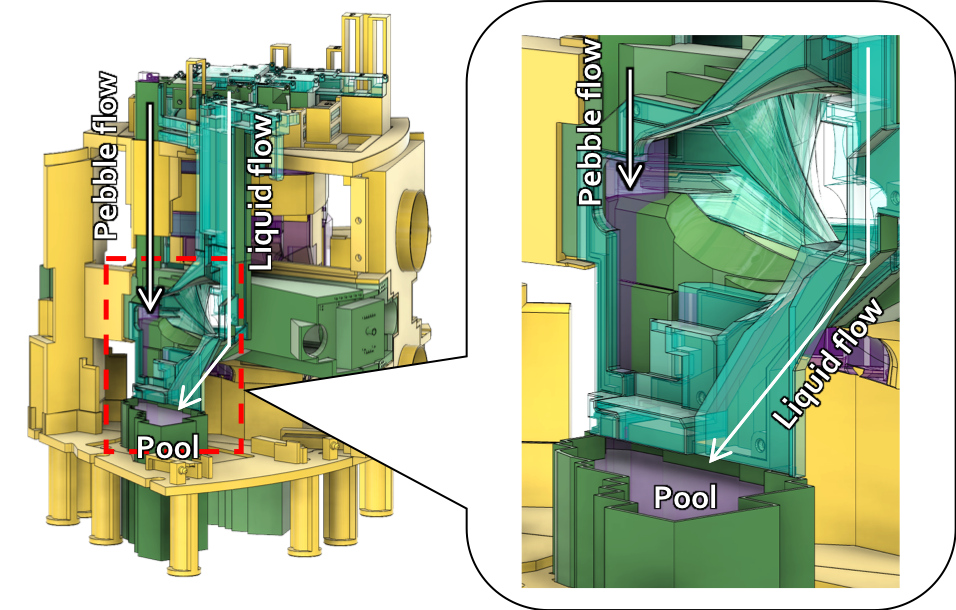