Introduction. - Turbulent transport in magnetically confined plasmas has found to be a global problem where multiple scales play important roles. This is especially true when ultimately dealing with burning plasmas [1,2]. An example - which is the center of the present contribution - is the the interaction between global MHD modes, like Alfven modes (AMs), mesoscale zonal flows (ZF), and micro-instabilities. Burning plasmas have a relevant component of energetic - i.e. suprathermal - particles (EP), as a product of fusion reactions as well as of auxiliary heating and current drive systems. Due to the resonance with EPs, AMs can be driven unstable and become problematic due to their role in redistributing the EP population. ZFs are known to be generated by turbulence and to take part in the turbulence self-regulation. ZFs can also be generated by AMs via forced-driven excitation and they can therefore play an important role in the AM saturation [3]. Moreover, AMs can interact directly with turbulence. In this work, we investigate the nonlinear interplay of Alfvenic fluctuations, turbulence, and ZFs by means of self-consistent global gyrokinetic simulations. Our goal is to contribute to the development of a comprehensive theoretical model predicting global transport properties (in the framework of the Eurofusion project "MET" [4], as described also in Ref. [5]). As a main result, we find that the heat fluxes are increased in the presence of an unstable AM, in the case under consideration.

Model. - The interaction of EPs and EP-driven modes with electromagnetic turbulence has recently raised the interest of the fusion community. This is a numerically demanding problem, therefore various simplified models have been used for the first preliminary studies. The gyrokinetic framework is found to be the most basic model where all main effects - including the resonances of the modes with thermal and energetic species - can be captured. Local (i.e. flux-tube) gyrokinetic simulations have been performed to investigate this problem [6]. Recently, they have shown that marginally stable AMs can have a stabilizing effect on turbulence [7]. Global simulations were also recently performed with the gyrokinetic code ORB5. ORB5 is a nonlinear particle-in-cell code developed
for turbulence studies [8] and later on extended to its electromagnetic multi-species version [9,10]. ORB5 is based on a global model, i.e. it resolves the full radial extent of the global eigenmodes to scales comparable with the minor radius. Due to this feature, it is appropriate for studying low-$n$ AMs, without pushing towards the local limit of vanishing ratios of the ion Larmor radius to the tokamak minor radius.

Alfven modes and turbulence. - In recent ORB5 simulations, AMs have been driven unstable by means of an EP population, on top of a well saturated ITG turbulence [11,12]. An AM is observed to linearly grow, and nonlinearly saturate, mainly due to the radial redistribution of the EP population. A ZF is also nonlinearly generated by the AM, at the location of the peak of the turbulence amplitude. This case has been selected in order to have a separation of spatial (in toroidal mode number) and temporal scales (in frequency) between the AM and the dominant ITG modes. At the time of the AM excitation, the amplitude of the ITG modes is found to be modified at different levels in different parts of the spectra. No sources and sinks are added to the EP dynamics, in order to investigate the effect of the natural relaxation due to the nonlinear interaction with the AM. During the EP radial redistribution, the AM saturates and then its amplitude decreases, going back to levels below the ITG amplitude.

Heat fluxes. - The main effect of the presence of the AM is found to be the modification of the spectrum of the heat flux. This is found, in different amounts, for all three species. The AM and its main second harmonic
are found to dominate the thermal ion heat transport, and even the ITG heat fluxes are found to be increased. In this work, this mechanism is investigated, with main focus on the mutual interaction of the global scale (AM), the meso-scale (ZF) and the micro-scale (ITG). The heat fluxes of the different species are described in the different phases of the simulation. A scan in the EP density allows one to determine the phase transition near the marginal stability of the AM and the different effects on the interaction with ITG turbulence.

In summary, in the present contribution, we show how the dynamics of ITG turbulence is influenced by the presence of EP-driven AMs. The conclusion is that a global analysis of this intrinsically multi-scale problem should be performed, if one aims at realistic predictions of turbulent transport. 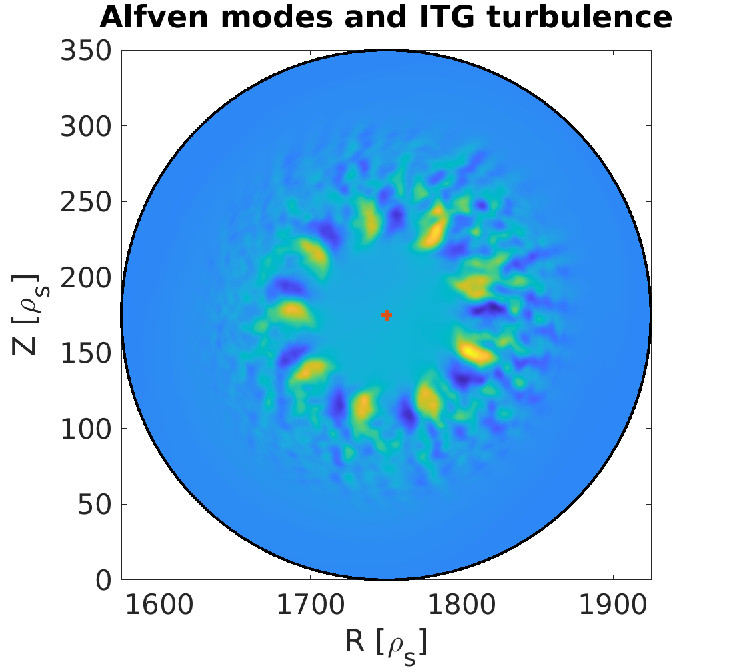