Numerical simulations with the COREDIV [1-3] code of JET hybrid discharge (#92398) with 32MW auxiliary heating, 2.2 MA plasma current and 2.8 T toroidal magnetic field, $H_{98}$ =1.3 without impurity seeding in the ITER-like wall (ILW) corner configuration are presented. The COREDIV code is self-consistent with respect to the core-SOL, as well as to impurities-main plasma and in spite of some simplifications, especially in the SOL model (slab geometry and model of the neutrals) the exchange of information between the core (1D) and the SOL (2D) module renders this code quite useful when, as in the case of the JET-ILW, the interaction core-SOL is crucial. Since the energy balance in tokamaks with metallic walls depends strongly on the coupling between bulk and the SOL, plasma integrated modelling approach has to be applied. From one side, the seeded impurities can, reduce the power to the SOL/divertor regions, due to the increased radiation, leading to reduction of the W influx, but from the other side, they can increase the W production due to enhanced sputtering and could influence the confinement. Therefore, the joined treatment of both regions is necessary. Indeed, hybrid experiments have shown a modest impact of Ne seeding at low-mid levels and greater degradation at high levels. Some plasmas with low confinement in the unseeded case have shown increased H98 as seeding was increased. In the transport model in COREDIV the two different assumptions are used: first-constant H98 factor and second -constant particle and energy transport coefficients (CE=constant). Indeed, by increasing the core radiation with impurity seeding, the net heating power decreases, thus when using the first option transport is reduced in order to keep the total plasma energy constant. In second assumption, the confinement will be changed in the code accordingly with changes in the seeding level. The impurity seeding can affect pedestal confinement, as well as core transport and this effect has not been taken into account in this simulation. In the simulations are used 5 impurities: intrinsic beryllium (Be) (from wall), He (from reaction DT), tungsten (W) (from divertor) and extrinsic neon (Ne) and/or argon (Ar) by gas puff and nickel (Ni). The Ni source is by gas puff in midplane and it remains unchanged for all simulation. The aim of this work is the analysis of the influence of particles extrinsic impurities on the W production, radiation and power to the plate.
First step is the simulation for shot #92398. We have good comparison with experimental results for total, core and SOL radiation, $Z_{EFF}$, W and Ni concentration. Next step is the extrapolation of the results for DT and TT experiments with auxiliary heating of 32 MW without seeding. From the simulations with $H_{98}$=1.3 are observed higher ion and electron temperatures in centre. The ion temperature for DT plasma increases by about 10% and for TT case by about 15%. It is observed, that although Ni and Be have different concentrations (CBe 18 times higher), their effect on the W sputtering is similar for temperature on the plate of about 25eV. Small differences between DD and DT in the radiation level for the case at 32 MW auxiliary heating are observed in the simulations. For TT plasma, the simulation with He gas puff ($C_{He}$= 4.6%) are analysed. This He puff leads to increase the W production. W concentration increases from 1.44x$10^{-4}$ to 1.9x$10^{-4}$, the Z$_{EFF}$ from 1.7 to 1.85 and core radiation increases by 20%.
Next step for analysis is the extrapolation of the results for DT experiments with auxiliary heating of 32 MW and 39MW. Deliberate periodic movement (sweeping) of the high heat flux divertor strike lines has recently used in shot #92398 to manage the heat fluxes experienced by exhaust handling plasma facing components, by spreading the heat loads over a larger surface area. For the 40MW extrapolation cases with radiation 10-13MW, the results [4] indicate that a sweeping amplitude between 5.0–6.0 cm on tile 6 would be required to stay within the tile temperature limit for a 5 s pulse and it may just be possible to execute the pulse without having to introduce additional heat load mitigation, e.g. by impurity seeding. For 39MW auxiliary heating, recalling that in our simulations only Pα arising from thermal reactions is accounted for, the simulations indicate that radiation is 13.7 MW without impurity seeding. In this case (39MW heating), the impurity seeding is not overstated.
It arises the question of: how much, this radiation might influence the confinement. For this reason, we have analysed the influence impurity seeding (Ne, Ar) in the simulations for the case with 39MW auxiliary heating with 2 different assumptions: first-constant H98 factor and second -constant particle transport coefficients ($CE$=constant). The Ne and Ar seeding are effective in reducing the power to the plate to 5MW, but steep degradation of the plasma confinement for Ar seeding is observed in the simulations. In the Fig.1. and Fig.2 are presented ion plasma density in centre and relation between core ($R^{CORE}$) and SOL ($R^{SOL}$) radiation for Ar and Ne seeding for both transport schemes. 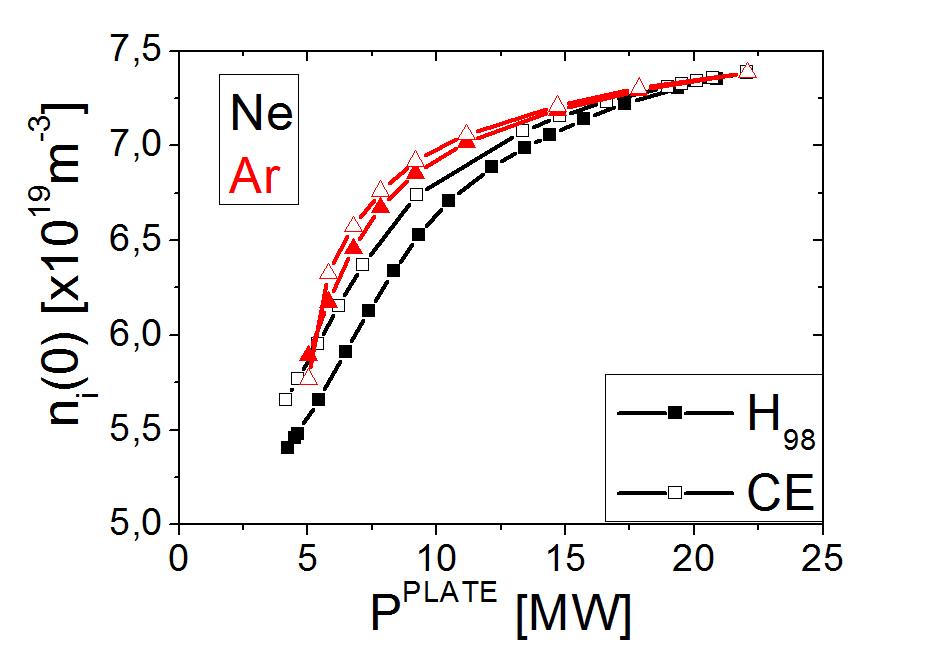 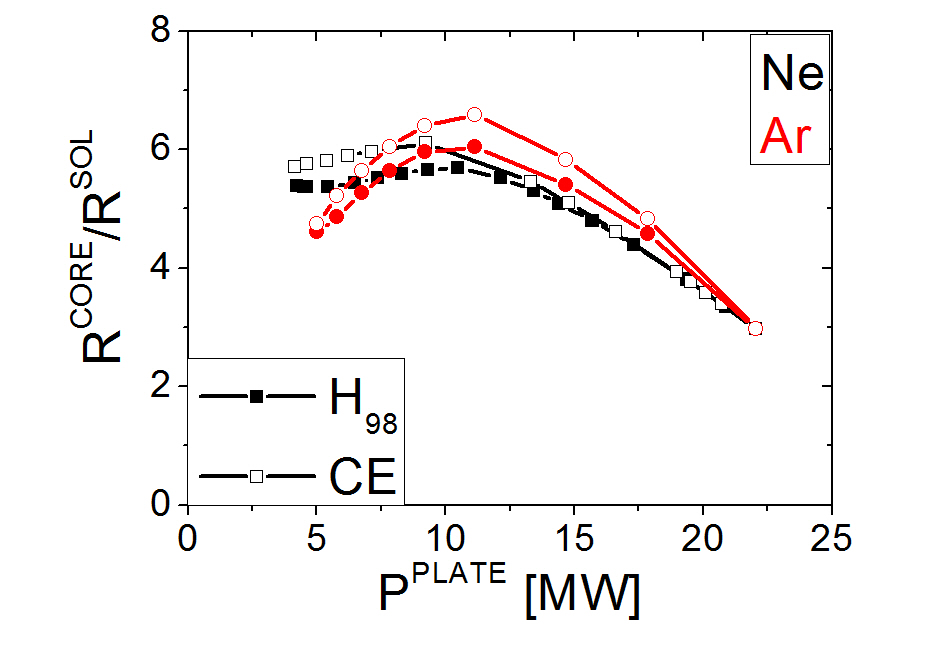 Smaller dilution for both assumptions for the case with Ar seeding are observed in simulation. The $R^{CORE}/R^{SOL}$ is higher for the case with Ar seeding in comparison to case with Ne seeding when $P^{PLATE}$ >7.5MW. In the case, where H98 is constant, we observe increase in the ion temperature with increasing the impurity puff. This has positive effect on the alpha (fusion) production, which increases from 0.96(4.8) MW to 1.5 (7.5) MW for Ne case. Similar situation is also seen for case with Ar. We should note, that with the increase of the heating power to 39MW higher radiation in pedestal is observed.