Introduction
The low aspect ratio spherical tokamak MEDUSA (Madison Educational Small Aspect Ratio Tokamak) built by the University of Wisconsin-Madison (USA) and donated to Instituto Tecnológico de Costa Rica is currently being re-commissioned at PlasmaTEC. The main characteristics of this device (renamed MEDUSA-CR) are plasma major radius $R_o$ < 0.14 m, plasma minor radius a < 0.10 m, toroidal field at the geometric center of the vessel $B_T$ < 0.5 T, plasma current $I_p$ < 40 kA, $n_e$ < 2.00 x 1020 $m^{-3}$, central electron temperature $T_e$(0) < 140 eV, discharge duration is < 3 ms, top and bottom rail limiters, and D shaped plasma volume [ref. 1].
Although MEDUSA was initially constructed for educational purposes, some interesting topics may be addressed with it despite its relatively small size. It serves mainly to merge elementary synergic knowledge between the physics and the engineering involved in controlled plasma discharges and fusion related topics, which in turn could address relevant design concepts for spherical and conventional tokamaks safeguarding the cost-benefit ratio of the device operation [ref. 2].
Engineering work
Several topics were addressed on a first stage of engineering of MEDUSA-CR. A new vacuum system design was developed with a corresponding new design and construction of a stainless-steel vacuum vessel instead of the original glass chamber; this new chamber is presented in the figure below. 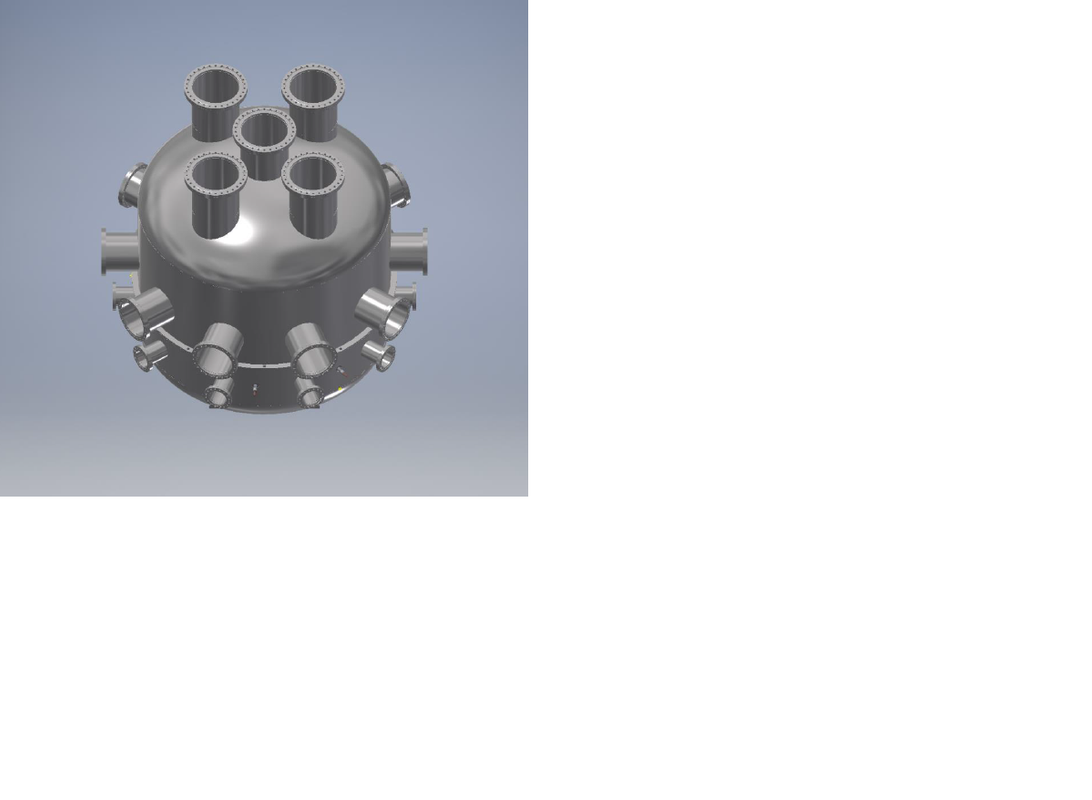 In addition, a new injection system was entirely developed and tested accomplishing the requirements of the device. Also, a bank of capacitors is being re-commissioned to supply the necessary energy for plasma discharges. The current discharge system is divided into three parts; these are the Ohmic coils, the toroidal field coils and the vertical field coils. The original set up of the current discharge of MEDUSA had an issue, namely the saturation on the primary core inducing current, this is the reason why a new design for AC discharges is considered in this new engineering phase.
Simulations
MHD equilibrium simulations have been carried out using a free-boundary solver code named Fiesta (created by G. Cunninham from CCFE). This code allows to explore (among other things), the best plasma-shaping scenarios regarding the beta ratio with different values of elongation and triangularity [ref. 3]. Two main plasma volume cross section were compared, namely the D-geometry and the “bean” geometry, this one is presented in the figure below.