Cooling down of hot wall installed on QUEST that has all-metal plasma facing walls (PFWs) could extend the plasma duration through fuel particle recycling reduction. Particle compression could be observed during the long duration is a charge on a natural divertor configuration with downward ion grad-B drift. These observations could be useful to handle fuel particle balance in steady-state operation (SSO) of future fusion power plants.
The hot wall has been developed to avoid density runaway and massive tritium retention through the control of fuel particle recycling based on the regulation of wall temperature and is expected to be a novel control knob even in self-organized burning plasma. The controllability has been experimentally [A,B] and theoretically [C] investigated using the pre-programmed hot wall temperature. Recently, a new capability, which is wall-cooling for the top side of the hot wall (TWC) became available to support reproducible long duration discharges lasting more than 1000s. Fig. 1 is a comparison of several parameters with and without TWC. The decrease in the top hot wall temperature, starting at 400s, is shown by the blue trace in Fig. 1d. Without TWC, the plasma terminates soon after 700s as denoted in Fig. 1. For both cases, feedback control was used to adjust the fueling to keep the H$_{\alpha}$ signal constant at 0.5V [D].
Wall saturation occurred in both discharges after 400s, although a little smaller amount of gas fueling was used in the plasma with TWC because of accidental gas emission from the PFWs due to strong plasma wall interaction around 70s. The increment of H$_{\alpha}$ and reduction of plasma current, Ip, were concurrently observed around 350 s in the plasma without TWC and both H$_{\alpha}$ and Ip initially became constant, but an additional increase in H$_{\alpha}$ lead to plasma termination. By contrast, with TWC around 400s, the Ip and H$_{\alpha}$ levels were maintained and the pulse extended to around 1100s. However, at a much later time, the plasma terminates in a similar sequence. To investigate the reason for the plasma termination, the spatial distribution of H$_{\alpha}$ signals was monitored with a visible spectrometer and it indicated that the H$_{\alpha}$ signals around mid-plane area initially increased and this was followed by a rapid increase in the top side H$_{\alpha}$ signal which is in the ion grad-B drift direction. This indicates that fuel recycling on the mid-plane area was likely to be more active and more difficult to be controlled by the PFW’s temperature because of the presence of several large ports and insufficient cooling capability there. Previous studies based on the H barrier model has indicated that an unknown source of fuel particle emission after wall saturation being responsible for breaking the fuel particle balance[C]. This indicates the necessity for complete control of the PFW’s temperature and the further challenges for steady particle balance in long pulse discharges.
Improvements to particle exhaust is one way to resolve this issue. In support of this, QUEST is equipped with four cryopumps (one is on the top side and the others three are on the bottom side). By reversing the ion grad-B direction to be downward, more effective particle exhaust can be expected. As expected, we were able to obtain longer discharge with a 423K wall and more than 1h discharge was successfully obtained using an up-down asymmetric hot wall temperature (397K at the top side and 423K at the bottom side) that may enhance the particle compression. A clear up-down asymmetry of fuel particle pressure was observed as seen in Fig. 2. During the discharge, clear up-down asymmetry of H$_{\alpha}$ radiation was also observed. In the discharge, a strong radiation ring around the bottom divertor plate appeared after 2000s. Until approximately 2000s, these three partial pressure values of H$_2$ were similar and constant. The bottom partial pressure of H$_2$ increased gradually and saturated around 2600s, but the others were relatively unchanged. As shown in Fig. 2, the fuel particle compression at the bottom increased by a factor of 20 times compared to the other locations. It should be noted that such compression was never observed in the plasmas with the upward ion grad-B drift direction and symmetric hot wall temperature. Although the main reason needs to be investigated, at least, ion grad B drift seems to play an essential role in the compression. The particle compression is therefore quite promising for maintaining a particle balance.
In conclusion, the capabilities of the hot wall are investigated on QUEST. Recycling control using top water cooling could extend the plasma duration and the capability for significant fuel particle compression was demonstrated. 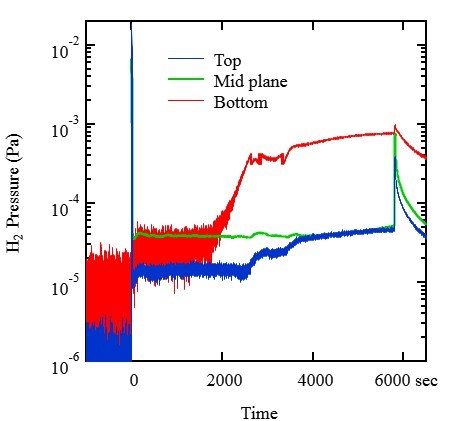