A device modeling the tokamak KTM lithium divertor manufactured and tested.
Tokamak KTM (Kazakhstan tokamak materials science) is a joint project of Kazakh and Russian scientists and has the status of the first technological tokamak for reactor materials science in the world. The main physical parameters of the KTM tokamak are described in ref. 1.
The main task of KTM is research on the interaction of materials with high-temperature plasma, test materials of critical components of future fusion reactors, sources of thermonuclear neutrons and hybrid fusion-fission reactors (in particular, research and testing of divertor plates of various materials and structures).
The principal difference between the KTM tokamak and similar installations is the presence of transport-gateway and receiving-divertor devices. It allows to replace the test samples in the shortest possible time, without depressurizing the vacuum chamber, which greatly increases the speed and volume of measurement of scientific and technical information.
The removal of heat flows with a specific density of 10-20 MW/m2, which are expected on the receiving surfaces of plasma facing components (PFC) of ITER-like and DEMO-like tokamaks, is a critical problem. In addition, the requirement of limiting the temperature of the PFC’s receiving surface at a level not higher than 650-700 ºC is also crucial for liquid lithium-based PFC. Fulfill this requirement will allow controlling lithium flow to the tokamak plasma at an acceptable level. The analysis of the possibility of using traditional coolant for thermonuclear reactors (helium gas, water, liquid metals) showed that the convective heat sink mechanism characteristic of single-phase coolant does not allow to divert such large heat flows at reasonable pressure and flow parameters. Recently, it has been proposed to use a fine water spray in a gas stream (ref. 2). The main advantage of such a coolant is the high efficiency of the heat sink due to the heat of the water—vapor phase transition in the fine liquid phase. The gas phase provides the supply of liquid drops to the cooled surface and the removal of steam. In addition, such a coolant is not inherent in the occurrence of crisis phenomena during heat transfer. This coolant was first used in practice in the design of a cooled liquid-metal tokamak FTU limiter based on the use of a tin-filled capillary-porous structure (CPS) (ref. 3). Its use is provided for cooling the module of lithium divertor (MLD) of the KTM (ref. 4). The same cooling system is considered as the main one for heat removal from the divertor target of the T-15MD tokamak.
To test the design and operating modes of such a cooling system, a special experimental device has been developed that simulates the operation of a MLD of the tokamak KTM (ref. 5). The device is a hollow cylindrical structure (figure 1), the receiving surface of which is made up of a thick-walled copper model of the first wall with a soldered a molybdenum sheet that models CPS. At the bottom of the cylindrical structure a drain pipe and atomizer are welded. Gas and water are supplied to the atomizer. The thermal state of the first wall model and the CPS model is controlled using thermoelectric elements. 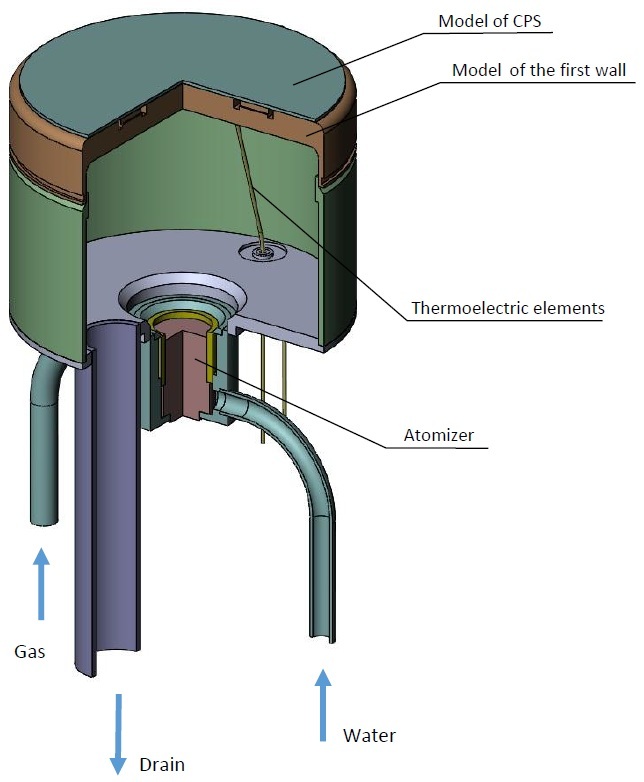 When water and air are supplied to the atomizer, a fine spray is formed, which effectively removes heat from the model of the first wall. The thicknesses of the first wall’s and CPS’s models are selected so as to completely simulate heat transfer by heat conduction from the outer surface of the CPS’s model to the inner surface of the first wall’s model.
The developed experimental device is manufactured and prepared for testing on an electron-beam installation with a scanning beam that provides a thermal load on the receiving surface of at least 5 MW/m2. The experiment scheme is shown in figure 2. 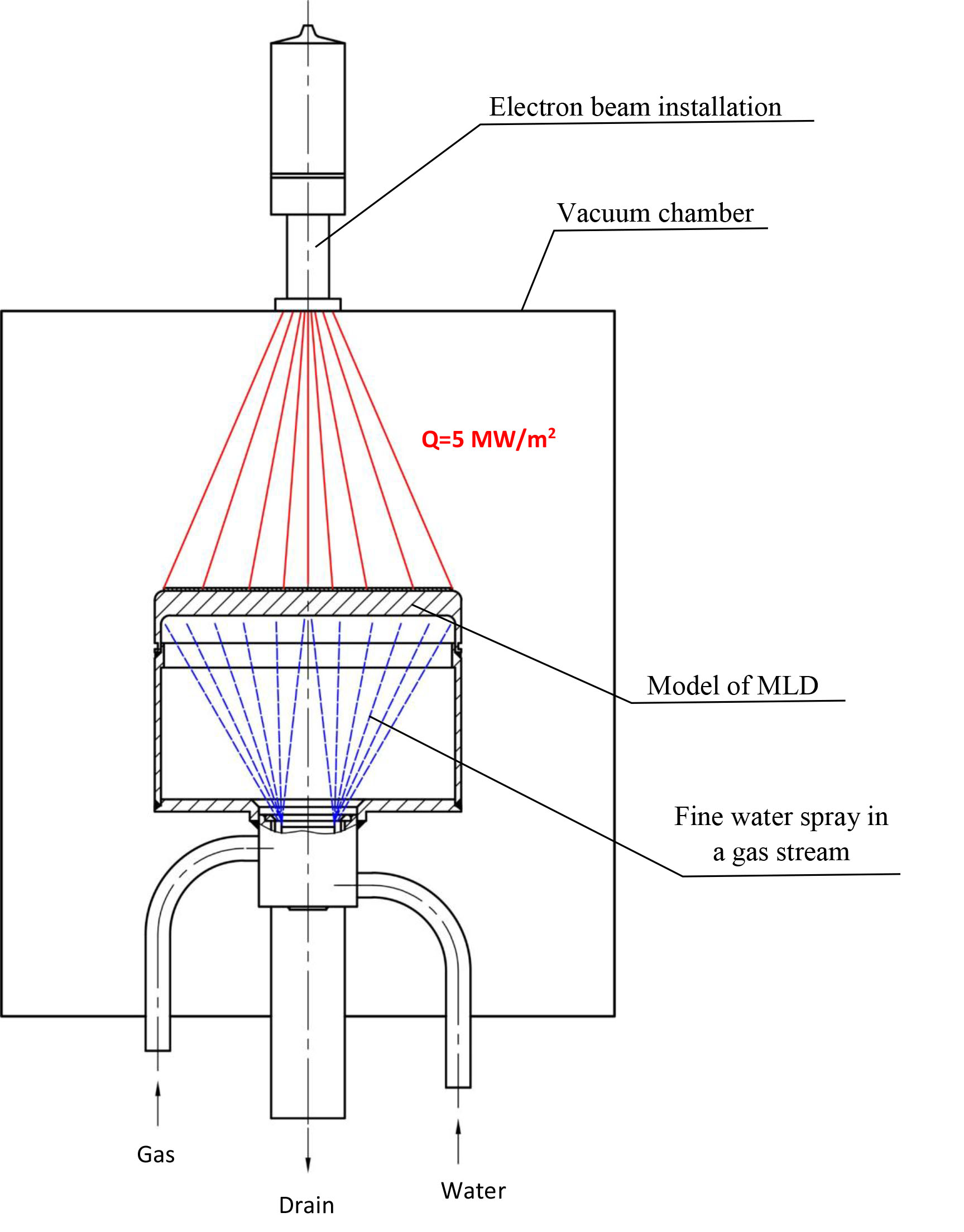 The first results of experiments showed that for stationary exposure by an electron beam with a power density of 5 MW/m2, the temperature on the surface of the model of СPS did not exceed 415°C at a pressure in the water and gas paths of no more than 2 atm. The device showed stable performance during the entire experiment. It is planned to test the model by an electron beam with a power density of up to 12 MW/m2.
Based on previously published works on PFC with a similar type of cooling (ref. 6), the following design solution for the MLD of KTM tokamak is proposed (figure 3). A box structure with a CPS installed on its upper part is attached by means of a bracket on the flange of the tokamak's equatorial branch pipe (figure 3a). The refrigerant channel is the deflectors installed in the inner cavity of the box structure. Mixing of water and gas takes place in atomizers, which are welded to a plate attached to the body and form a single atomizer assembly with it. The coolant is removed through the drain hole and the drain pipe. To compensate for the loss of lithium during operation of the device, a tank is provided in which the CPS has a hydraulic contact with the lithium reserve (figure 3b). If necessary, it is possible to replenish lithium reserves through a special refueling line. The MLD is attached to the cassette using studs mounted on the bottom of the module. External MLD systems are regulated sources of distilled water and gas (air, argon, helium). The removed steam-gas mixture enters the condenser and is cooled in a water—to-water heat exchanger. 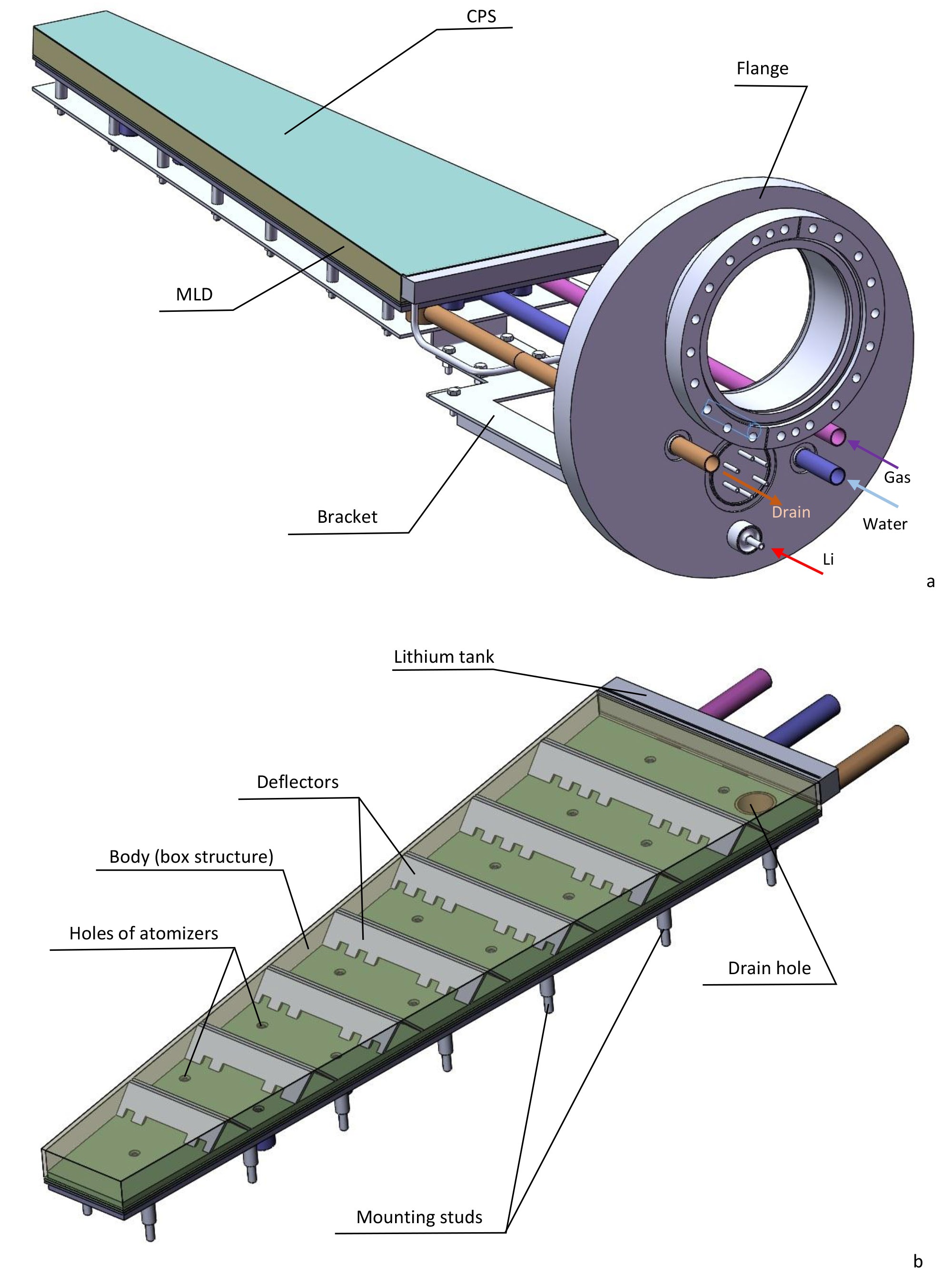 The work was carried out with the financial support of the Ministry of science and higher education of the Russian Federation (unique identifier of the agreement RFMEFI58519X0007).