Fusion research activities in the Republic of Kazakhstan is carried out under the budget programs of the Ministry of Energy; grant financing of the Ministry of Education and Science; within the framework of the Atom-CIS intergovernmental agreement on the joint use of KTM tokamak and the joint KTM research program of the CIS countries; intergovernmental agreement between Kazakhstan and EURATOM in the field of fusion; projects under international contracts (ITER and IAEA CRP project), as well as in accordance with the signed memorandums on cooperation with various organizations of Russia, Italy, Spain, Japan, and Belarus.
The main research areas are:
1. Research in plasma physics using KTM tokamak, improvement of plasma diagnostic methods and control system for collecting and processing of the experimental data /1-2/
2. Simulation studies of plasma-wall interactions using a plasma-beam facility of DС-60 accelerator /3/
3. Study of hydrogen isotopes interaction with structural and functional materials of fusion reactors under reactor irradiation /4/
4. Study of lithium-containing materials of fusion reactor blanket and the promotion of lithium technologies /5/.
The most important event of 2019 for CIS scientific community was the physical launch of KTM Kazakhstani material science tokamak (NNC, Kurchatov). The physical launch was carried out by the joint efforts of RK experts (NNC and IAE NNC) and Russian experts (NRS “Kurchatov Institute” and Efremov Institute of Electrophysical Apparatus (NIIEFA). In accordance with the developed scenario, the following plasma discharge parameters were obtained: plasma current of 100 kA, toroidal magnetic field of 0.9 T, discharge duration of about 70 ms, and a circular cross section of the plasma cord. The efficiency of KTM tokamak was demonstrated by obtaining the plasma in the ohmic mode at reduced parameters. The KTM tokamak appearance is shown in Fig. 1. The main KTM goals are to study the interaction of materials with high-temperature plasma, and to test the materials of critical components of future fusion reactors. The realization of these tasks will be possible when the calculated discharge parameters will be achieved using additional RF plasma heating. The calculated parameters are: plasma current of 750 kA, toroidal magnetic field of 1 T, a discharge duration of about 5s, and divertor plasma configuration. Figure 2 shows the video frames of plasma discharge.
The works are in progress now, and in 2020, a new joint research program for the KTM tokamak will be developed for 2021-2025 in the framework of ATOM-CIS Commission. 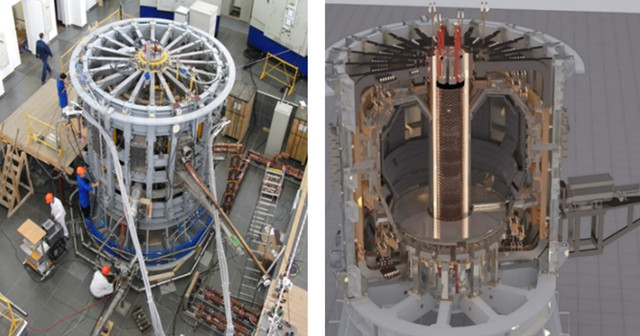 Kazakhstan has a well-developed reactor base (IVG.1M and IGR reactors in NNC RK, Kurchatov, and WWR-K reactor in INP, Almaty) and materials science base. During many years, the following materials were studied in out-of-pile and reactor experiments: beryllium of various grades (produced in RK and USA); graphites, including FP-479 (Germany), used as PFM in KTM vacuum chamber; molybdenum; tungsten of various grades made in Germany (project CRP IAEA); stainless steels; low activated alloys and steels considered as candidate structural materials for fusion reactors.
An example of such projects is the study of the parameters of hydrogen isotope interaction with functional breeder materials: lithium ceramics $Li_2TiO_3$ with 96% enrichment by 6Li /5/. Another task was to study the processes of the tritium and helium release from the lead-lithium eutectic Li17Pb and Li15.7Pb under reactor irradiation. IVG.1M and WWR-K research reactors were used as a source of radiation. As a result, the rates of tritium and helium generation were determined and an analysis was made of the time dependences of tritium and helium release from the samples of lead-lithium eutectic under reactor irradiation /6/. The work was carried out within the framework of the MES project AP05131677/GF5.
As a part of cooperation with ENEA, Italy, the project “Development and manufacturing of demonstration models of KTM tokamak divertor in-vessel plasma facing elements on the base of liquid lithium” /7/ was completed. The mockups of NaK-cooled and uncooled lithium divertor based on a lithium capillary-porous system (CPS) were created and then tested at the KTM experimental complex. Figure 3 shows a model of lithium divertor before and after experiments at KTM tokamak.

In accordance with the Executive Agreement between NNC RK and ITER Organization, IAE NNC RK conducted studies of the trace impurities in the chemical composition of concrete samples by gamma spectrometry after neutron irradiation at IVG.1M reactor. Project goal was to measure the trace elements in the chemical composition of ITER concrete samples. A proper assessment of the concrete activation is one of the key points for accurate determination of radiation dose rate diagrams after shut-down and decommissioning of a reactor. Thus, as a result of the work, the content of elements (Cs, Eu, Sm, Tb, Ta) was determined, which can make the main contribution to the radiation situation in the rooms during the decommissioning of ITER reactor.
In 2019, in support of ITER project, IVG1.M and WWR-K reactors were used for in-situ tests of fiber optic temperature sensors and fiber optics with various coatings (polyimide, acrylic, copper, aluminum). The reactor experiment included the measurements of radiation-induced losses in optical fibers, registration of the time dependence of the changes in the spectrum of transmitted light from the selected source, measurements of the shift of the resonant wavelength and its amplitude in temperature sensors. The total accumulated fast neutron fluence during the experiment was $1.76$ $10^{24}$ $m^{-2}$, the temperature of the samples was 185–206℃. According to the experimental results, the effect of reactor irradiation on the parameters of optical fibers and optical fiber temperature sensors was estimated, which will allow us to choose the optimal material for ITER reactor.
The conducted studies allow us to accumulate extensive experience, train personnel, and create a methodological and hardware base for the experiments on the interaction of hydrogen plasma with structural materials at the KTM spherical tokamak.
Simulation experiments of the reactor irradiation on the interaction of hydrogen isotopes with structural materials of fusion reactors, as well as on the characteristics of structural elements and measuring equipment of the ITER reactor, will help to establish correlation and synergistic effects between the effects of fission and fusion reactors on the materials and components of thermonuclear reactors.