The negative ion beam optics was studied in real and phase spaces. It was found that (i) the negative ion density is the dominant plasma parameter for the meniscus formation, (ii) single beamlet is decomposed by multiple beam components, and (iii) the beamlet focusing by an electrostatic lens in acceleration gap is characterized by the variation of the distance between beam axis of each component.

The beam divergence is not still foreseen to meet a requirement for ITER-NBI, where the target value is less than 7 mrad. Only filament-arc-type negative ion sources have achieved to generate such a low divergence beam. Hence, the detail analysis of the beam properties in the arc-type negative ion sources gives an insight into further improvement of negative ion sources regardless of discharge systems. The important factors to affect the beam optics are the shape of a meniscus, which is an edge of a plasma sheath shielding an applied electric field for the beam extraction, and an electrostatic lens formed in the vicinity of acceleration holes. We have conducted the experiments focusing on identification of a key plasma parameter for the meniscus formation and on characterization of the beam focusing by the electrostatic lens.

It has been observed that the meniscus shape is optimized by tuning the bias voltage ($V_{bias}$) with fixed extraction condition in the negative ion source in the Large Helical Device (LHD) [a]. This suggests that the dominant plasma parameter for the meniscus formation could be identified in this experiment series. However, correlation between the plasma parameters and the beam optics was not examined in the study due to the limited diagnostic tools for source plasmas. Then, simultaneous measurements of source plasmas and the negative ion beam has been carried out in an R&D negative source for LHD-NBI, which is schematically illustrated in Fig. 1.

The meniscus shape was varied by changing the discharge power with fixed extraction and acceleration voltages ($V_{ext}$ and $V_{acc}$) at different $V_{bias}$, and the beamlet width was estimated from the beamlet footprint formed on a beam target. As a result, it was found that the 1/e-folding beamlet width ($w_{1/e}$) is optimized at different electron to negative ion density ratios depending on the Vbias while the $w_{1/e}$ reaches the same minimum at any $V_{bias}$. On the other hand, the w1/e changed along the same curve with respect to the negative ion density ($n_{H–}$) for different $V_{bias}$ as shown in Fig. 2. 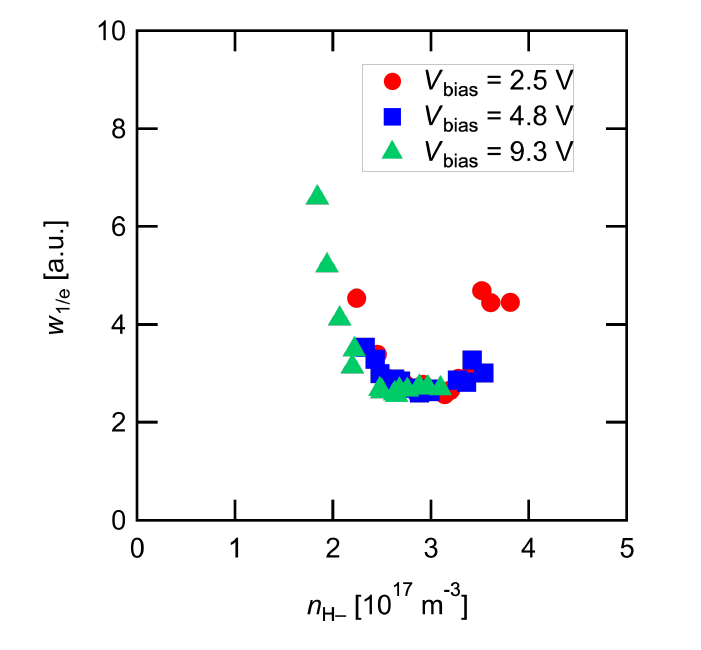 The phase space structure was measured by means of a pepper-pot-type phase space analyzer, which consists of a collimator with pinhole arrays and a detector as shown in Fig. 3, in order to investigate response of the beam optics to the electrostatic lens in the acceleration gap. 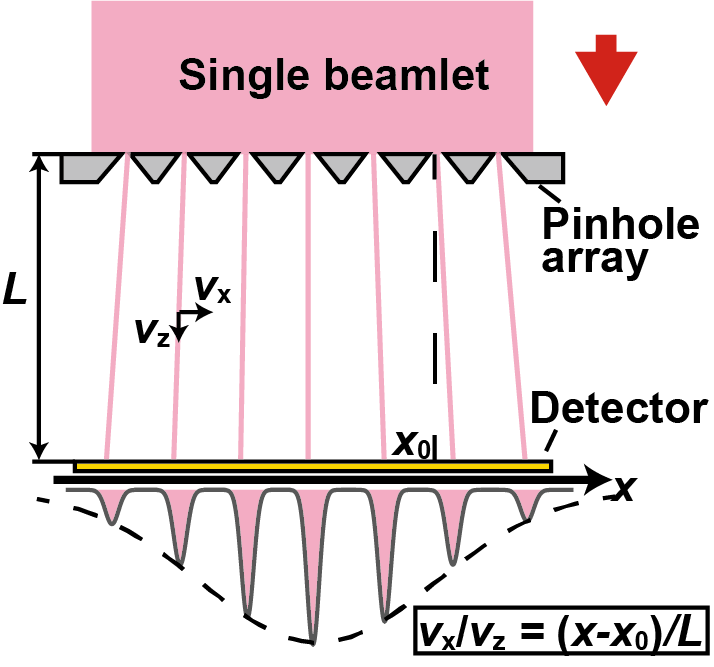 Fraction of the single beamlet passes through the pinhole and is distributed on the detector according to the velocity spread perpendicular to the beam direction. Then, the phase space structure is estimated from the intensity profile. The curve passing through the peaks corresponds to the beamlet profile in the real space. The intensity profile of the beamlet fragments showed a complicated structure in this experiment, and was reproduced by superposition of three Gaussian profiles. This means that the single beamlet is decomposed by three Gaussian components, and the phase space is occupied by three ellipses as shown in Fig. 4.

We also found that the beam axis of each components moves along the extended elliptic axis depending on the voltage ratio ($V_{acc}$/$V_{ext}$) and this characterizes the beam focusing by the electrostatic lens. In addition, it was observed that the width of each beam components becomes minimum at the same $V_{acc}$/$V_{ext}$ where three beam axes coincide. This suggests that optimizing two different elements simultaneously is essential to realize the low divergence beam. It has been conventionally understood that the beamlet consists of a single Gaussian component only, and the accelerator has been developed on the assumption that the beamlet width is shrunk or expanded at each electrostatic lens depending on types of the lens (conversing or diverging lens). However, the results explained herein give a new insight, which is completely different from the conventional description, into the property of the beamlet focusing by the electrostatic lens.