Comprehensive toroidal modeling using 3D MHD codes MARS-F and MARS-Q offers useful physics insights and quantitative understanding into ITER ELM control by RMP. Type-I edge localized modes (ELMs) release large bursts of heat and particle flux to the plasma facing components in tokamaks, potentially causing significant material erosion in future devices such as ITER$^1$. ELM mitigation or suppression has been routinely achieved in present-day machines by utilizing three-dimensional (3-D) resonant magnetic perturbation (RMP) fields$^2$. Although understanding of RMP ELM control physics is still incomplete, significant progress has been made during recent years, allowing optimization of the ELM control coil configuration for ITER. In particular, linear plasma response theory offers physics insights into ELM control by RMP.
Below we provide important background based on previous work. One of the key findings from toroidal modeling of the ELM control experiments in present-day devices is the realization that the edge-peeling plasma response plays an important role in ELM control [3], both for mitigation and suppression. The plasma X-point displacement, caused by the applied vacuum RMP field and computed by MHD codes such as MARS-F, correlates with the edge-peeling response and can thus be used as a figure of merit measuring the degree of ELM control$^3$.
Toroidal modeling also reveals that the computed large plasma X-point displacement is well correlated to the magnetic island size near the plasma edge, as predicted by the linear resistive MHD model. Examples of such correlation are shown in Fig. 1, for various ELM control experiments on different devices. Such a correlation also supports the important role played by magnetic islands near the plasma edge in ELM mitigation and suppression. Because of this correlation, either of the aforementioned figures of merit can be applied for finding the optimal ELM control coil configuration, for both present-day devices as well as for ITER, yielding the same quantitative prediction.
Based on the above figures of merit, which have been validated against multi-machine ELM control experiments, ELM control coil optimization has been carried out for a series of 6 ITER scenarios from the IMAS database, ranging from the hydrogen plasma for the initial pre-fusion power operation$^4$ to the final fusion power operations with DT fuels$^5$. MARS-F modeling finds that the edge safety factor ($q_{95}$) and the pedestal plasma toroidal flow are two key factors affecting the linear plasma response, and consequently the ELM control in various ITER scenarios. The pedestal flow speed can significantly affect the amplitude of the plasma response (measured e.g. in terms of the plasma surface displacement) but generally does not affect the optimal coil phasing among three rows of the ELM control coils in ITER. The optimal coil phasing, however, directly depends on the edge safety factor. Different ITER scenarios with similar q95, e.g. with the plasma current and toroidal field being proportionally scanned, share the same optimal ELM control coil configuration. This robust feature is beneficial for the ITER exploration. On the other hand, ITER scenarios with different $q_{95}$ generally require re-tuning of the coil phasing.
As an example, Fig. 2 shows the computed plasma X-point displacement for the 15MA/5.3T baseline scenario at Q=10 ($q_{95}$ ~ 3.1), while scanning the coil phasing in the 2-D parameter space, i.e. the relative coil current phase between the upper row and middle row, and that between the lower row and middle row, of the ITER ELM control coil system. The optimal coil phasing is found to be (200o, 140o) for this ITER scenario, assuming the n=3 field configuration. Furthermore, plasma response computations for ITER also reveal that the large sized equatorial row coils produce large plasma response and toroidal torque in both core and edge, leading to a strong core-edge coupling effect. The two off-middle rows of coils are essential for decoupling the plasma core-edge response. 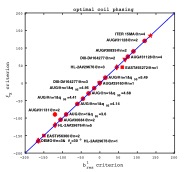 Finally, a quasi-linear initial value simulation code, MARS-Q, has been developed and validated against experiments in MAST and DIII-D. The code is capable of simulating the plasma momentum and particle transport due to 3-D fields. Applying MARS-Q to the ITER Q=10 DT plasma does not find substantial plasma core flow damping nor density pumpout, assuming the above optimal coil phasing for ELM control at 90 kAt coil current. This result indicates that mode locking will most likely not be an issue during ELM control in ITER, by applying higher-$n$ (e.g. $n$=3) RMP fields. The modeling results for ITER will be stored in the IMAS database. 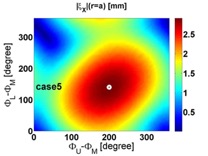 In summary, this work reports the following new results. The $q_{95}$ value and the pedestal plasma toroidal flow are identified as the key factors affecting plasma response and thus ELM control in various ITER scenarios. The optimal n=3 coil phasing of (200$^{\rm o}$,140$^{\rm o}$) is robust for four ITER scenarios with similar $q_{95}$~3.1, but not for the 7.5MA/5.3T/$q_{95}$=6.2 plasma. The large size equatorial row coils in ITER produce a strong core-edge coupling, which is mitigated by the off-midplane rows. One key recommendation is that three rows are essential to ensure flexibility and robustness of ELM control in ITER. Quasi-linear initial value simulations show that the n=3 RMP field, optimized for ELM control, does not result in substantial plasma core flow damping in ITER Q=10 DT scenario. The modeling results, to be stored in ITER IMAS database, have direct impact on the ELM control planning in various ITER scenarios.