It is likely that fusion reactors will benefit from, indeed perhaps require, ‘advanced’ divertor geometries to improve the power handling of the divertor and the control of detachment. One candidate is the Super-X divertor, in which the target major radius, $R_t$, is increased from the conventional value, which is similar to the X-point value $R_x$, to larger major radius where the total magnetic field is lower. This increases the ‘total flux expansion’ $B_x/B_t\approx R_t/R_x>1$ and, as the total field decreases along the field line at larger $R$, the parallel heat flux drops due to the increase in flux tube area. The Super-X geometry also increases the connection length from outer mid-plane to target as well as allowing for improved neutral closure. Here, we summarise our recent interpretive and predictive SOLPS-ITER modelling of Super-X divertors on TCV and MAST-U. This modelling addresses some of the key issues which will determine the efficacy of the Super-X, including detachment onset, detachment window, detachment stability and control. It also includes more general detachment analysis that is likely to be relevant to conventional divertors as well.

Considering first detachment onset, SOLPS-5.0 simulations in simplified rectangular ‘box’ divertor geometries have shown that the upstream density at which target flux rollover occurs is inversely proportional to the total flux expansion at the target [1] (see figure). This is in line with simplified models [2], as well as predictive modelling of MAST-U, suggesting a strong benefit of total flux expansion so long as the neutral pathways are kept fixed. In contrast, however, recent experiments at TCV show a negligible effect of total flux expansion on detachment onset [3]. We have clarified this apparent contradiction via SOLPS-ITER modelling of the specific TCV plasmas and geometry. Our analysis concludes that there is a reduced divertor neutral confinement for the total flux-expanded configuration compared to the conventional configuration on TCV, which cancels out the effect of increased target major radius [4]; an artificial combination of divertor baffling and target tilting in these simulations helps to equalise the neutral confinement and reinstate the total flux expansion effect. These results indicate that both baffling and total flux expansion reduce the detachment onset density threshold, so should ideally be combined in a divertor design. 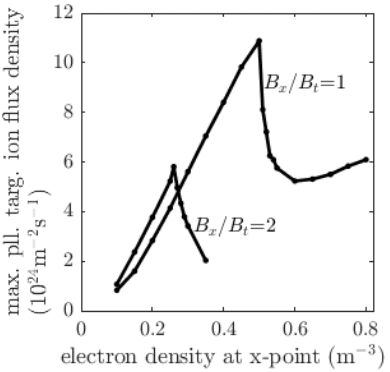 Predictive modelling of MAST-U has compared detachment obtained via impurity seeding to detachment via D$_2$ fuelling. A significant recombination particle sink was only observed in the D$_2$ fuelling case and the detached poloidal density profiles were significantly different in the two cases (density was strongly peaked at the target in the fuelled case but not in the seeded case). These qualitatively different predicted behaviours are strongly linked to ion-molecule elastic collisions; the fuelled detached state becomes similar to the seeded case when ion-molecule elastic collisions are removed from the simulations. The validity of these predictions can be tested when the machine starts.

Regarding the detachment window and stability, full geometry predictive MAST-Upgrade simulations of detached nitrogen-seeded plasmas in the Super-X configuration have been carried out using SOLPS-ITER. These show that the rate of movement of the thermal front with seeding slows towards the X-point, with a minimum ‘speed’ at the location of maximum parallel gradient in magnetic field strength. Although a causal relationship remains unconfirmed, this indicates that a new degree of passive front controllability might be obtained in long-legged divertors via strong local changes in the divertor magnetic field (in this case due to a local outward ‘kink’ in the flux surfaces corresponding to a fast drop in B). To assess the quantitative agreement with the analytical model presented in [2] for the thermal front position with changing control parameter (e.g. upstream density), we have extended that model to account for arbitrary magnetic field strength profiles along the field line. The resulting comparison shows good quantitative agreement between SOLPS-ITER and the extended analytic model [5].

In order to gain further understanding of detachment stability and control, a 1D fluid modelling code for the SOL, SD1D, has been developed and employed to study the basic detachment physics in total flux-expanded divertors, where $B_x/B_t$ = 2 was set as an input [6]. It was found that the precise functional form of momentum and power loss on target temperature, $T_t$, determines whether a continuous (in $T_t$) set of divertor solutions exist or whether the plasma state ‘jumps’ from one equilibrium to another; exploring how divertor design affects those functional forms is an avenue for future research.

The modelling presented here demonstrates some powerful and attractive features of the Super-X design. In addition, many of the lessons learned are also applicable to general divertor design where a full Super-X divertor may not be feasible. These studies should be seen as part of a more general effort to optimise divertor design. Our aim is to have better divertor design tools with a better understanding of the impact and coupling between each design control parameter (e.g. baffling, total flux expansion, vertical vs horizontal target and seeding impurity). Validation of our models against future MAST-U plasmas will be crucial to establish confidence in our predictions for advanced divertor configurations on future machines.