Synthetic observations of modelled scrape-off layer (SOL) turbulence were compared to experimental beam emission spectroscopy (BES) measurements taken on ASDEX-Upgrade and EAST tokamaks and feasibility of similar studies are discussed on JET.
The behavior and dynamics of the plasma in the SOL contribute to the performance of a plasma discharge and mostly determines the plasma loads on the plasma-facing components. Transport in the SOL is governed by intermittent turbulent fluctuations forming filamentary structures that transport particles, momentum and heat, both parallel and perpendicular to the field lines. The present contribution aims to analyze and compare the dynamics of the measured and the modelled SOL filaments 1.
BES is a non-perturbative, localized active plasma diagnostic system that features temporal and spatial resolution in the range of MHz and centimeters, respectively, suitable for the study of SOL turbulence. An atomic beam is injected at high velocity into the plasma that spontaneously emits photons as a result of beam atom collisions with plasma particles. An independent observation system collects the light emission of the beam for the inference of plasma density and related fluctuations.
A turbulence workflow, developed within the EUROfusion Integrated Modelling framework was used to generate SOL turbulence and subsequent synthetic fluctuation BES signals. Time dependent fluctuating density and temperature fields are passed to BES synthetic diagnostic via integrated data structures 2. These fluctuations are provided by 2D fluid code, HESEL, where the filaments are generated by interchange dynamics in the SOL as seen in Figure 1 A. 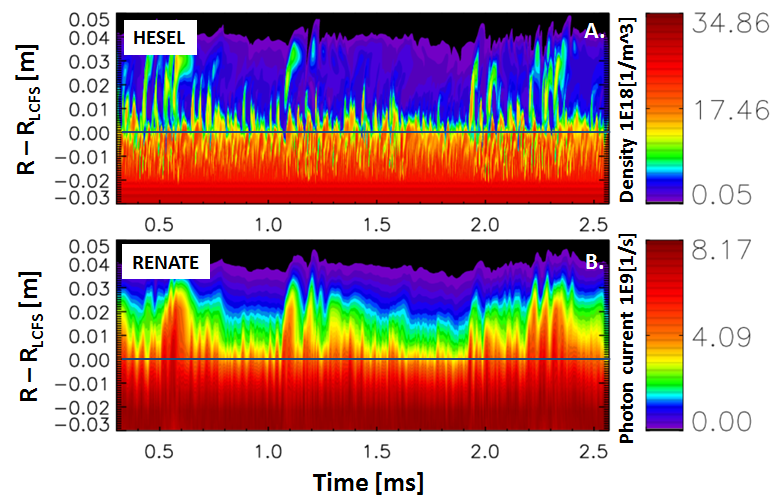 Flux tube expansion of turbulent structures within the beam geometry allows for a 3D approximation of modelled SOL filaments 3. RENATE is a fluctuation BES synthetic diagnostic [4], featuring 3D beam and 3D observation geometry, as well as accounting for the underlying magnetic geometry, thereby incorporating all relevant spatial artefacts of the diagnostic. [Figure 1]B shows the time-evolution of the radial profile of the BES signal EAST for modelled L-mode discharge #74788.
The chosen observation geometries allow for the study of various aspects of SOL filament dynamics on multiple machines. The AUG BES observation allows for a radial velocity measurements of filaments [5]. The EAST BES measurements have a 2D resolution allowing for vertical velocity measurements as well [6]. JET has a 1D BES geometry allowing for a dominantly vertical observation of filaments [7]. Statistical analysis of synthetic and experimental signals on L-mode plasmas measured on all three devices have shown a good agreement in the power spectrum up to 20 - 40 kHz, which is the expected range of SOL turbulence. Probability density functions of individual channels were fitted with Gamma functions and the skewness, S and kurtosis, K were derived. 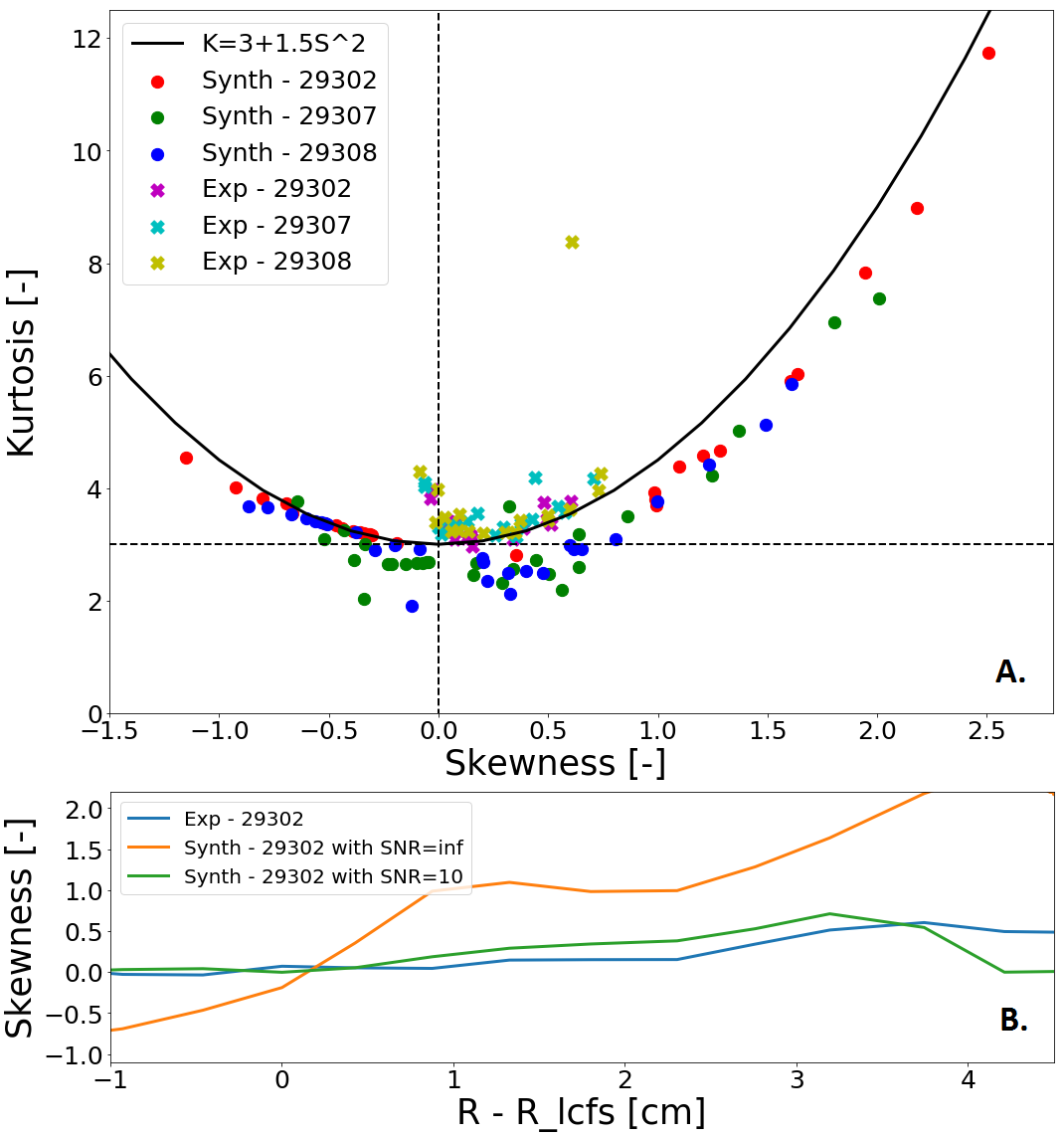 Figure 2 A shows the skewness and kurtosis values of experimental BES signals for L-mode portion of AUG discharges #29302, #29307 and #29308 as well as those of corresponding synthetic BES channels. Both sets of signals are observed to follow the variation K=3/2 S^2, see e.g. 2. [Figure 2]B displays the radial variations of the skewness and an increase towards the far SOL in the synthetic and measured signal alike. The synthetic signal was regarded as the expected value of the light measurement. BES specific noise was added to the synthetic signals having the same signals to noise ratio as in the corresponding experimental measurement improving the agreement between measurement and modelling. Individual filaments have been observed in both signals on AUG and EAST. Based on time delay estimate (TDE) measurements an agreement was found in radial propagation velocity of filaments in both experimental and synthetic signals on AUG and EAST alike. TDE measurements have shown a discrepancy in vertical velocity on EAST.
In the present contribution, through event identification, the propagation of individual filaments was observed. Features of filaments were identified such as relative peak amplitude, waiting time, integral amplitude and velocity.

Figure 3 A and B show the relative peak amplitude of filaments and waiting time distribution functions, respectively for experimental measurements on a BES channel in the near SOL, taken during discharge AUG #29307. Both can be described by exponential functions but with a power law like behavior for large events. Similar features were compared to corresponding synthetic BES measurements. An investigation was carried out comparing filament distribution functions of measured experimental and synthetic BES signals over a wide range of main plasma parameters such as electron density, toroidal field strength and safety factor.
The turbulence workflow used for the comparison of experimental BES signals with modelled BES signals was found to be a powerful tool analyzing the dynamics in the SOL.