In the Large Helical Device (LHD), deuterium (D) plasma experiment has been conducted since 2017. This is the first opportunity in stellarator / heliotron devices to reveal the transport of tritium (T) generated by DD fusion reactions. Dedicated analyses of the remaining T in the LHD vacuum vessel have been conducted, and results of the analyses suggest that T remains densely in divertor tiles and sparsely in the first wall. Furthermore, an asymmetry was observed in remaining amounts of T in divertor tiles located at symmetric positions. This asymmetric distribution is consistent with the distribution of high-energy triton loss positions on the vacuum vessel calculated by a Lorentz orbit following code (LORBIT) [1]. A depth profile of remaining T in a baffle part of divertor tile, on which no divertor plasma struck, shows that the peak of the profile locates several micrometers from the surface, which is much deeper than the range of thermalized T. These results suggest the origin of the remaining T in divertor is mainly high energy triton.

Figure 1 shows the top view of four divertor tile arrays in the helical divertor in a half part of LHD. Yellow dots in Fig. 1 are lost positions of high energy triton calculated by using LORBIT code for the standard operational magnetic configuration with the counter-clockwise (CCW) toroidal magnetic field ($B_{t}$) direction. It is clearly shown in Fig. 1 that high energy tritons are lost to divertor region asymmetrically. In this case, the lost positions are only at red colored tile arrays. In the case of the clockwise (CW) $B_{t}$ case which is not shown here, lost positions are only at blue colored tile arrays. B × grad B drift dominates the orbit loss of high energy triton, and thus the asymmetry depends on the $B_{t}$ direction. 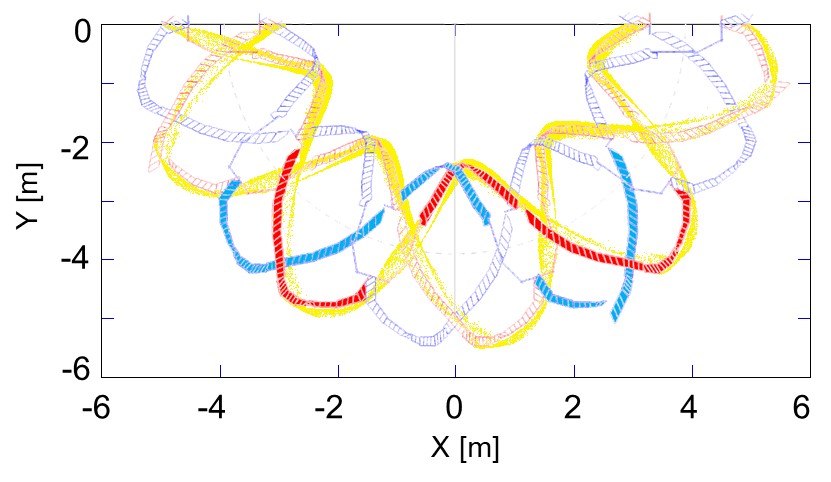 Remaining T in divertor tiles made of graphite was analyzed by using the tritium imaging plate technique (TIPT) [2], which can measure the amount of remaining T within a depth shallower than the escaping depth of $\beta$-rays from T decay (~ 1 $\mu$m for graphite) as the photo-stimulated luminescence (PSL) intensity. Figure 2 shows two divertor tile arrays, which are shown as arrays filled with blue and red in Fig. 1, and positions of retrieved divertor tiles to analyze. 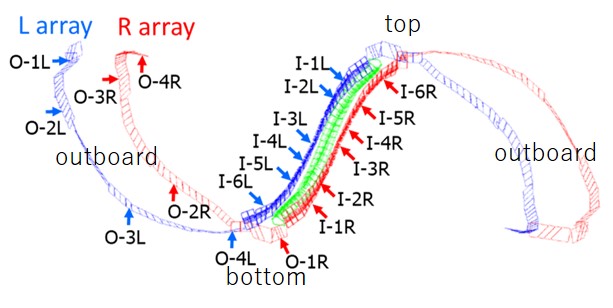 Figures 3(a) - (d) show areal and exposure-time averaged PSL intensities on divertor tiles. These figures clearly indicate that amounts of remaining T near surface is asymmetric, and larger amounts of remaining T are on tiles in R array rather than in L array. In the D experimental campaign in 2017, experimental dates with CCW and with CW $B_{t}$ were 54 days and 12 days, respectively. Therefore, the asymmetry shown in Figs. 3 (a)-(d) is consistent with the above mentioned asymmetry in the high energy triton loss. Relatively large PSL intensities were observed on baffle part tiles at the inboard-side divertor shown as red bars in Fig. 3(b), on which no divertor strike point comes, and the asymmetry is most evident in the baffle part tiles between L (blue bar) and R arrays in Figs. 3(a) and (b). In the cases of divertor tiles struck by divertor plasma (light blue and orange bars), temperature rises and isotope exchanges can cause the smaller retention of T and the asymmetry. 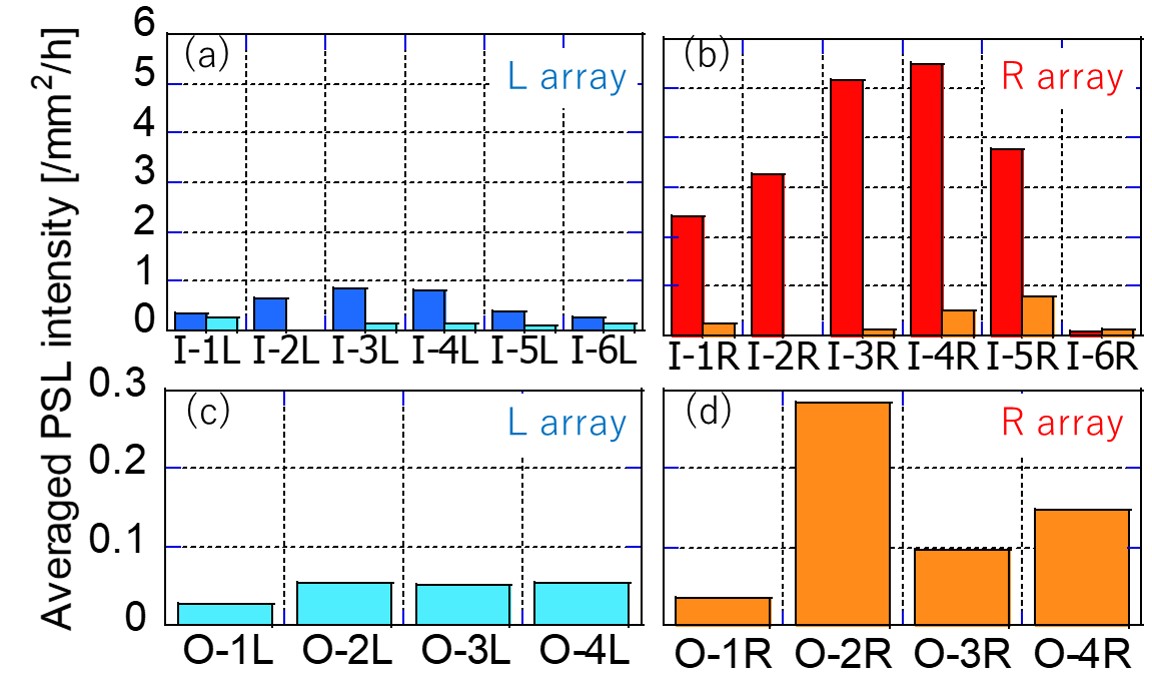 Figure 4 shows a depth profile of the PSL intensity in a baffle part tile (I-3R), which was obtained by using a new method, which uses a sputtering treatment and TIPT. For the short escaping depth of $\beta$-rays from T decay, the profile of remaining T is similar to this profile. Because the depth of the peak of the profile is much deeper than the normal incident hydrogen (H) with energy of 100 keV, the origin of remaining T is considered to be high energy triton with various incident angles. 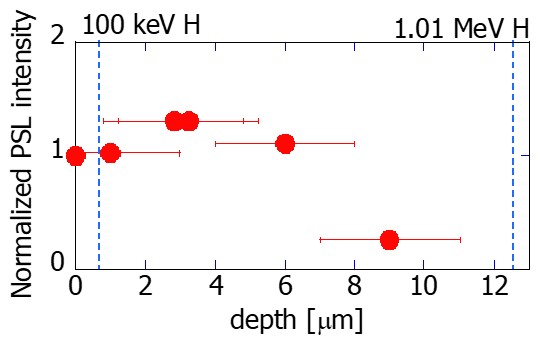