Isotope effect on energy confinement time and thermal transport has been investigated for L-mode plasmas in LHD. Detailed and comprehensive assessment in stellarator-heliotron plasmas has progressed since the last IAEA-FEC [1]. Plasmas of hydrogen(H), deuterium(D) and their mixture including helium (He) have exhibited no significant dependence on the isotope mass $M$ in thermal energy confinement time. This is not consistent with simple gyro-Bohm model. Comparison of thermal diffusivity for dimensionally similar H and D plasmas in terms of gyro radius $\rho_*$, collisionality $\nu_*$ and thermal pressure $\beta$ has clearly shown robust confinement improvement in D to compensate for unfavorable mass dependence predicted by the gyro-Bohm model. Also, the transient electron heat transport does not show a substantial difference in H, D and their mixture plasmas. These observations have shown distinction to tokamaks and rouse challenge to common physics picture of isotope effect.

It has been recognized that thermal transport in toroidal plasma is dominated by the turbulence with the characteristic scale of ion gyro-radius. This model is referred to as gyro-Bohm. However, while plasma of heavier hydrogenic isotope would have larger thermal diffusivity according to this gyro-Bohm model ($\chi \propto \rho_* \propto M^{1/2}$), major experimental observations in tokamak have shown better confinement in D plasma than in H plasma. This isotope effect remains a long-standing mystery in fusion plasma research. Clarification of the origin of the isotope effect is a key issue to project a DT burning.

Figure 1 shows the comparison of thermal energy confinement time in the experiment with the scaling expression derived from statistical regression analysis; $\tau_{E,th}^{scl} \propto M^{-0.02} B^{0.89} \bar{n}_e^{0.75}P_{abs}^{-0.90}$. Thermal stored energy has been evaluated by profile documentation and dilution of ions due to major impurities of helium and carbon is also taken into account. Here no significant dependence on $M$ is identified and this expression is inconsistent with the gyro-Bohm model suggesting $M^{-0.5}$ dependence. When the energy confinement time normalized by ion gyro-frequency $\Omega_i$ is assumed to be expressed by 4 major dimensionless parameters, this scaling expression is rephrased into the dimensionless expression of $\tau_{E,th}^{scl}\Omega_{i} \propto M^{0.98} \rho_*^{-2.99} \nu_*^{0.21} \beta^{-0.35}$. It should be noted that the gyro-Bohm nature is described as $\tau_{E}\Omega_i \propto M^{0} \rho_*^{-3}$. Therefore, additional clear mass dependence is identified here, which compensates unfavorable negative dependence on mass in the gyro-Bohm model. At the same time, it should be emphasized that gyro-Bohm dependence of $\rho_*^{-3}$ persists. 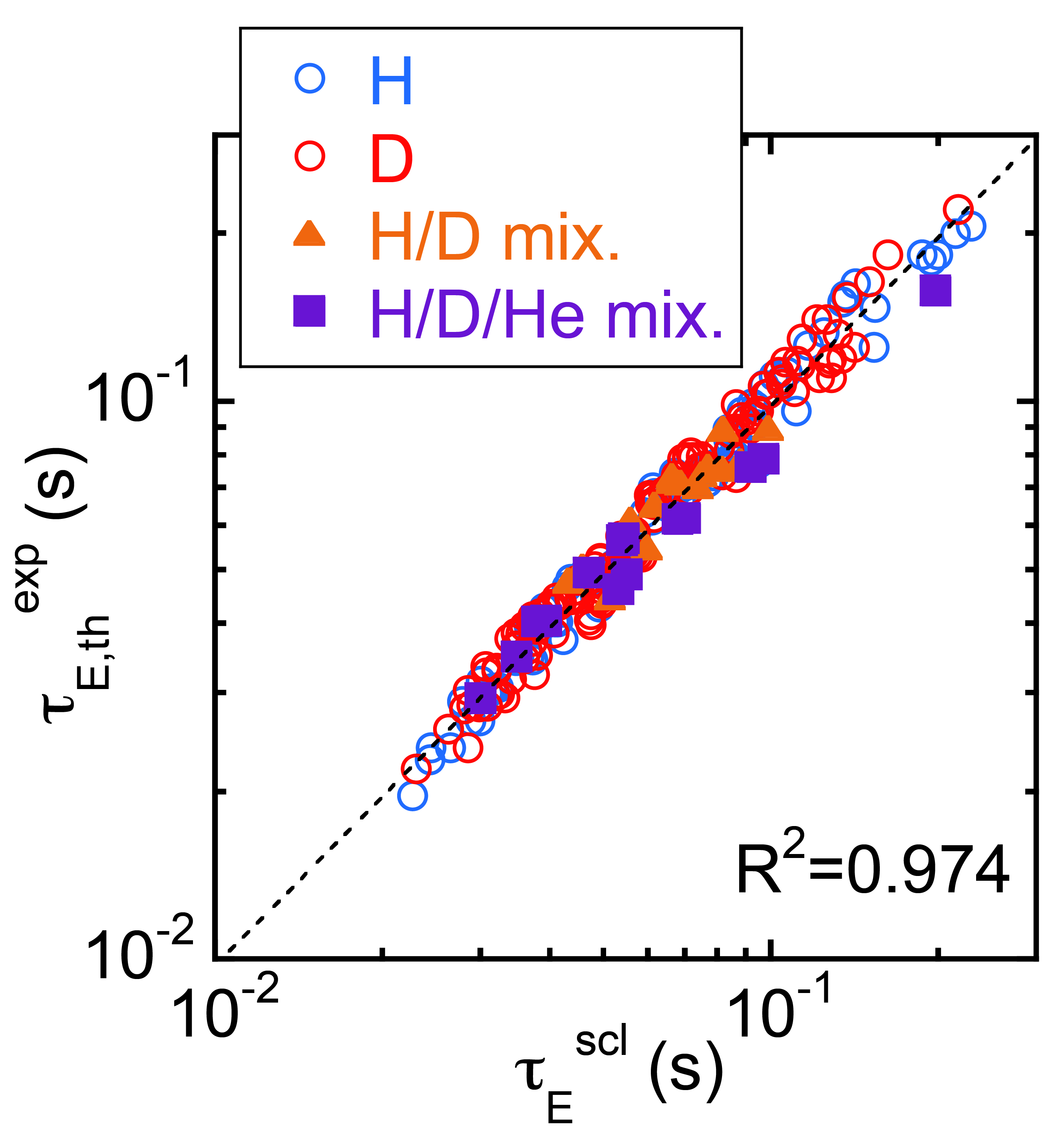 Then thermal diffusivity in dimensionally similar plasmas has been compared in order to clarify the peculiarity of isotope effect seen in the energy confinement time. Since the three operational parameters $B$, $\bar{n}_e$, and $P_{abs}$ are controllable in the experiment, dimensionally identical condition in terms of $\rho_*$, $\nu_*$, and $\beta$ can be fulfilled for plasmas with different $M$. With using the confinement improvement factor of $\alpha=\tau_E^D / \tau_E^H$, which is 1/$\sqrt{2}$ if gyro-Bohm, the operational conditions for dimensionally similar H and D plasmas are given by the following relation, $B^{D}=2^{3/4}B^{H}$, $\bar{n}_e^{D}/\bar{n}_e^{H}$ = 2, $P_{abs}^{D}=2^{3/4}\alpha^{-5/2}P_{abs}^{H}$ [2,3]. In results, dimensionally similar pairs have been obtained around $\alpha$=1 as predicted by the discussion about the energy confinement time. Since these pairs of H and D plasmas have the same $\rho_*$, $\nu_*$, and $\beta$, normalized thermal diffusivity $\chi/\Omega_i$ would be the same based upon whichever neoclassical, Bohm or gyro-Bohm transport plays an essential role. However, Fig. 2 (a) shows that $\chi_{e} /(S_{2/3} \Omega_i)$ is improved in D from H by a factor of around 2 over the surveyed range of $\nu_*$, which may implicate 1/$M$. Here it should be noted again that electron heating is dominant under the present condition. The ratio of ion thermal diffusivity shows a different trend. One important element in comparison of thermal transport in H and D plasma is difference in collisional electron-ion energy exchange [4]. Heat transfer between electrons to ions $P_{ei}$ is proportional to $n^{2}(T_{e}-T_{i})/(MT_e^{3/2}$). Since $T_e$>$T_i$ in plasmas studied here, it is expected that enhancement of $P_{ei}$ in H plasmas leads to the increase of ion heat flux. Figure 2(b) shows the ratio of the electron heat flux $q_e$ to the ion heat flux $q_i$ corresponding to the data plotted in Fig.2(a). While electron heat flux decreases with the increase of $\nu_*$ ($\propto n/T^2$), this trend is less pronounced in H plasmas than in D plasmas. This is because the density is set at the double for D plasma in this comparison and the effect of mass on electron-ion energy transfer is cancelled out. Electron loss channel stays dominant, in particular in H plasmas, and ion loss channel does not become dominant. Therefore, improvement of electron thermal diffusivity in D shown in Fig.2(a) is consistent with the significant mass dependence ($\propto M^{0.98}$) seen in the non-dimensional expression of the energy confinement time. In this regard, global ($\tau_E$) and local characteristics ($\chi$) matches each other in L-mode plasmas on LHD. 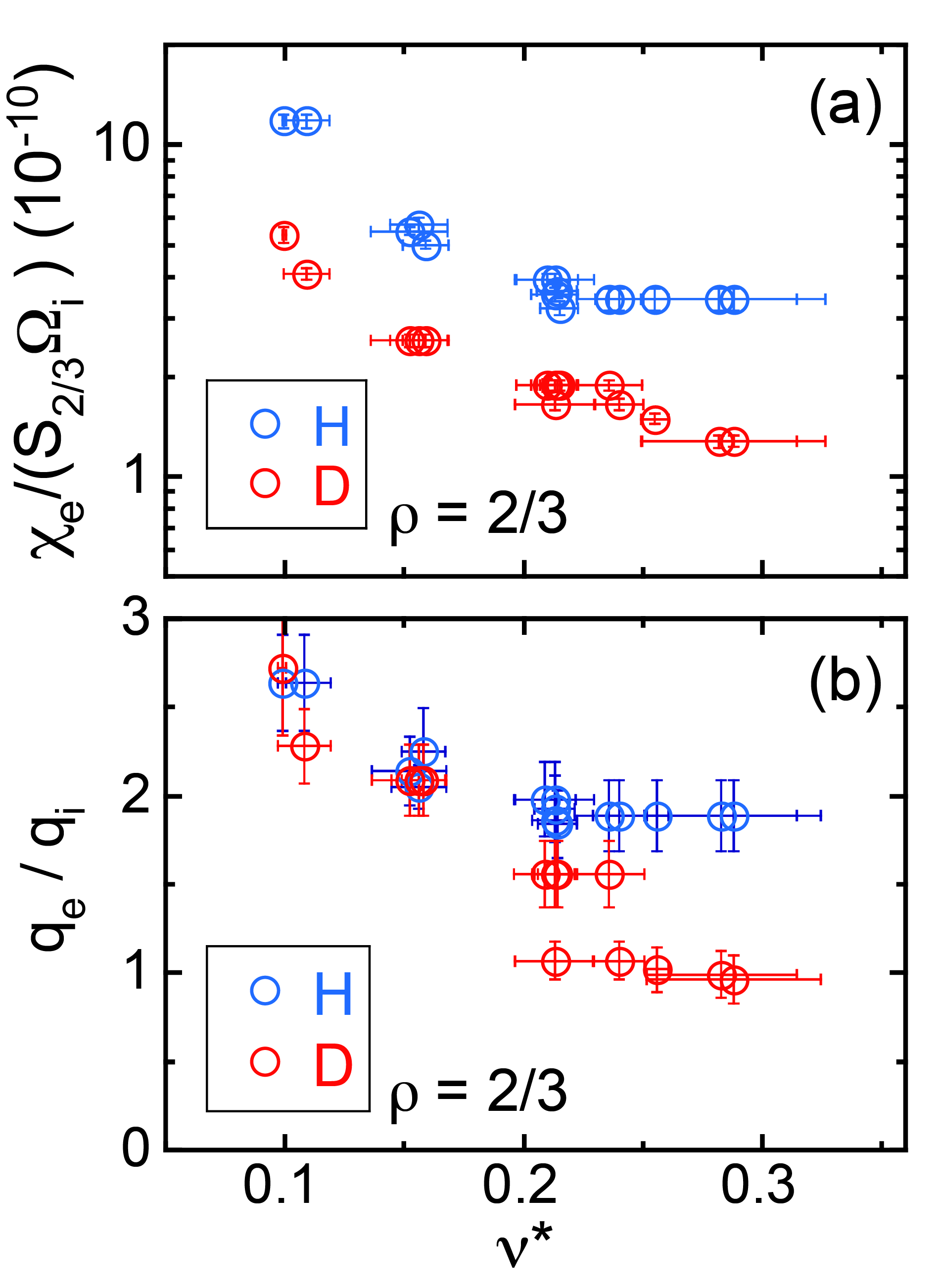 In addition, emergence of a loop-type bifurcation during the modulated ECH (MECH) in the flux-gradient relation has been attracting interests, which corresponds to rapid and nonlocal responses of turbulence intensity and transport to heating power [5,6]. The transient response to MECH has been investigated for L-mode plasmas of H, D, and their mixture. While the trajectories on the flux-gradient diagram (see Fig.3) leap when the MECH is turned on and off, their hysteresis widths are the same for plasmas of H, D and their mixture. This observation is consistent with the fact that there is no significant mass dependence of energy confinement and thermal diffusivity. 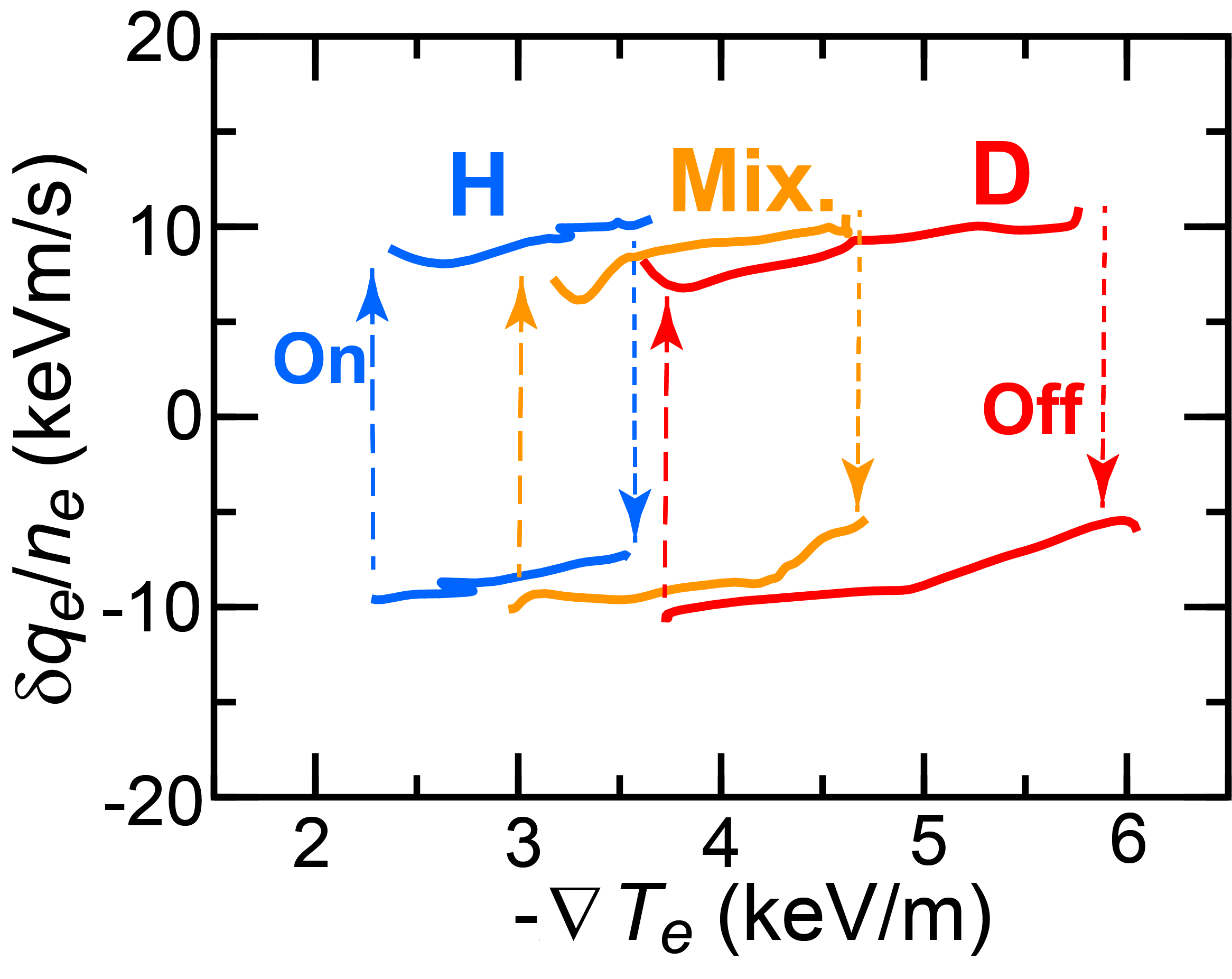