Plasmas flows have been extensively studied in magnetic confinement fusion and found to be critical to edge transport barriers and global MHD stability. In non-symmetric systems, the flow-defining radial electric field and net parallel rotation are expected to be set by neoclassical mechanisms and are related to the radial particle transport and parallel bootstrap current. In this respect, the experimental verification of the flow predictions provide a fundamental sanity check for the accuracy of the neoclassical description of transport processes in a device, Wendelstein 7-X, which was optimised on the basis of that description. Generally speaking, the neoclassical ambipolar electric field is known to provide a good qualitative description of the measured values in stellarator devices. Nevertheless, previous validation efforts have shown measurable quantitative deviations (Dinklage et al. 2013) and accounts of 'spontaneous toroidal flow' have been published in the scientific literature (Nagaoka et al. 2013).

In this contribution we present a first comparison of fully-stripped carbon flows with neoclassical expectations obtained by the inversion of the multi-chord charge exchange recombination spectroscopy (CXRS) measurements (Ford et al. 2020) (see figure 1). The intricate magnetic configuration of the W7-X device requires a careful treatment of the flow geometry, including perperpendicular, Pfirsch-Schlütter and net parallel flow components for the interpretation of the velocity measurements and the inversion of the flow-defining flux surface quantities; namely the radial electric field ($E_r$) and the net parallel flow ($\langle V_\|B\rangle$). Additionally, the beam energy and main ion temperature in the device require to correct the measurements for cross-section effects. 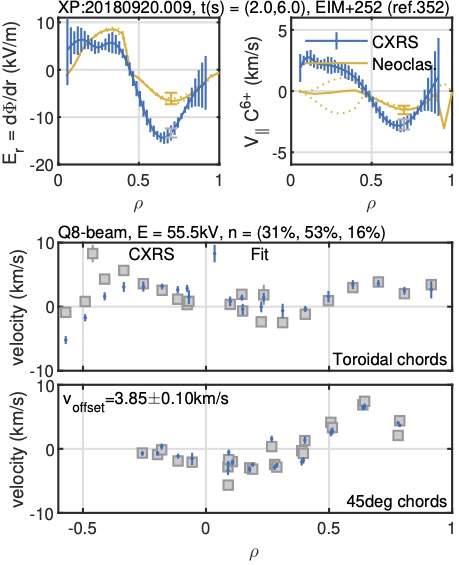 As the representative case shown in figure 1 illustrates, both the experimental $E_r$ and $\langle{V_\|B\rangle}$ profiles agree in sign and order of magnitude with the neoclassical expectations. Furthermore, the reduction of the $E_r>0$ electron root feature with increasing density is shown to be captured by the measurements (not shown in the figure). Nevertheless, some differences with respect to the neoclassical profiles are systematically observed to be above the estimated errors. Most noticeably, the $E_r$ measured at around $70\%$ of the minor plasma radius is up to $2\times$ more negative than calculated, whereas a finite $\sim 2$km/s net parallel rotation is observed at the center, where simulations would predict no rotation.

We will present a systematic analysis of these flow deviations to establish the nature (physical or instrumental) of the discrepancies. Namely: (1) atomic-physics corrections will be further sophisticated to include the effects of the excited neutral beam and halo populations, (2) the possible effect of NBI momentum input and fast ion radial currents in the $E_r$ and parallel rotation deviations will be quantified and (3) parametric dependencies of the deviations will be assessed. Additionally, the radial electric field obtained from CXRS will be compared with reflectometry and X-ray imaging measurements. With this integral approach we aim to establish the possibility that the observations reflect the existence of substantial anomalous radial current and/or parallel momentum fluxes in W7-X.