The suppression of the energetic particle (EP) driven mode is essential for the realization of the fusion reactor. Modification of the local plasma parameters, based on the stability analysis using FAR3D, successfully suppresses the EP driven interchange mode observed in the Large Helical Device (LHD). The achieved temperature is thereby improved significantly. Control of the EP driven interchange mode by the RMP application is demonstrated as well.
In the LHD, large amplitude bursting of the MHD activities (poloidal/toroidal mode number m/n =1/1) are often observed and they are identified as the helically-trapped energetic-particle (EP) driven resistive interchange mode (EIC) [A]. Since the confinement of the EPs is largely affected by the excitation of the EIC, it is urgent to control the EIC modes. Many types of control scheme for the EP driven MHD mode have been tested. Among them, modification of the safety factor profile is found to be quite effective and is performed in many Tokamak devices. However, since the poloidal magnetic field is generated by the external coils in helical devices, q-profile control is not necessarily efficient. As an alternative method, modification of the local plasma parameters is tested. Recently, unstable condition of the EIC mode are evaluated by the extended FAR3D code, which solves the reduced linear resistive MHD equations and the moment equations of the energetic ion density and parallel velocity included for the appropriate Landau closure [B]. The stability of the EIC is found to be closely related to the dumping effect of the Alfvén wave whose frequency is decreased with the increase of the electron density. EIC mode becomes, therefore, unstable only in the low-density regime and the density limit for the excitation is expected. This characteristic is qualitatively consistent with the experimental observation (Fig.1) that EICs do not appear in high density discharges. The EIC becomes more stable in the high-temperature regime as well. Two effects affect the EIC stability simultaneously. One is the change of the resistivity and the Alfvén gap structure (this effect is included in Fig. 1). The other is the reduction of the width of the MHD mode compared with the width of the bounce motion of the helically trapped EPs [D, E] (not included in Fig. 1). This change of the linear stability is qualitatively confirmed by the experimental observation. It is noted that at the stable / unstable boundary, the amplitude of the EIC becomes larger and the interval between EIC bursts longer since the pressure gradient of the EP needed to drive EIC is larger with more stable condition. It is consistent with the observation that the EIC burst is larger and less frequently observed with D beams where the EIC is more stable since the banana-like orbit of EP is wider with D beam [C, D].
When the plasma is additionally heated by the ECH and the temperature at the iota = 1 rational surface increases, the amplitude and the interval of the EIC becomes larger. That observation implies EIC becomes more stable. When the electron temperature is large enough, the EIC is completely suppressed [4, 5]. Using this ECH injection technique, high performance plasma operation without excitation of the EIC is realized in the LHD [F].
As another way to control the EIC, RMP (m/n = 1/1) application is also performed. Experimentally, the threshold density where the EIC appears becomes smaller with RMP (Fig. 2). Operational space without excitation of the EIC (non-shaded region in Fig. 2) is thereby significantly extended. Though the detailed mechanism of this suppression has not been clarified, it was found that the interchange mode is quite sensitive to the RMP field and that m/n = 1/1 mode disappears completely with the formation of the magnetic island [G]. Magnetic fluctuations having the frequency which can resonant with the precession motion of the EP always appear before the excitation of the EIC bursts. The amplitude of these fluctuations becomes smaller when the RMP field is applied. The RMP field penetrate the plasma gradually with the increase of the RMP coil current and the magnetic island is clearly formed at -1920A case. Thus, the control of EIC with RMP might be realized via the suppression of the interchange mode of the bulk plasma.
When two types of the control method applied to simultaneously, both methods somehow cooperatively affect the stability of the EIC. In the experimental condition of the Fig. 3, the electron temperature at the mode rational surface increased up to about 1.6keV. Many EICs are excited in this experimental condition (Fig. 3, black line). When the RMP (-1000A) field additionally applied, the EIC is almost suppressed (red line) and the loss of the EPs shown by the decrease of the neutron emission rate (Fig. 3) is reduced as well, though the local plasma parameter, such as the electron temperature and the electron density do not change significantly with RMP application. ECH power needed for suppression of the EIC is therefore clearly reduced when the RMP field is applied. Adjustment of the usage of the two method might be important for optimization targeting the EIC-free high-performance discharges. 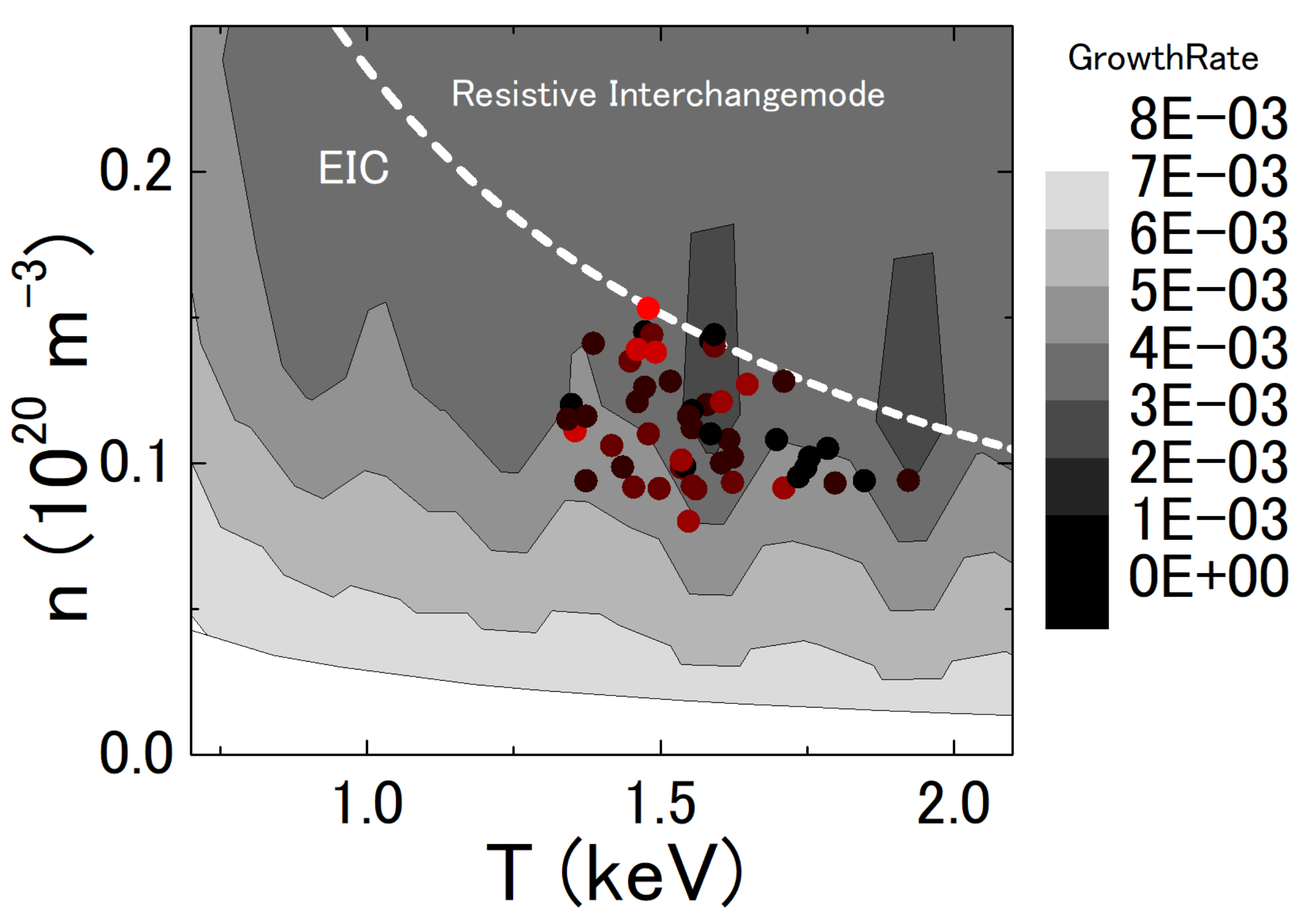 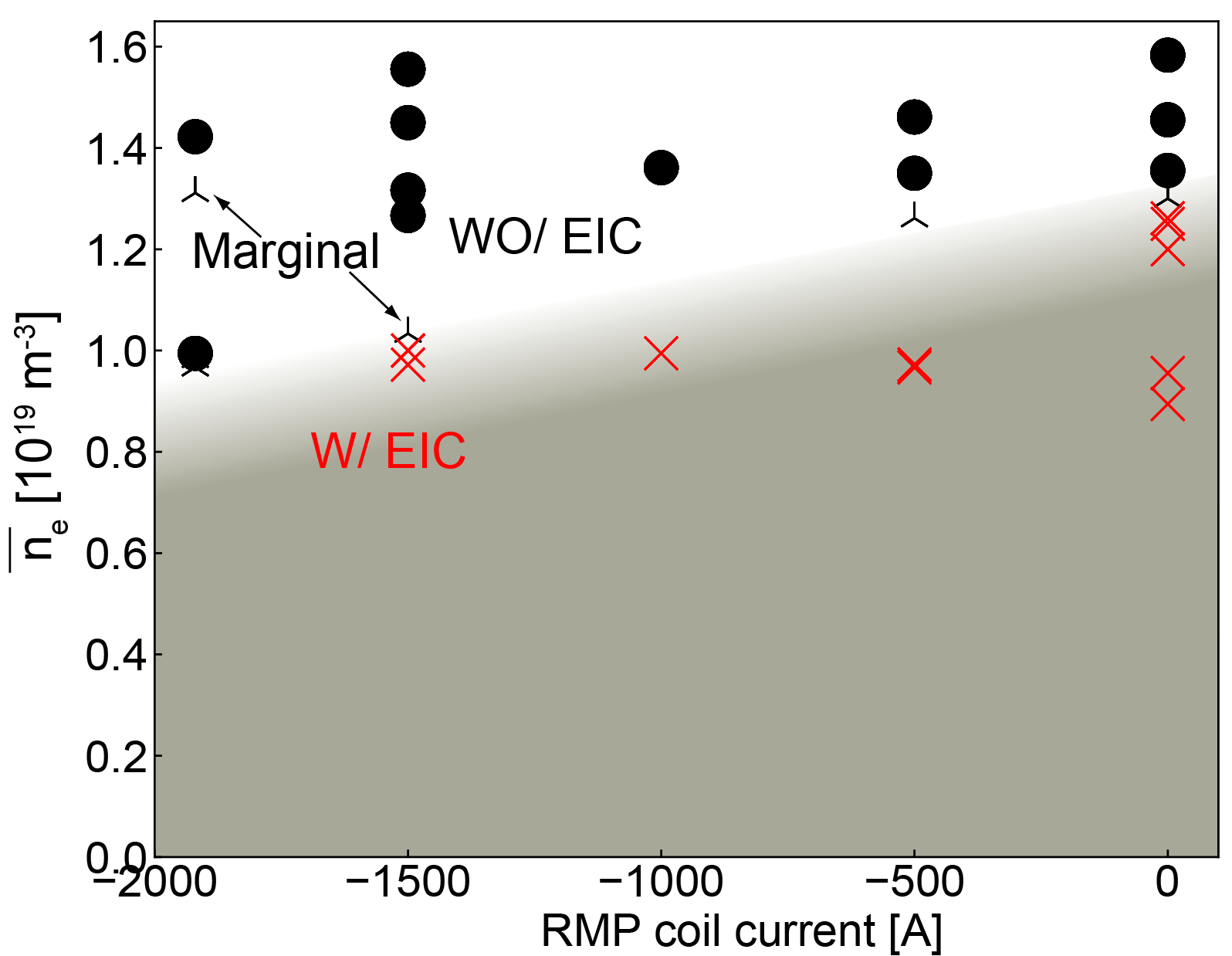