Understanding the scrape-off layer (SOL) physics in current fusion devices is essential to solve the exhaust problem for future reactors. The SOL configuration determines the intersections between the magnetic field lines and the device targets, opening up parallel transport channels for plasma heat and particles, which represent the most direct way for the exhaust to reach the divertor targets$^1$. The interplay of parallel and perpendicular transport, along with the distribution of sources, sets the SOL dynamics for both particles and energy, and consequently defines the effectiveness of a particular divertor configuration. Quantifying the parallel particles flows can therefore give insights into the overall SOL behavior$^2$, allowing to assess the predominant flow directions of the main plasma ions and impurities, and to have a direct representation of convective heat transport. Despite the fact that ion convection is commonly considered negligible in the description of the total divertor heat deposition$^1$, recent results at DIII-D$^3$ point out how the standard model based on electron conduction dominance is not always valid. For the W7-X stellarator, a more significant role of convection is to be expected, as the characteristic SOL temperature gradients are weaker and the connection lengths longer than typically in tokamaks. A quantitative investigation of the parallel particle flows is hence confirmed to be a pre-requisite to the understanding of the general SOL transport properties, even for heat deposition.
In order to perform successful studies of the SOL parallel transport, it is necessary to rely on dedicated edge diagnostics. A powerful tool that has emerged recently is the Coherence Imaging Spectroscopy (CIS) diagnostic, a camera-based interferometric system capable of measuring Doppler particle ﬂows associated with a selected visible emission line from the plasma$^{4, 5}$. In contrast to other flow diagnostics such as standard spectroscopy and Mach probes, CIS is distinguished by providing high time and flow velocity resolution, and high spatial coverage, all at the same time. Its 2D spatially resolved measurements led to the first direct detection of the complex 3D counter-streaming parallel flows structure in the SOL of W7-X$^6$ (see Fig.1). The W7-X application involves passive measurements of C$^{2+}$ impurities during hydrogen plasma experiments, with a view over the entire SOL. The C$^{2+}$ line-integrated measurements are restricted to the edge of the machine by the temperature dependence of the charged state photoemission coefficients, which peak in the range of 10-20 eV$^1$. This range coincides with the one necessary for hydrogen ionization. The vicinity to a source of H$^{+}$, combined with low temperature gradients from the radiation location to the divertor targets, leads to friction dominated scenarios$^7$ which imply that C$^{2+}$ impurities are a good proxy to examine the hydrogen ion parallel flow behavior in the SOL.
CIS measurements show a clear dependence on electron density variations. This is visible in Fig.2, in which C$^{2+}$ flow velocity and intensity (top) are plotted together with the peak heat load of one divertor module and the line integrated density (bottom). The plasma experiment can be divided into three domains: attached (before 6 s, Fig.1 (a)), transition to detachment (6-7.5 s, Fig.1 (b)), and detached (7.5-13 s, Fig.1 (c)). When the plasma is in the attached phase, $|v_{||}|$ increases with increasing density. This tendency reverses once the transition to detachment starts, as well as during the detached phase: $|v_{||}|$ drops even if the density keeps increasing, reaching values that are more than 4 times lower than in the attached case. The sensitivity of the velocity measured by CIS to density changes is also clear in the intervals 8.5-10.5 s and 11.5-13 s, which show variations not detectable in the peak heat load trace. The sharp decrease in $|v_{||}|$ is reliably correlated to the detachment transition and can therefore be used as a detachment signature. A velocity drop by at least a factor of 2 has been recorded for all the explored routes to detachment: density scans with main and divertor gas fueling systems (as shown in Fig.2 and Fig.3 respectively), and impurity seeding as in$^8$. The change in $|v_{||}|$ is always accompanied by an increase of the total C$^{2+}$ radiation (Fig.2-3 (top)), and a decrease of the heat flux to the divertor targets (Fig.2-3 (bottom)). The behavior shown here for a small amount of CIS lines of sight is shared by the rest of the measured data as well, confirming the tendency for the overall SOL.
These results suggest that particle parallel transport in the W7-X SOL robustly follows simple fluid dynamics, in which the ions stream towards the nearest target. With a direct measurement of the 2D distribution of a key SOL quantity (the ion fluid velocity), the CIS measurements allow a comprehensive test of this approximation. Although CIS has these powerful features, there are subtleties in the interpretation of the measurements, which require further work before a full quantitative understanding of the convective contribution to the divertor heat loads can be gained. 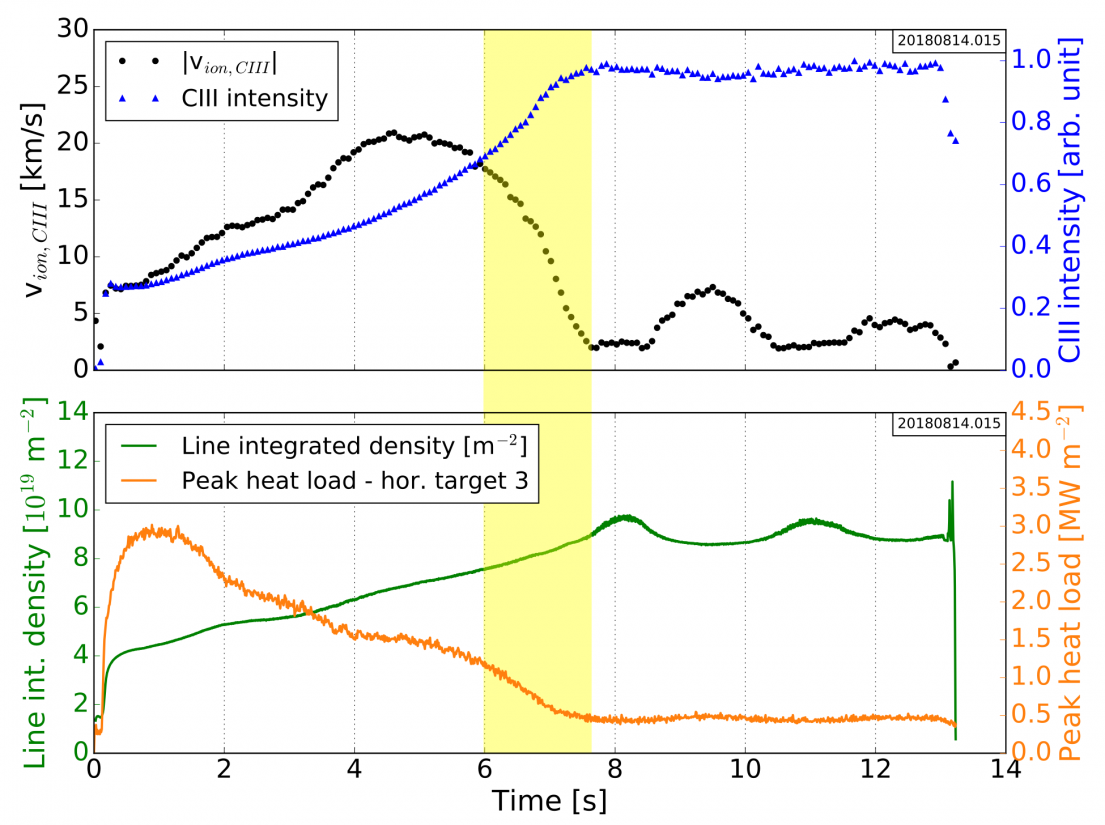 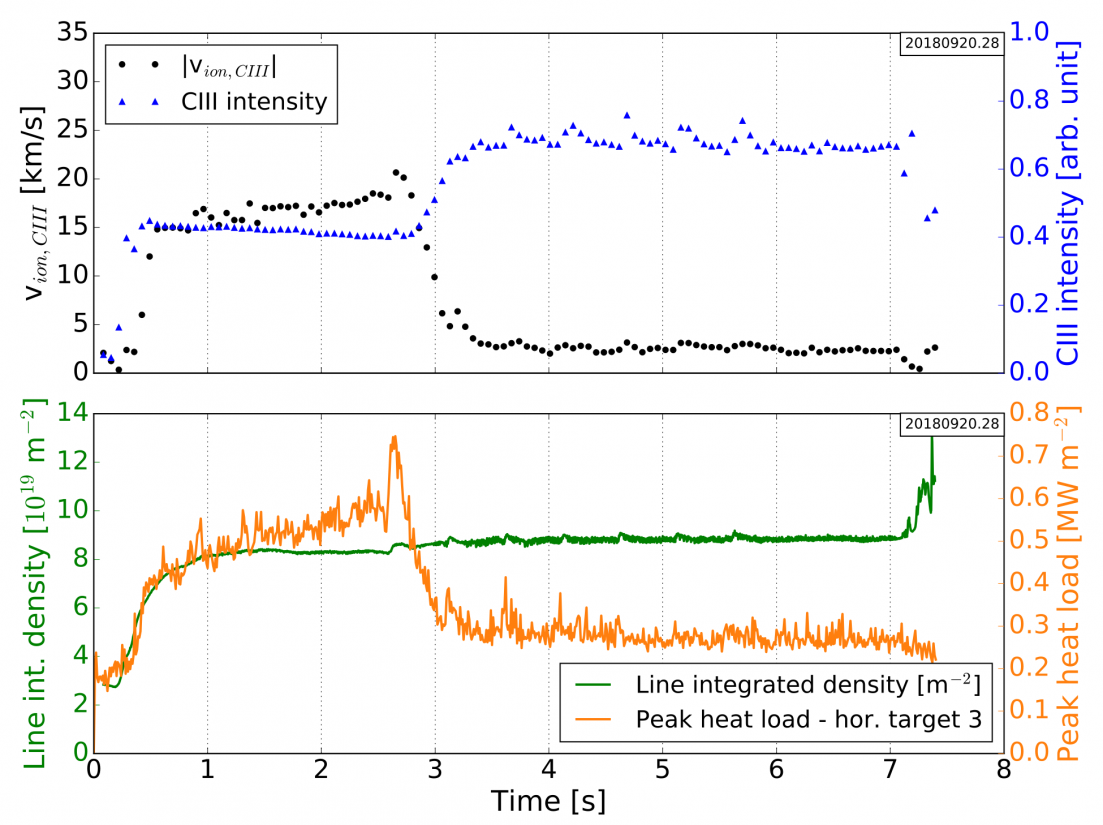