We have analysed cross-scale interactions between trapped-electron-mode (TEM) and electron-temperature-gradient (ETG) turbulence by means of gyrokinetic simulations. We find that (i) TEM turbulence suppresses ETG turbulence and dominates electron heat transport, and (ii) the suppression of ETG by TEM can ubiquitously happen even when TEM-driven zonal flows are subdominant. Additionally, from the comparison with hydrogen and deuterium plasmas, TEM-stabilized deuterium plasma is affected by ETG, resulting in simultaneous enhancement of TEM and ETG fluctuations. This brings a new perspective on the isotope effects of anomalous electron heat transport via cross-scale interactions between TEM and ETG turbulence.

Cross-scale interactions between electron- and ion-scale fluctuations are one of unresolved issues in turbulent transport. Our previous studies carried out direct numerical simulations of ion-temperature-gradient-mode (ITG) or micro-tearing-mode (MTM) and ETG turbulence, and revealed the mechanism of cross-scale interactions: e.g., ITG turbulent eddies suppress ETG streamers, and ETG turbulence damps short-wavelength zonal flows or localized current sheet of MTM (Maeyama 2017). Besides the theoretical studies, a possible impact of cross-scale interactions in ITER is explored via Tokamak experiments such as Alcator C-Mod, DIII-D (Holland 2017), and JET (Mantica 2020). On the other hand, TEM, which is known as one of important ion-scale instabilities, is not well analyzed in the context of the cross-scale interactions with ETG turbulence. A simulation study for a low magnetic shear plasma reported that TEM-driven zonal flows suppressed ETG turbulence (Asahi 2014). However, it is known that TEM turbulence have a variety of saturation mechanisms depending on plasma parameters where zonal flows are not necessarily dominant. Therefore, one of our key questions is whether TEM coexists with or suppresses ETG, if there is no dominant zonal flow.

To deal with this problem, we set up local flux-tube gyrokinetic simulations resolving electron and ion scales simultaneously. Magnetic field is a circular torus geometry with $q=1.4$, $s=0.8$, $r/R=0.18$. Plasma parameters are $R/L_{Ti}=1$, $R/L_{Te}=9.3$, $R/L_n=3$, $T_e/T_i=3$ and $m_i/m_e=1836$. In these parameters, ITG modes are stable since the ion temperature gradient is low. From the linear analysis, ion-scale fluctuations at $k_y\rho_{ti}<1$ are dominated by TEM, while the electron-scale fluctuations are at $k_y\rho_{ti}>1$ are ETG. Most unstable wavenumbers of these instabilities are roughly separated by the ratio of ion and electron gyro radii.

Figure 1 plots the comparison of electron energy flux spectra. At the early phase of nonlinear simulation ($t=9-12R/v_{ti}$), ETG modes rapidly grow up and saturate. Then ETG driven streamers peaks around $k_y\rho_{ti}=3$ and dominate electron energy flux. Simultaneously, long-wavelength TEM slowly grows up. After the growth of TEM ($t=20-40R/v_{ti}$), TEM turbulence around $k_y\rho_{ti}=0.3$ dominates electron energy flux. One finds that the peak of ETG at electron scale disappears in the presence of TEM. The energy flux level is comparable to that in a low-resolution (single-scale TEM turbulence) simulation plotted in Fig. 1. 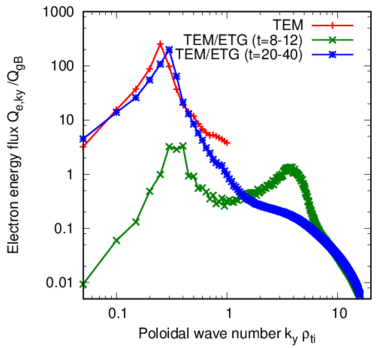 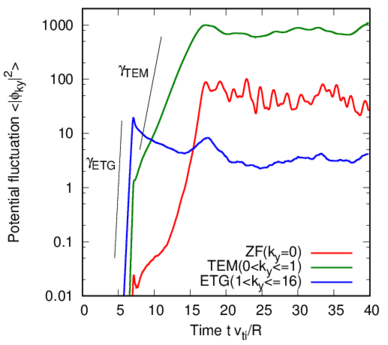 We have also carried out a multi-scale TEM/ETG turbulence simulation for the deuterium plasma ($m_i/m_e=3672$), where linear growth rates of TEM are reduced by the collisional isotope effect (Nakata 2017). Simultaneous enhancement of TEM and ETG fluctuations with stronger electron heat transport than that in the ion-scale TEM turbulence simulation is observed, suggesting cross-scale interactions of TEM and ETG turbulence.

Our study expands the understanding of cross-scale interactions between ion- and electron-scale turbulence. It is found that ETG is suppressed by TEM turbulence even when zonal flows are subdominant. Comparison with hydrogen and deuterium plasmas brings a new insight into isotope effects via cross-scale interactions. Experimental measurement of electron-scale fluctuations will be desired future in context of isotope effects.