Here we report a neutronics study in a blanket mock-up using a compact fusion neutron source. With the optimized discharge condition, the neutron source stably produces fusion neutrons with the production rates > 10^5 n/s in a deuterium?deuterium (DD) operation (neutron energy: 2.45 MeV). The operation showed a non-linear increase with the applied voltage, in consistent with the cross section of D(d,n)3He reaction. The tritium production rate (TPR) was measured by a single-crystal chemical vapor deposition (CVD) diamond detector with 6LiF film. 6Li(n,t)4He reaction rates in the experiments were evaluated by integrating triton peak appeared in the energy range of 2.1-2.5 MeV and then compared with the results of Monte Carlo simulations to obtain the calculated to experimental (C/E) values. As a deuterium?tritium (DT) operation largely increases the neutron yield and enables an experimental validation of tritium breeding ratio (TBR), the present approach using the compact neutron source is beneficial for design of fusion blankets.

TBR defined as the rate of bred tritium to burnt tritium in DT plasma must be greater than unity for a self-sufficient fueling of a fusion reactor. An experimental validation of TPR with spectral neutron flux is vital to guarantee the self-sufficiency as computational errors are introduced by uncertainties in the nuclear data, a discrepancy in the simulated and the actual geometries, and an unexpected neutron absorption by impurities. However, opportunities for conducting neutronics experiments have been limited by low availabilities of neutron irradiation facilities across the world. Herein, we propose a neutronics experiment using a discharge-type compact fusion neutron source, which facilitates evaluations of breeding performance of a blanket mock-up. We have developed a compact fusion neutron generator, housing a negatively biased cylindrical cathode and a grounded anode [A]. 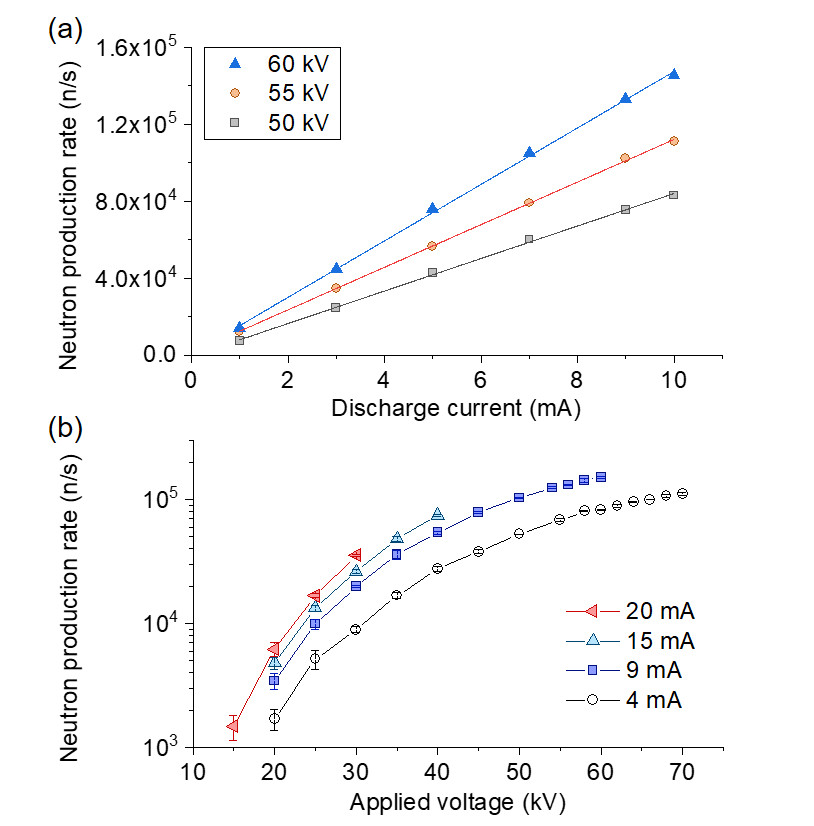 In previous studies, however, instability of glow plasma during operation and an inaccuracy in neutron production rate were observed [A] [B]. Thus, an optimum condition for a stable operation was investigated by altering discharge conditions as shown in Fig. 1. The neutron production rate was linearly increased with discharge current (Fig. 1a). The neutron production rate increased exponentially with voltage (V < 30 kV) and saturated above 60 kV (Fig. 1b), in consistent with the cross-section of D(d,n)3He fusion reaction. Consequently, the discharge condition was optimized to be 9 mA and 60 kV, which yielded the neutron production rate of 1.4 ×10^5 n/s. A rectangular blanket mock-up (20 × 40 × 55 cm) composed of graphite reflector, polyethylene moderator, and lithium carbonate breeder blocks were irradiated with DD fusion neutrons. TPR was measured by using the CVD diamond detector with 6LiF film (6Li enrichment: 95.6%). The detector was calibrated with an unsealed 241Am ?-source; the reaction rate per count was obtained to be 12.0 counts per reaction. The validity of the value was confirmed by neutron and triton transport calculations using PHITS code. Fig. 2a represents geometry of the experimental set up and the thermal neutron flux distribution calculated by MCNP 5.0 code with the FENDL 2.1 nuclear data. The results showed that DD fast neutrons were readily moderated in the blanket mockup. Fig. 2b shows the measured spectrum of energetic charged particle generated by 6Li(n,t)4He reaction using the diamond detector. The triton peak appeared in the energy range of 2.1?2.5 MeV, while broad helium counts were detected below the energy due to energy straggling in the film. The integration of 3H count in Fig. 2b gave the reaction rate per source neutron (s.n.) of 4.05×10^-7 (/s.n.). The calculated value was 3.16×10^-7 (/s.n.) with statistical error of <4% where the most of 6Li(n,t)4He reactions occurred by moderated neutrons in the energy range of 0.01-1 eV. The detector was positioned at two positions and different irradiation time; the C/E values in the experiments were evaluated to be 0.71-0.78. 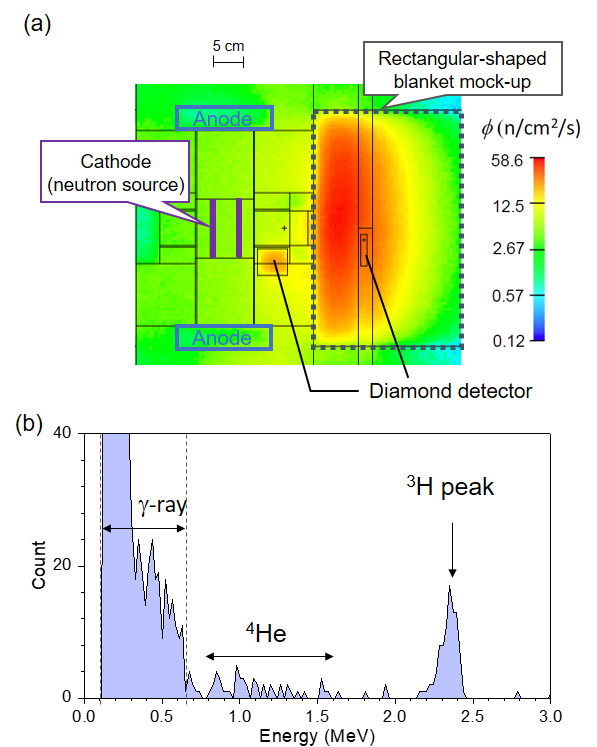 The use of a compact fusion source is proposed for evaluating tritium breeding performance of a blanket mock-up. As a consequence of the developments, the neutron source can stably generate fusion neutrons with production rates greater than 10^5 n/s in a DD operation. Even greater neutron production rate (about a factor of two) will be achievable in a DT operation, enabling a DT neutron transport experiment in a blanket mock-up to validate its TBR. We believe the approach using the compact source can contribute to future design studies of fusion blankets.