Effective thermal energy utilization from in-vessel components is important issue to develop the plant concept of a fusion DEMO, because there are several in-vessel components in a fusion power plant. How to use of divertor thermal energy is now a key for development of the plant concept for JA DEMO. Following two options are newly proposed as for the divertor thermal energy considering tritium permeation: its application to electric power generation and to hydrogen production. Furthermore, adaptability of those options against the future grid system is also evaluated in this paper.

1. Introduction
Thermal power outputs have been evaluated and the primary heat transfer system (PHTS) has also been developed for Japan’s fusion DEMO (JA DEMO) [11,12,13]. Thermal power outputs from in-vessel components are shown in Fig.1. Heat utilization from divertor with Cu-alloy pipe (Div-Cu-alloy) is remained to be applied to energy production system in JA DEMO. In this paper, we propose two options for heat utilization from Div-Cu-alloy and develop the overall plant concept of energy production in JA DEMO with careful consideration of tritium permeation into the coolant. Adaptability of those options against the future grid system is also evaluated. 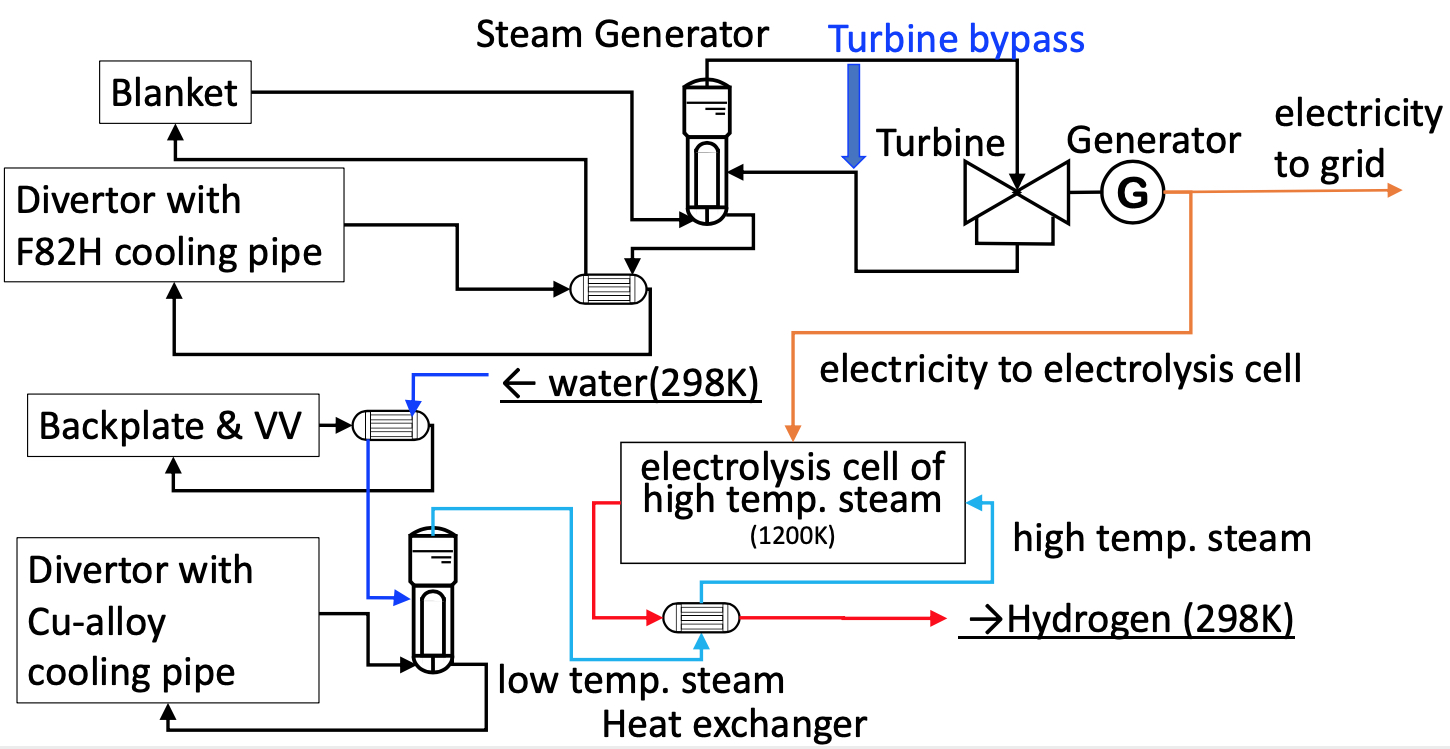 Such effective use of waste heat for hydrogen production has been proposed in a commercial reactor design [15] This hydrogen production concept is applied to JA DEMO plant system, but the concept is improved to avoid the tritium permeation using heat exchanger and steam generator (Fig.2). The vaporized steam is heated up to around 1200K in the heat exchanger, and then hydrogen and oxygen are generated in the electrolysis cell of high temperature steam. Thermal power of 42MWth from the backplate &VV and Div-Cu-alloy and electricity 229MWe from generator enables to produce hydrogen 1.77kg/s at the rating operation of hydrogen production.
Second, application to electric power-up system is developed. Pre-heating system of turbine coolant by Div-Cu-alloy heat is installed into PHTS between steam turbine downstream and steam generator in Fig.2. Resultantly, the extracted steam from upstream of turbine for pre-heating can be reduced, ant then electric power generation can increase by 22.4MWe. When the coolant from Div-Cu-alloy is applied to pre-heating system, an intermediate heat exchanger is also installed to avoid the tritium permeation to the secondary coolant. The tritium permeation to the secondary coolant in PHTS from blanket is also evaluated, and the result shows the total permeated tritium less than Japan’s light water reactor limit. Because of comparison of permeated influx to coolant in blanket (3.0g/day) and divertor (1.25x10-2g/day) which are evaluated with TMAP code, permeated tritium from Div-Cu-alloy to the secondary coolant is considered to be negligible.

3. Adaptability to partial load operation in the future grid system
Development of partial load operation is recommended in Japan’s Policy to promote R&D for a fusion DEMO reactor [16]. As a typical case, adaptability to Duck Curve [17] in the grid is examined for the above two plant options.
In case with the hydrogen production system, the basic operation concept of JA DEMO for Duck Curve is as follows: During ramp-down and over-generation phase, surplus electricity is applied to generate hydrogen. Even in the over-generation phase, electric power generation might be stopped by using turbine bypass in Fig.2. During ramp-up phase of Duck Curve, electricity for hydrogen generation reduces rapidly, and the rating electricity is transfer to the grid. Fig.4 shows the typical operation pattern adaptable to Duck Curve by production of both electricity and hydrogen. 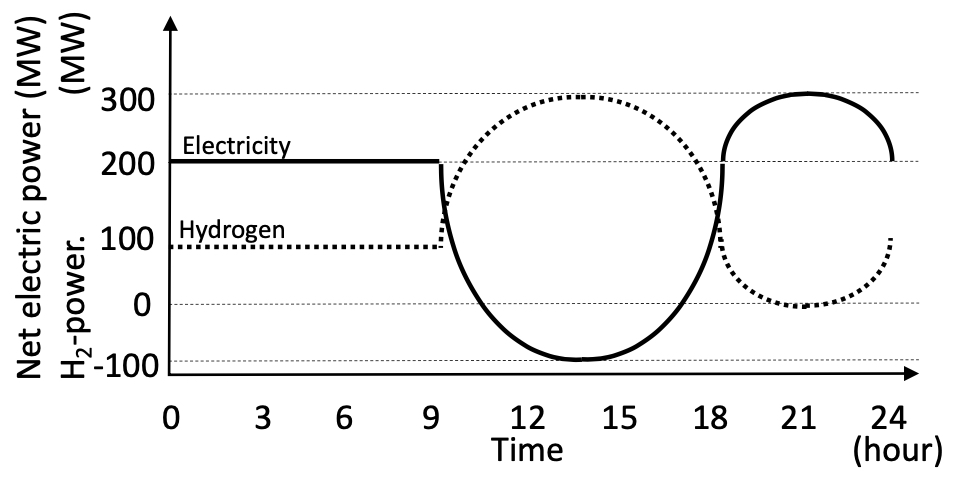 In case with the electric power-up system, the turbine bypass system serves as the main role in Fig. 2. The time-scale difference between plasma ramp-up (~100 sec) and turbine ramp-up (~ hour order) has been made clear. We decided to install the turbine bypass to synchronize between plasma and turbine to compensate this time-scale difference. This turbine bypass is effectively applied to carry out the partial load operation similar to electric output in Fig.4. This system has enough resilience to play a role as a controller in the grid.
In conclusion, this paper reveals that fusion energy can play not only the role of the baseload, but also the role of ancillary service in the grid. To show this fact, first, the plant concepts for production of both electricity and hydrogen in JA DEMO are developed with careful consideration of tritium permeation. Second, operation methods adaptable to partial load operation such as Duck Curve by electricity and hydrogen production are proposed.
[11] R.Hiwatari et al.”Development of plant concept related to tritium handling in the water-cooling system for JA DEMO”, Fus. Eng. Des. 143(2019)259
[12] Y.Miyoshi et al., ” Cooling water system design of Japan's DEMO for fusion power production”, Fus. Eng. Des. 126 (2019)110
[13] Y. Sakamoto et al., “Development of Physics and Engineering Designs for Japan’s DEMO Concept,” IAEA 27th Fusion Energy Conf., FIP/3-2, Gandhinagar, India, October 22-27, 2018
[14] K. Gi et al., “Potential contribution of fusion power generation to low-carbon development under the Paris Agreement and associated uncertainties”, Energy Strategy Reviews 27 (2020) 100432
[15] K. Okano, Y. Asaoka, R.Hiwatari et al., Journal of plasma fusion research Vol.77 p.601 (2001) (in Japnaese)
[16] Japan’s Policy to promote R&D for a fusion DEMO reactor, MEXT, Japan, (2017)
[17] California ISO Fact sheet, “What the duck curve tells us about managing a green grid”, 2016