Here we report an innovative divertor pumping system using proton conductor pump, fuel proceesing system with isotopic recycling by this device, and its impact on the tritium fuel sufficiency of DEMO, particularly that enables commissioning without initial loading of significant quantity of tritium prior to its operation. Proton conductor pump is developed by the authors that actively compress and transport hydrogen isotope gases from the divertor region. Pure DT mixture can immediately be recycled to the fuel feed that significantly shorten the cycle time and tritium inventory. On the other hand, modelling of fuel cycle of DEMO and its commissioning operation suggests plant can manage tritium self sufficiency with this direct recycling path.
It is well known that ITER will consume majority of world tritium supply in the near future, and any DEMO reactor following it will have to acquire its own fuel. The authors have reported that fusion DEMO can produce its tritium fuel to be needed in the series of tests by its own operation from initial DD discharge until reaching long pulse or steady state full power burning with no external supply[1].
Figure 1 shows the simplified primary fuel cycle that continuously process plasma exhaust and return it as a fuel. It is generally understandable that closed tritium fuel plant can collect tritium in the vacuum vessel and other components in the primary fuel cycle within reasonable dwell operation time, or in steady state operation. Such a fuel cycle requires some specific features related to the throughput and response time that has not been given sufficient consideration in the past. Typically DEMO will have the range of a few % of burnup and throughput of 200 – 500 Pam3/s in steady state operation. Fuel cycle evacuates and pressurizes plasma exhaust, chemically purifies hydrogen isotopes followed by an isotope separation process to prepare the fuel supply to the plasma. In the early stage of commissioning, fuel cycle will essentially be operated also in steady state, while tritium is supplied to the plasma in the pulses with dwell period that allows tritium recovery after the discharge. 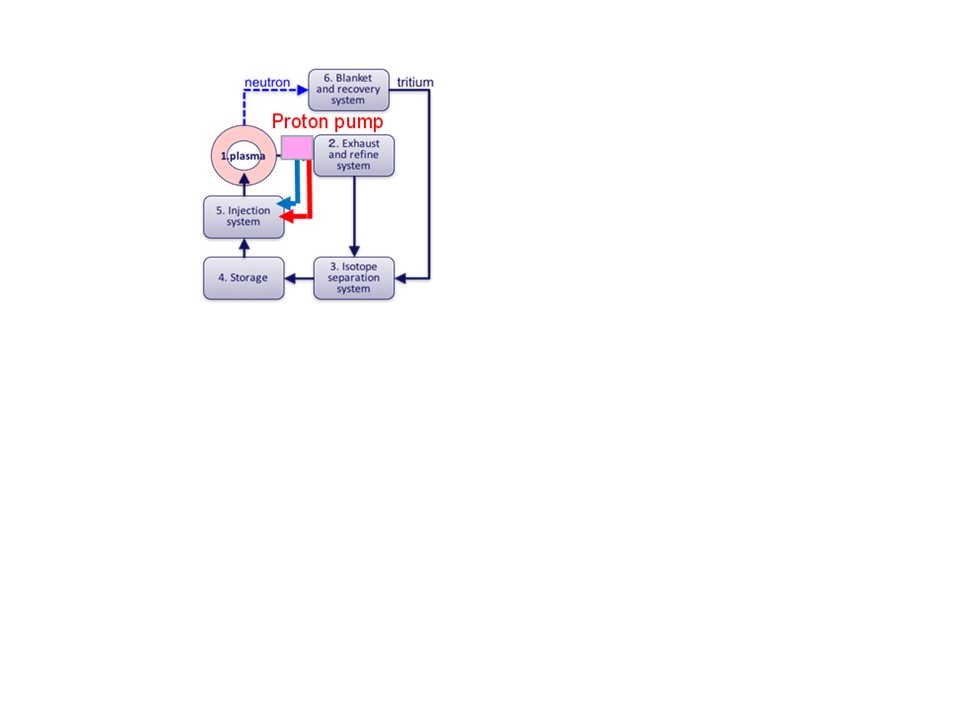 Primary fuel cycle must process all the exhaust and return pure DT to the main plasma with minimal cycle time. Throughput is given by the fusion power and burn fraction. Since inventory is estimated from throughput multiplied by residential time constant, if total recycle time constant is too long, required tritium inventory will not be acceptable. For self-sufficiency, tritium has to be available for the plasma operation by the processing within the cycle time. In realistic operation scenario of the DEMO, cycle time of primary fuel cycle and each discharge pulses followed by dwell will have to be consistent with dynamic operation cycle. Primary fuel cycle involves condensed phase of hydrogen such as liquid in the distillation column, adsorption on catalysts or cryopump, and solid in the pellets, those requires considerable residential time and inventory of tritium fuel.
In this study, impact of the direct fuel recycle in the primary processing loop with minimal purification is considered and analyzed. Fuel system was described by a dynamics model, considering realistic commissioning of DEMO, that will be mainly pulsed DD and low concentration DT with full breeding blankets. 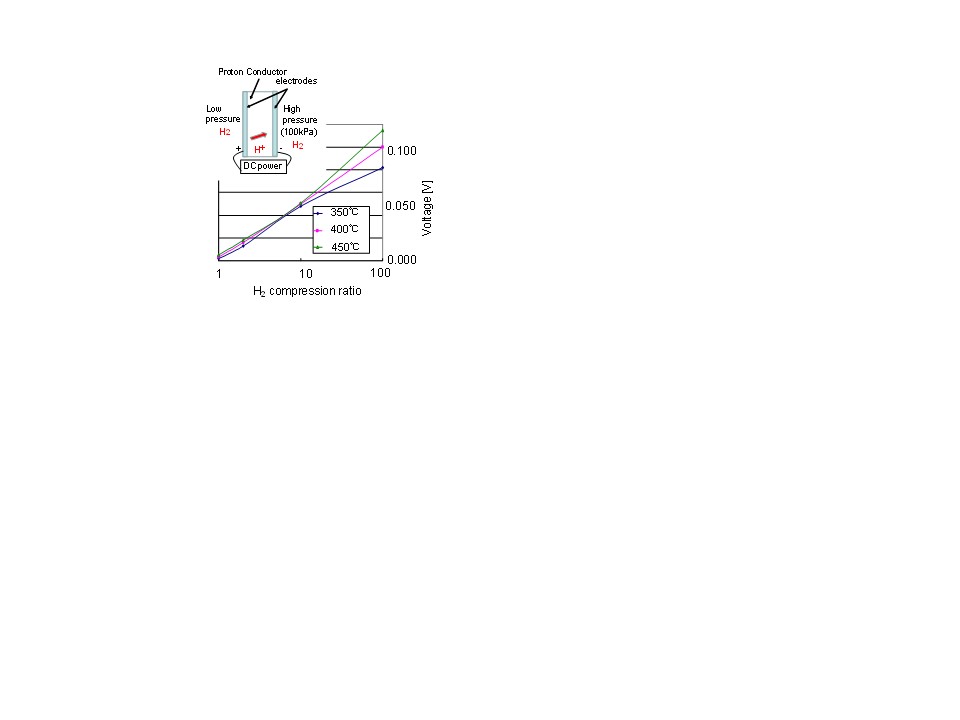 For the direct recycling of the bypassed DT fuel, an innovative concept of Proton conductor plates that selectively extract, pump and compress the purified DT fuel, is proposed and evaluated. Fig.2 shows the principle of the pump. Proton conductor membrane with both side with hydrogen permeable electrode can transport hydrogen isotopes electrochemically at large compression ratio. As experimentally confirmed and shown in the Fig.2, pumping characteristics is described by the Nernst’s Law, indicating high efficiency, typically 1 order of compression for 50 mV. For the divertor pumping, required compression will be 1 Pa to 100kPa, that is feasible with reasonable voltage. This pump has unique and particularly suitable characteristics for divertor pumping, because it does not have any mechanical action while active and controllable compression is possible.

Fig.3 shows the unique and attractive features of for divertor pumping for this purpose. Proof of principle experiments in Fig.2 showed the practical pumps for immediate recycling from divertor will be feasible. Pure hydrogen isotopes are selectively compressed for the fuel recycling, while residues that includes He ash and other impurities are sent to the plasma exhaust processing of the fuel cycle.
Major advantage of the application of this pump is a reduction in processing time and inventory. Typical time constant derived from the protonic impedance was around 20 seconds, because hydrogen ions are the main carrier in the conductor, as a kind of condensed phase. Since other part of the direct recycle path shown in Fig.1 has typical space velocity of orders of second, it significantly reduces the cycling time and fuel inventory by 2 orders of magnitude. The fuel loop which involves condensed phases such as distillation column, typical have time constant and invories of hours and kgs respectively.
This pump can be attached to the duct close to the divertor exhaust, for instance, approximately 1m2 plate for each divertor cassets. It will provide sufficient conductance and thus pumping capability. Further, because of the isotopic difference in the permeability, proton conductor pump will provide slight isotope separation for adjusting DT contents in the fuel.
This study suggests the practical and important fuel cycle strategy for fusion development. Bypassing DT fuel with practical pump will reduce the entire tritium inventory in the plant and shorten the recycling of tritium fuel. In the dynamics of fuel cycle, this feature means small amount of tritium injected to the pulsed plasma can be recovered in significantly shorter intervals and be ready for the next discharge. Such an efficient use of minimal tritium with self-sufficiency provides practical and feasible solution for the commissioning of the entire DEMO plant without external source. This result poses major impact on the fuel strategy for DEMOs after ITER.