One important project to involve the 8 core technologies in the K-DEMO roadmap is the development of integrated numerical simulations of the K-DEMO reactor, so called, V-DEMO (Virtual DEMO) project. The virtual reactor system is proposed to be a “digital twin” of K-DEMO reactor, and hence will aid the design activities of K-DEMO and safety analysis and licensing procedures to begin with. In the reactor operation stage, the V-DEMO system will help code validation, operator training and advanced reactor designs.

The critical role of V-DEMO project is to provide optimized K-DEMO designs upon given input conditions. If a K-DEMO is designed to be built now, options are limited by the current technologies. On the other hand, a K-DEMO is built by market forces 20 years in the future, that is, after the demonstration of burning plasmas by ITER, a broad spectrum of options can be considered. 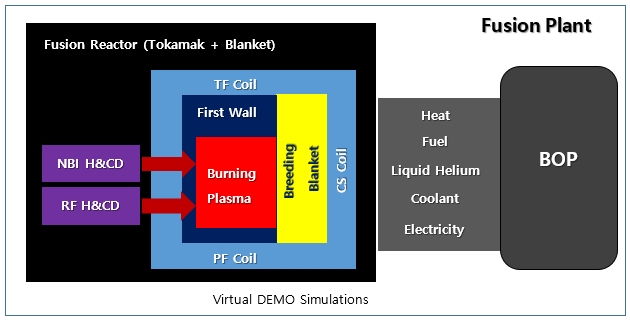 The main goal of the V-DEMO project can provide the necessary design options when the decision is made to build a K-DEMO in the future. The digital twin of K-DEMO reactor will be based on integrated knowledge of core (burning plasma) and boundary plasma physics, plasma-material interaction physics, blanket and power plant technologies of BOP (Balance of Plant). Particularly, recent developments of information technologies such as supercomputer-aided simulations, artificial intelligence (AI), big data (BD) and machine learning (ML) are expected to advance current tokamak simulations and power plant simulations to assimilate K-DEMO reactor at an unprecedented level.

Finally, the strategy and plans for the development of V-DEMO should be established. A staged development plan is prepared and the strategy for collaboration between power plant engineering community and fusion community is studied. A strategy to accelerate V-DEMO development with artificial intelligence and digital twin technologies should be established by engaging software engineering community. The critical part of the project is the validation and verification by comparisons of existing experimental data obtained by KSTAR and ITER. The superconducting tokamak KSTAR will provide high performance plasma data of DEMO relevant density and DEMO relevant scenarios. ITER will provide most critical burning plasma data to benchmark the core plasma simulations as well as the engineering data of tokamak systems including TBM (test blanket module) data. Additionally, neutron sources are critical to the development of V-DEMO system as it provides the neutron related data for materials, structures, tritium breeding and many other fusion reactor systems. 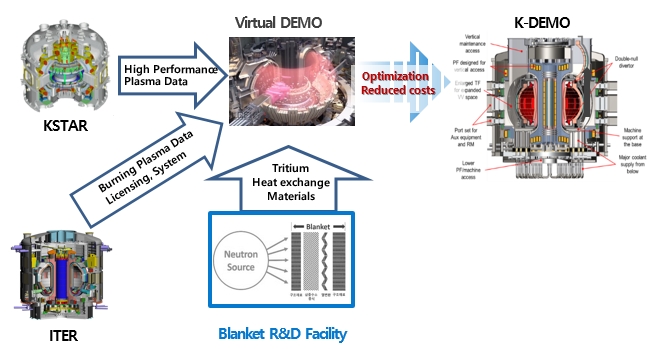