A D-D fusion reaction during the Alfvénic collisional merging formation process of a field-reversed configuration (FRC) plasma has been detected by the developed fast response neutron detector in the FAT-CM device at Nihon University [A]. The neutron radiation and its dependency on the translation velocity of FRC plasma have been observed as an experimental evidence of an excited shock heating in the collisional merging of the oppositely-translated FRCs. Two dimensional MHD simulation does not predict high enough ion temperature that produces fusion reaction, thus the observed significant amount of neutron radiation indicates the rapid acceleration of non-thermal ions through the excited shock as one of the regeneration channels from the kinetic to the internal thermal energy.

In an FRC, a high beta ($ \beta $ ~ 1) simply-connected confinement region purely with poloidal magnetic flux is isolated in a mirror-like open magnetic field structure (Fig. 1). Because of this unique feature of the FRC, heating/current drive technique is almost limited to a tangential neutral beam injection. Therefore, building-up the poloidal flux being sufficient to capture the tangentially injected fast beam ions is the most important development issue. The super-sonic/Alfvénic collisional merging FRC formation has been proposed and conducted as an effective formation technique that does not inhibit the uniqueness of FRC. Because a long-lived hot FRC, using the super-sonic/Alfvénic collisional merging formation, has been demonstrated in the C-2W device at TAE Technologies [B], FRC attracts attention again as a steady-state fusion reactor core. In the ideal MHD equilibrium of FRC, pressure gradient, poloidal magnetic flux and toroidal current must be balanced while keeping its beta value of almost unity. Therefore, these dynamic processes must be completed faster than the relaxation and magnetic diffusion times to avoid energy and flux losses during the translation and merging process, where the plasmoid experiences drastic change of its volume and shape. On FAT-CM, behavior of the super-sonic FRC translation/collision has been investigated.

The FAT-CM device has stainless-steel confinement chamber with quasi-steady state external magnetic field. Initial FRCs are formed by the field-reversed theta-pinch method in the two formation sections with deuterium gas-puffing. FRCs with electron density of ~1×10$^{21}$ m$^{-3}$ are typically generated by the main compression field of ~0.4 T, after which they are accelerated by the gradient of the external guide magnetic pressure. The translated FRCs collide in the middle of the confinement chamber at the axial velocity in the range of 100 – 200 km/s (Fig. 1). 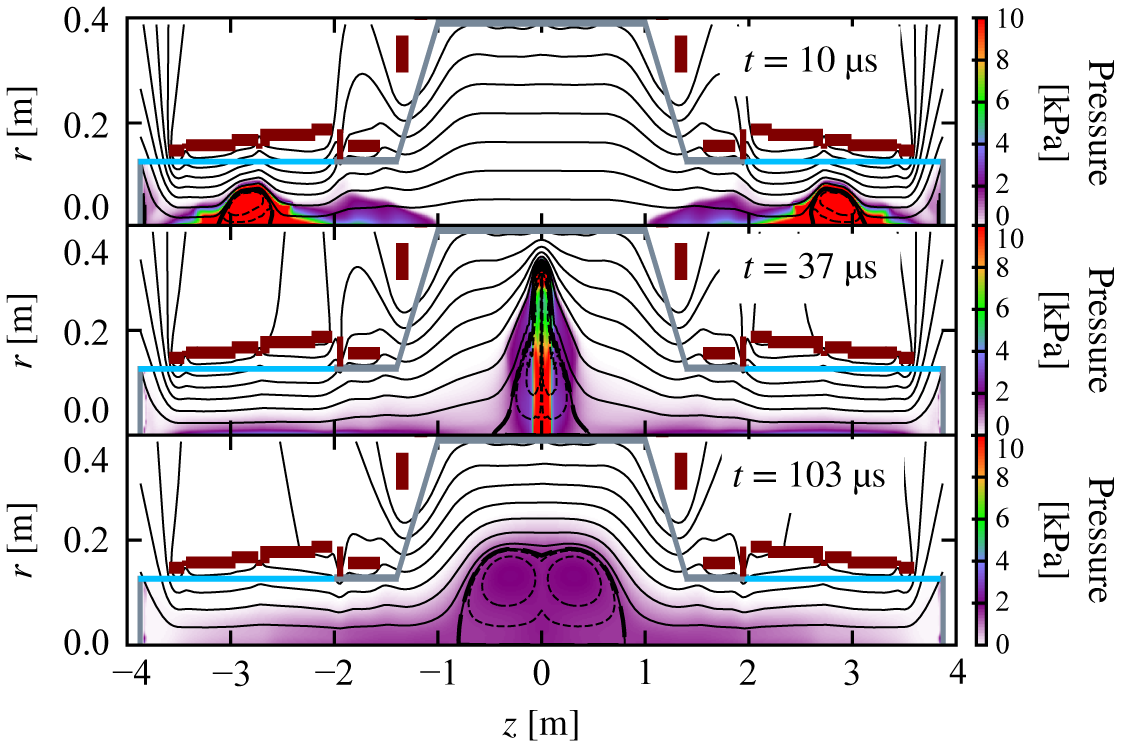 Figure 2 (a) traces time evolutions of axial translation velocity and characteristic velocities of Alfvén speed $V_{A}$ and sound speed $V_{S}$ at each FRC position during the dynamic translation process, simulated by 2-D resistive MHD equilibrium code. Note that in the super- Alfvénic collisional merging process the 2-D simulation cannot reproduce discontinuous profile, non-thermal ion and non-axisymmetric components of the magnetic field caused by shockwave with reasonable accuracy. The FRC in the formation region is accelerated by the external magnetic pressure up to $V_{A}$ and then translated into the confinement region while keeping the axial velocity. Therefore, the translation velocity exceeds $V_{A}$ and $V_{S}$ (typically ~50 and ~100 km/s, respectively) when FRC enters the confinement region as shown in Fig. 2(b). 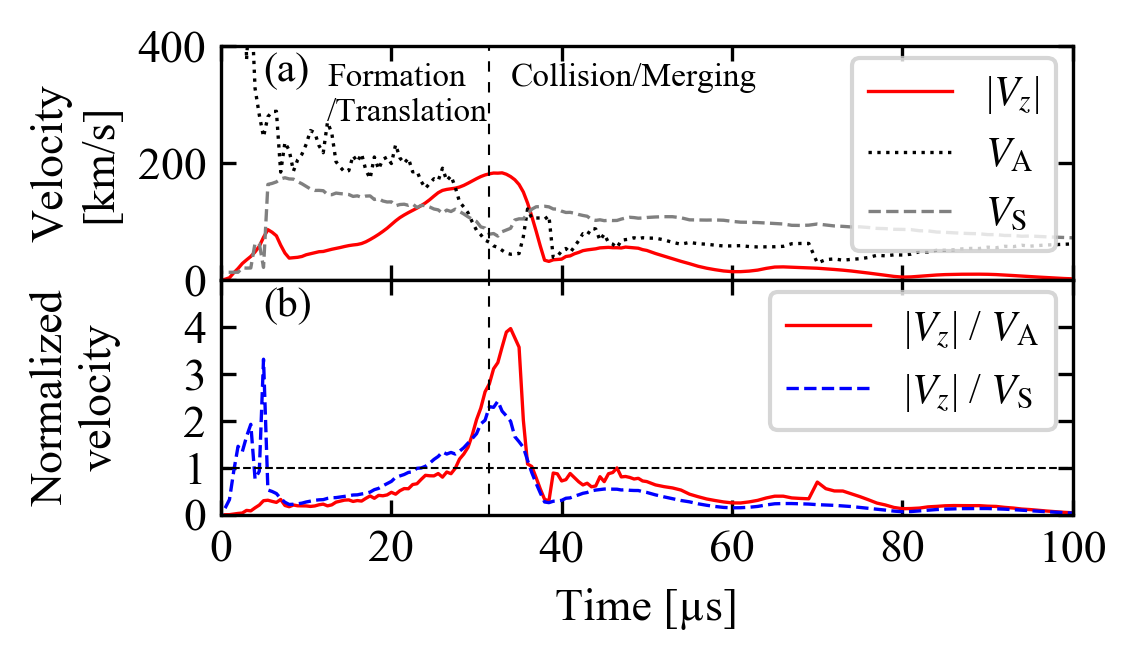 As the experimental evidence of the excited shock, neutron detection has been performed during and after the collisional merging process by the newly-built fast response neutron detector consisting of a columnar plastic scintillator and a photomultiplier tube. The neutron measurement indicates a quick rise of the neutron flux when FRC translation velocity is faster than the Alfvenic velocity as seen in red solid line of Fig. 3(a). Here, blue dotted line denotes the collisional merging case with sub-Alfvén velocity, while green dashed line is single-sided FRC translation case without collision/merging. The number of D-D reaction cannot be explained by the adiabatic heating process under the assumption of resistive MHD model (Fig. 1). Therefore, the observed fusion reaction appears to be caused by the accelerated particles in the excited shocks. Soft X-ray (SXR) radiation detected by a surface-barrier diode with 37.5 $ \mu $m Be filter also shows a pulsed rise around $t$ ~ 40 $ \mu $s and following thermalization as shown in Fig. 3(b) [C]. 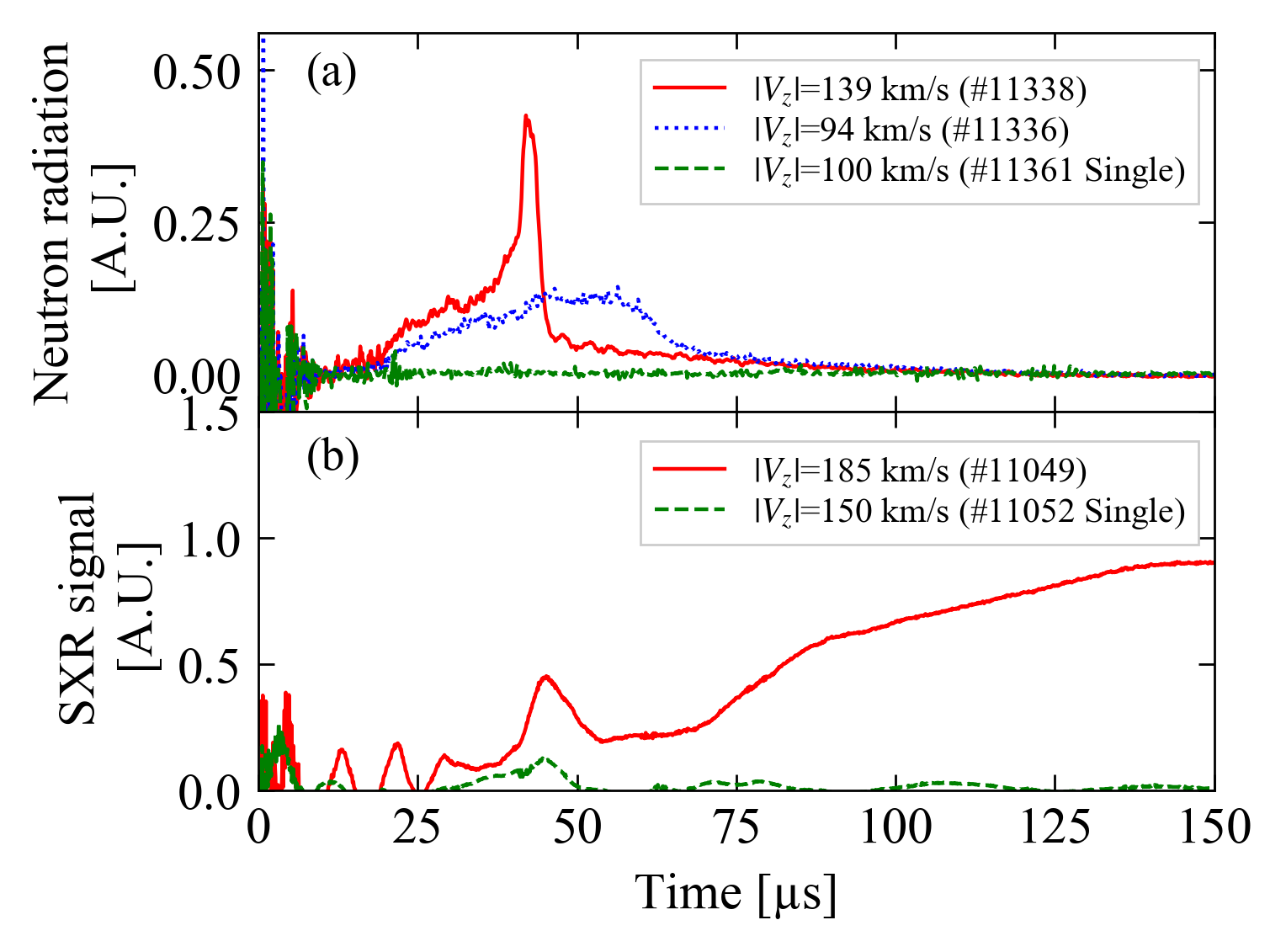 Gradual increase in the SXR intensity is consistent with the thermal equilibrium time of several tens of microseconds between ions and electrons of the FRC plasma. This also suggests the non-thermal ion component accelerated in the super-Alfvénic collision process.