For a laser fusion reactor of fast ignition$^{1,2}$, we design an optimum implosion with solid spherical target and inserted conical gold target, where we achieve the maximum areal density $\rho R_{\rm max}=0.46$ g/cm$^2$. According to the hydro-equivalent, the results correspond to the re-quired laser energies for the implosions are 82 kJ for the ignition-scale-target ($\rho R_{\rm max}$=1.1 g/cm$^2$), and 1.3 MJ for the burning-scale-target (($\rho R_{\rm max}$=2.5 g/cm$^2$) respectively, which are significantly improved over our previous design work$^{3}$.

In the fast ignition of laser fusion, a reliable target design is required for an ignition and burning scale experiments. The fast ignition scheme consists of two phases, compression and ignition. In this paper, we discuss the first phase, the compression of the DT fuel using implosion dynamics. However, the first phase is strongly affected by the optimization of the second phase, ignition dynamic. In previous work, we have designed an optimum target which is highly compressed using multi-step laser pulse irradiation to a solid spherical target with gold conical target. For the FIREX-I scale implosion, two-dimensional radiation hydrodynamic simulation result shows that the $\rho R_{\rm max}$ was 0.38 g/cm$^2$ at most. Based on the hydro-equivalent, we estimate that the requirement of implosion laser energy for ignition-scale-target was 135 kJ $^{3}$. In the previous work, the effect of relativistic laser plasma interaction (LPI) caused by the heating laser in the ignition phase was not considered sufficiently. In order to save the computational resources, the FIREX-I scale size target was optimized, and larger targets were extrapolated based on the hydro-equivalent. In the hydro-equivalent implosions, the same shock velocity, adiabat, mass density and laser intensity lead the similar hydrodynamics, where an implosion laser pulse duration is proportional to the initial target radius, $t_{\rm L}$∝$R_{\rm 0}$, a total implosion laser energy is proportional to the target volume, $E_{\rm imp}$∝$R_{\rm 0}^3$. The requirement of the implosion process of the fast ignition is determined by an areal density of compressed fuel, which is proportional to the target radius, $\rho R$ ∝$R_{\rm 0}$∝$(E_{\rm imp})^{(1/3)}$, if the maximum densities are same in the both scales.

On the other hand, relativistic LPI is nonlinear phenomena, and the radius of the inserted cone tip is determined by the specification of the heating short pulse laser, especially by the laser intensity, pulse duration, and energy$^{4}$. For example, in the FIREX-I scale target, the stopping range of electron beam should be lower than 1.2 g/cm$^2$ (=0.6 g/cm$^2$ in $\rho R$). That is, the slope temperature of the electron beam should be less than 1 MeV, and the intensity of the heating laser should be lower than the 3$\times$10$^{19}$ W/cm$^2$ approximately. On the other hand, for the ignition and burning scale target, the tolerance of the laser intensity is increased. Ac-cording to the Ponderomotive scaling$^{5}$, $T_{\rm REB}$=3 MeV corresponds to the laser intensity of 2.3$\times$10$^{20}$ W/cm$^2$ for a 2nd harmonics pulse ($\lambda_{\rm L}$=0.53 $\mu$m). Therefore, the radius of the tip of the cone can be smaller than the previous design study.

Based on the previous optimized design, only the radius of the tip of the cone is varied as a design variable to maximize the areal density of compressed fuel core. For the numerical survey, we conducted the two-dimensional implosion simulation using a radiation hydrodynamic simulation code, PINOCO$^{6}$, in which gold cone target for guiding heating laser is attached to the solid spherical fuel target (initial target radius: $R_0$=263 $\mu$m). The open angle, and thickness of the gold cone are 30 degrees$^{6}$ and 15 $\mu$m$^{3}$ respectively. The material of the tip is CD. The laser energy is 8 kJ ($\lambda_{\rm L}$=0.35 $\mu$m), and the laser pulse is multi-step in order to minimize entropy increase.

The maximum areal densities ($\rho R$) with respect to the tip position ($d_{\rm tip}$) and tip radius ($r_{\rm tip}$) are plotted in Fig.1. In our previous work$^{3}$, we have concluded that the optimum position of the cone tip is $d_{\rm tip}$=60 $\mu$m, considering the tip-breakup-timing and the divergence angle of the energetic electron beam. Finally, the areal density of fuel core is significantly increased by 21% to $\rho R$=0.46 g/cm$^2$ using a cone whose tip radius is $r_{\rm tip}$=13.3 $\mu$m. Considering the hydro-equivalent, $r_{\rm tip}$=13.3 $\mu$m corresponds to $r_{\rm tip}$=28.8 $\mu$m for the ignition target with 82 kJ, and $r_{\rm tip}$=72 $\mu$m for the burning target with 1.3 MJ of implosion laser energy, respectively. In this configuration, the intensity of the heating laser does not exceed 2.3×10$^{20}$ W/cm$^2$. The estimated required laser energies for implosion and other specifications are summarized in Fig. 2 (table). This requirement may be reduced by sophisticated laser spatial and temporal pattern controlling in future work. Furthermore, in order to optimize the whole process of fast ignition, integrated simulation is necessary including the simulation of heating process with kinetic codes$^{6,8-9}$. 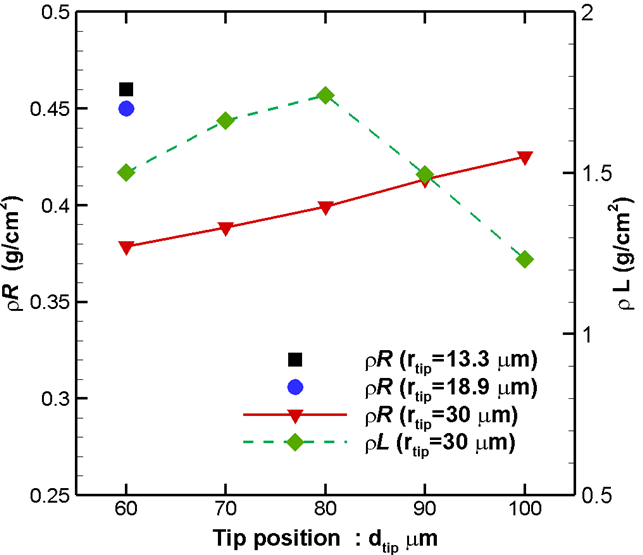