Here we report theoretical and numerical studies for efficient plasma heating by high intensity lasers with a lateral confinement of the laser-accelerated fast electrons in the laser spot area. Recent experiments using kilojoule (kJ) petawatt lasers show efficient particle accelerations and plasma heating, indicating that the lateral loss of fast electrons is considerably small. We here found that (i) the lateral motion of fast electrons in a relativistic laser-foil interaction has a 'random walk' nature due to the scattering by fluctuating fields at the plasma surface, so that the motion can be described as a diffusion. (ii) The slow, diffusive escape from the spot area corresponds to an effective confinement of fast electrons, by which the bulk electrons can be heated to keV temperatures via collisional processes. Particle-in-cell (PIC) simulations demonstrate that the diffusion model is applicable for the kJ lasers having large spot sizes. The present theory can provide a guideline for efficient isochoric heating for high energy density (HED) science including fusion studies.

Petawatt class high power lasers with relativistic intensities $> 10^{18}\,{\rm W/cm^2}$ can heat dense matters isochorically and create HED plasmas with giga-bar pressures [ 1] . Such a heating of bulk electrons is driven by the fast electrons accelerated by the laser at the target surface. Hence, for the efficient heating, confinement of the fast electrons is crucial. Many efforts for the confinement have been made, e.g., applying external magnetic fields, and using mass-limited or layered target with different resistivity. The confinement is also important for intense x-/gamma-ray generation and ion acceleration.
Recently, kJ class relativistic intensity lasers with picoseconds (ps) pulse durations are available such as LFEX, NIF-ARC, and LMJ-PETAL. In contrast to the ultraintense femtosecond (fs) pulse lasers with tight focusing down to the wavelength $1\,{\rm \mu m}$, the kJ lasers have large spot sizes exceeding $50\,{\rm \mu m}$. Experiments using the kJ lasers and thin foil targets demonstrated efficient ion accelerations [ 2] owing to a continuous heating of the fast electrons during the over-ps laser irradiation [ 3]. However, there has been a question why the fast electrons, which is expected to escape from the spot area almost at the speed of light, can benefit from the continuous heating.

In this study, we found the mechanism of a lateral confinement of the fast electrons in the spot area, which can enhance the bulk electron heating. For relativistic laser and thin foil interactions, the majority of fast electrons are trapped by the sheath electric potential and recirculate around the foil as illustrated by blue lines in Fig.$\,$1. We here find that, for a large spot laser (a), the lateral spread of fast electrons can be described as a diffusion process, or a 'random walk'. Namely, in (a), the fast electrons recirculate in the foil experience multiple scatterings by fluctuating fields excited in the spot region at both front and rear surfaces which are modulated by instabilities, e.g., the Weibel instability accompanying magnetic field filaments. This is different from the ballistic escape in the interaction with a small spot laser, Fig.$\,$1$\,$(b), where fast electrons experience the scattering at most only a few times before they escape from the spot area.
The random walk behavior with the multiple scatterings by the fluctuating fields is confirmed in the corresponding two-dimensional (2D) PIC simulation with laser spot radius $w = 35\,{\rm \mu m}$ and foil thickness $L = 5\,{\rm \mu m}$ as Fig.$\,$2$\,$(a) and (b).
The diffusion velocity $u_{\rm dif}$ can be derived from the diffusion equation $\partial P/\partial t = D\partial^2 P/\partial y^2$ where $P$ is the probability for the electron initially located at $y = 0$ to be at position $y$ at time $t$, and $D$ is the diffusion coefficient. At $y = w$, we have
$\begin{equation} u_{\rm dif}=\frac{D}{w}=\frac{L}{w}\frac{\tan\theta}{2}u_{\rm bal}, \end{equation}$

where $\theta = 1$\,rad is the average scattering angle for the isotropic scattering by the surface magnetic field, and $u_{\rm bal} = c \sin\theta$ is the lateral velocity for the ballistic motion. For the large spot interaction as in Fig.$\,$1$\,$(b), $u_{\rm dif} \ll u_{\rm bal}$ is derived from Eq.$\,$(1).
Owing to the slow lateral escape due to the random walk, the fast electrons accumulate in the spot area. The achievable density of fast electrons at the steady state $n_h$ is determined by the balance between the number of electrons escape from the spot and that injected from the laser-plasma interface as
$\begin{equation} 0=D\frac{\partial^2 n_h}{\partial y^2}+S, \end{equation}$

where the source term $S = \gamma n_cc/L$ indicates the inflow of fast electrons, and $\gamma n_c$ is the relativistic critical density. By solving Eq.$\,$(2), we see $n_h/(\gamma n_c)$ is greater than 1 and proportional to $(w/L)^2$, which we confirmed by a series of PIC simulations. Figure 3 shows the density evolution for the fast electrons with energies $>100$\,keV. In the large spot case (b), $\sim 20$ times higher density than the small spot case (a) is achieved, which clearly shows the effect of confinement, leading to the energy density of 9\,Gbar as in Fig.$\,$2$\,$(c). The peak density, $\simeq 12 n_c$ in Fig.$\,$3 (b), can be explained by the diffusion model with considering the extension of $L$ during the interaction.

For a solid Al target, the stopping power for an electron with energy 100 keV is $\sim 1$ keV/${\rm \mu m}$. Hence, when the electron travels a distance of $100\,{\rm \mu m}$ in the circulation, which takes several ps, without escaping from the spot area, the electron is capable to transfer energy to the bulk electrons via collisions, i.e., the drag heating. The lateral confinement keeps fast electrons inside the spot area over ps. When all the accumulated fast electron energy is distributed equally to the bulk electrons, the temperature becomes several keV. Collisional PIC simulations show such an energy cascade process in picoseconds, which is enabled by the lateral confinement discussed above. 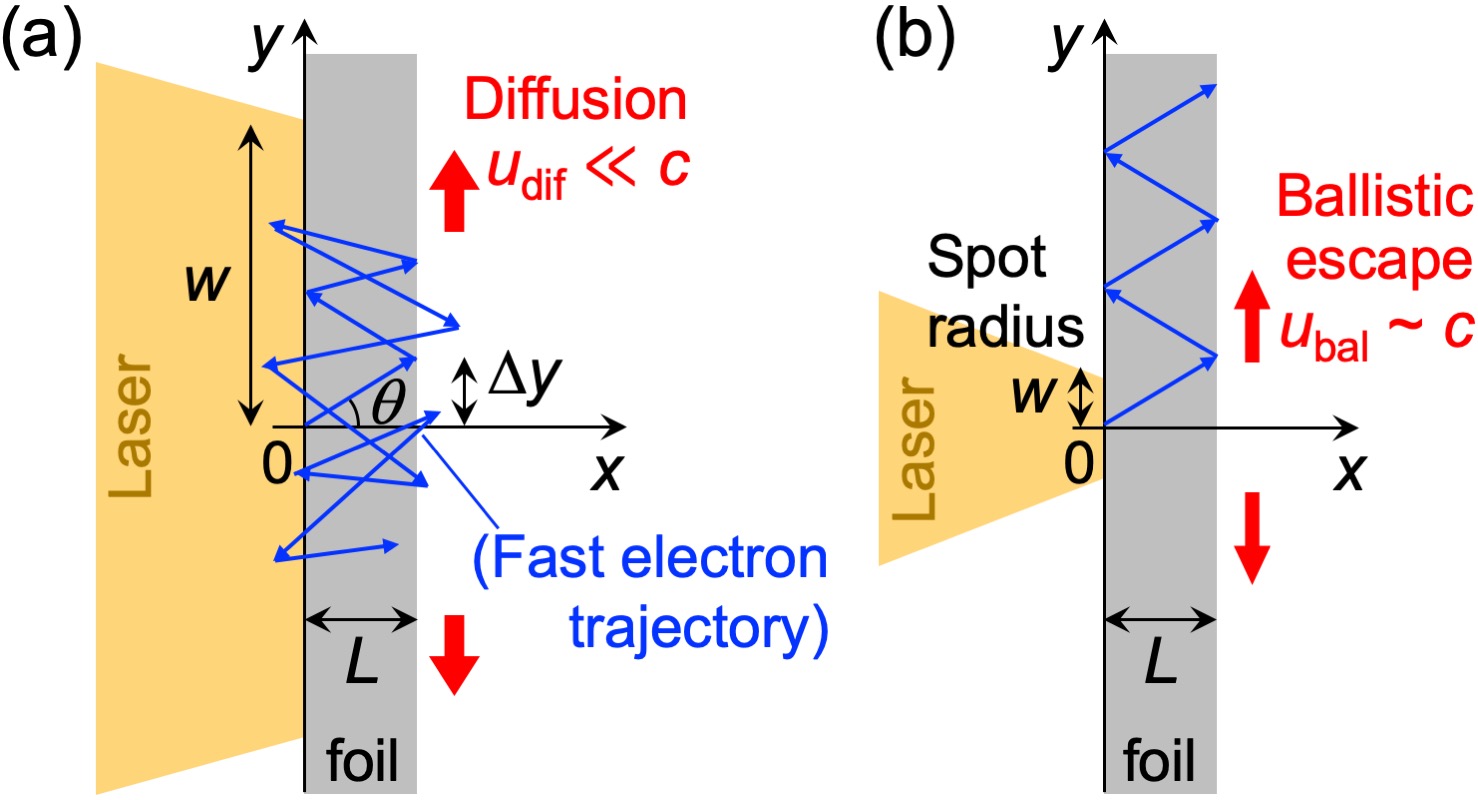 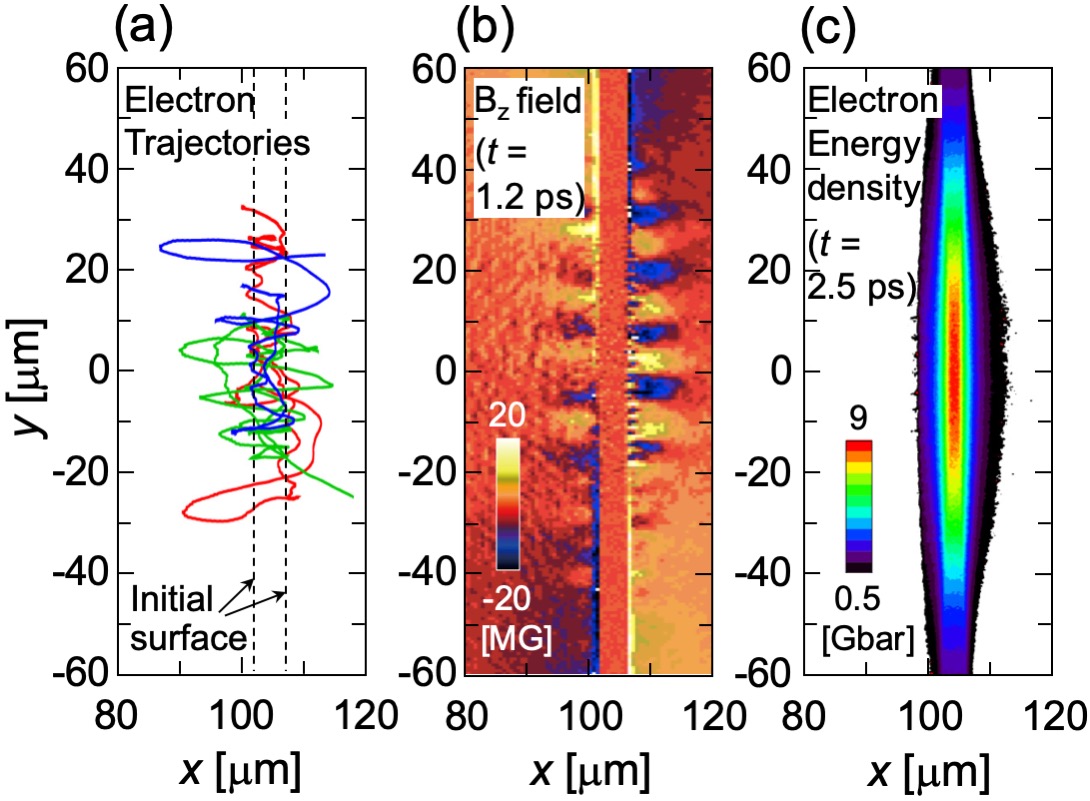