Introduction
An interesting phenomenon known as density incrustation at the interface of high Z / low Z plasmas was recently reported in high energy density (HED) systems like inertial confinement fusion (ICF) 1. Radiation transport and hydrodynamic motion of materials are intricately coupled in HED systems and their interplay gives rise to several interesting phenomena. Density incrustation (DI) is one such phenomenon characterized by the appearance of a cooling layer at the interface. Formation of cooling layers also occur in radiative shocks where radiation transport from the shock front preheats the upstream matter, cools the matter downstream and leads to a peak in temperature at the shock front. However, the phenomenon of DI is physically distinct from that of radiative shocks. This may arise at the interface when high Z plasma maintained at very high temperature drives a shock wave as well as a Marshak wave into the adjacent low Z material. DI increases the Atwood number at the interface increasing the growth rate of RT instabilities which is detrimental to the implosion dynamics.
The phenomenon was first observed by Meng et al. 1 in their study on Au-CH plasmas. Au at normal density was held at a temperature of 1 keV adjacent to CH at 1 eV in their work. CH was at an initial density of 10 g/cc whereas the ambient density of CH is usually ~ 1 g/cc. A sharp rise in density at the interface accompanied by a drop in temperature was observed in their study. The phenomena may appear in direct drive fusion applications 2 and in gas filled hohlraums where an increase in density was observed in the laser ablated Au plasma adjacent to the filling gas [2, 3]. However temperatures ~ 1keV are usually not encountered in laser driven ICF experiments and the density of the low Z material is also not as high. The motivation behind the present work was to evaluate whether the physical phenomenon of DI appears at lower temperatures presently attainable in ICF experiments with low Z materials at their ambient density.

Details of simulations
We performed 1D radiation hydrodynamics simulations using RADHYD1 developed in our group to study DI [4]. In our simulations, Au was maintained at 500 eV adjacent to CH at 1eV. The thicknesses of both the slabs were 1000 μm each. Au and CH were assumed to be at their ambient densities.
Material equation of state (EOS) and opacity data were generated from the wide range EOS library SBCRIS and OPIND package respectively. Solid and fluid phases were modeled separately and matched at normal density to generate a wide range EOS library SBCRIS for materials applicable to HED systems [5, 6]. The opacity of Au and CH plasma for the required range of densities and temperatures were generated using opacity package OPIND developed by us [7]. OPIND is based on Average atom model and is applicable for thermodynamic regime where local thermodynamic equilibrium is a valid approximation.

Result and Discussion:
Our aim was to study whether the phenomenon of DI appears if Au plasma is maintained at lower temperatures. To this end, we varied the temperature of Au plasma from 300 eV to 500 eV. We observed that DI does occur and the magnitude of the incrustation increases steadily with rise in temperature as shown in Figure 1. 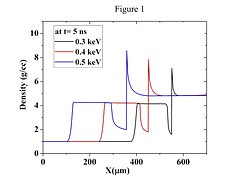 We observed an increase in the magnitude of incrustation with increase in initial density of the low Z plasma as well in our simulations. This indicates that at higher temperatures of Au plasma ~1keV and high density of CH plasma, higher magnitude of DI will be observed 1. This was verified in our simulations as well. The evolution of the DI at the interface and the shock wave inside CH is presented in Figure 2. We observed that the phenomenon is not transient and peak in density due to DI is maintained at later instants of time as well. 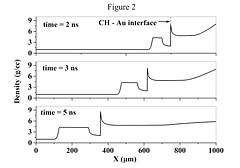 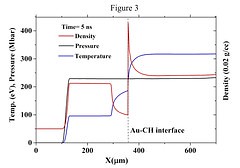 Conclusion
We studied the phenomena of density incrustation arising at the interface of low-Z CH and high-Z Au. This combination of materials is commonly used in ICF experiments. We generated EOS and opacity data for the materials using SBCRIS library and program package OPIND respectively. In this work, Au is maintained at a high temperature (~ 500 eV) which drives shock wave and Marshak wave into CH. At the same time rarefaction occurs in Au at the interface. Simultaneously, there is a sharp increase in the density of Au at the interface. This arises because of the difference in the spatial scales of hydrodynamic motion and radiation transport and different opacities of materials at the interface.
Our results exhibit features similar to that observed by Meng et-al 1. However, they considered Au plasma at a temperature of 1 keV in their simulations leading to a much higher magnitude of DI. We observed the physical phenomena albeit the magnitude was smaller. We conclude that the appearance of DI is definitely a physical phenomenon and not a numerical artifact but its magnitude strongly depends on the temperature of Au plasma. DI may increase Atwood number leading to growth of RT instability in the HED systems as observed by Meng et al. Hence we have to look for conditions that can possibly reduce the magnitude of the incrustation to as low as possible. Maintaining high Z plasmas at lower temperature (upto 500 eV) and keeping the low Z material at ambient density do lead to reduced incrustation at the interface and hence reduced growth rate of RT instabilities.