We have recently developed a kinetic neutral code for understanding the hydrogen neutral gas dynamics in the divertor region. The Linear Divertor Analysis with fluid model (LINDA) code [A] has been successfully coupled with Kinetic Monte-Carlo Neutral Code (KMNC) in the present study. This is the first attempt for the GAMMA 10/PDX detached plasmas to perform such a self-consistent and detailed analysis using the fluid plasma and kinetic neutral code. We then investigate numerically the plasma and neutral particles transport behavior at the end-cell of GAMMA 10/PDX. The simulation results clarified that hydrogen (H) neutral particles can effectively reduce the plasma energy and can generate the detached plasma by enhancing the ionization, the charge-exchange, and the recombination loss. The obtained knowledge from the study contributes to understanding the physical mechanism of plasma detachment operation by H neutral particles in the divertor region of the fusion devices.

Fusion reactors cannot be realized without reducing and/or controlling the heat and particle loads to the divertor plate by plasma detachment. Therefore, understanding of the plasma detachment mechanism and of roles/effects of neutral particles on the detachment processes are indispensable in order to realize the long pulse operation of fusion reactors. In particular, the impact of atomic and molecular processes on the detachment is an unsolved critical research issue. Linear plasma devices greatly contribute to revealing plasma physics because the linear device has a much more simple structure than tokamaks. The impact of H Gas-Puffing (GP) on the plasma parameters has been investigated in the divertor region of the linear plasma confinement device GAMMA 10/PDX [B]. However, the physical mechanism of plasma detachment and energy loss processes during plasma-neutral interactions have not yet been clarified so far. In particular, the impact of atomic and molecular processes of neutral particles on the energy loss processes has not yet been understood. Consequently, the numerical simulation research has been started in order to clarify unsolved physical issues noted above.

In this simulation, the LINDA code and the KMNC code have been numerically solved in the self-consistent manner. More specifically, plasma transport is defined by the fluid equations while the neutral particles are defined by the kinetic neutral code. The recycling and puffed neutral particles are considered as $H_2$. The test particles are puffed into the bulk plasma with the cosine distribution. By applying a newly developed integrated code, LINDA+KMNC, we found that neutral particles concentrate near the target plate and reduce towards the upstream region. It was also found that the ion temperature ($T_i$) is reduced in the vicinity of the target plate when H$_2$ Gas-Puff (GP) is performed. The plasma ion density ($n_i$) is also increased near the target plate by the GP. The charge-exchange (CX) loss and the momentum loss increase significantly near to the target plate when GP is performed, which induces a significant reduction in the $T_i$. Moreover, the $n_i$ is increased while electron temperature ($T_e$) is reduced by the ionization of neutral particles. At the higher neutral injection cases, $T_e$ is reduced to below the threshold of ionization potential. Consequently, the $n_i$ is reduced by the recombination. These simulation results may solve the critical issues such as the role of atomic processes on the energy loss processes and on the detached plasma formation. 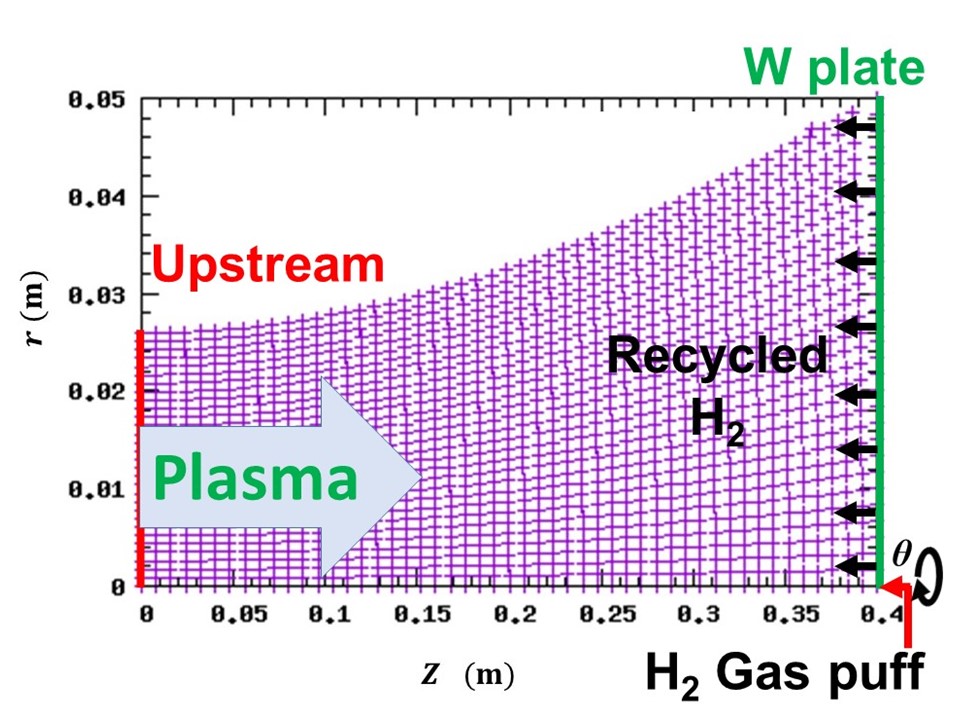 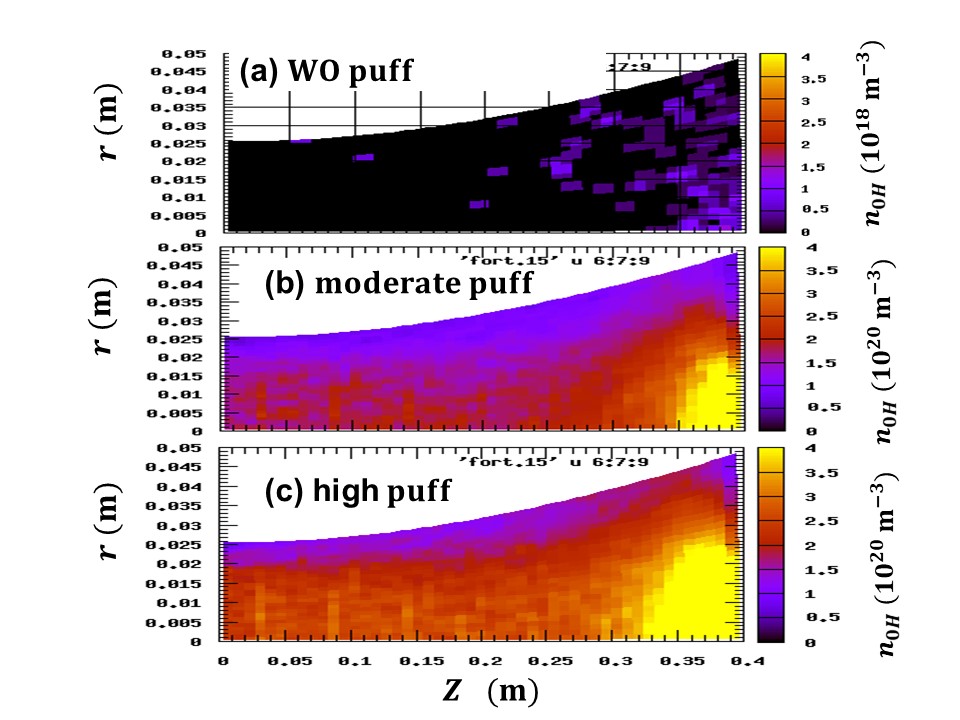 In the LINDA code, 2-D numerical grids have been created in the cylindrical coordinate system based on the axisymmetric condition. Figure 1 shows the mesh structure of the simulation region. A tungsten (W) target plate is designed at the end of the simulation space, as shown in Fig.1. Figure 2 shows the H neutral atom density ($n_{oH}$). For the case a (without GP), the neutral density comes from the recycling neutral particles and is shown to be very small. However, the $n_{oH}$ is enhanced significantly near the target plate when H$_2$ GP is performed as shown in Fig. 2(b)-(c). The $n_{oH}$ increases with increasing GP rate. 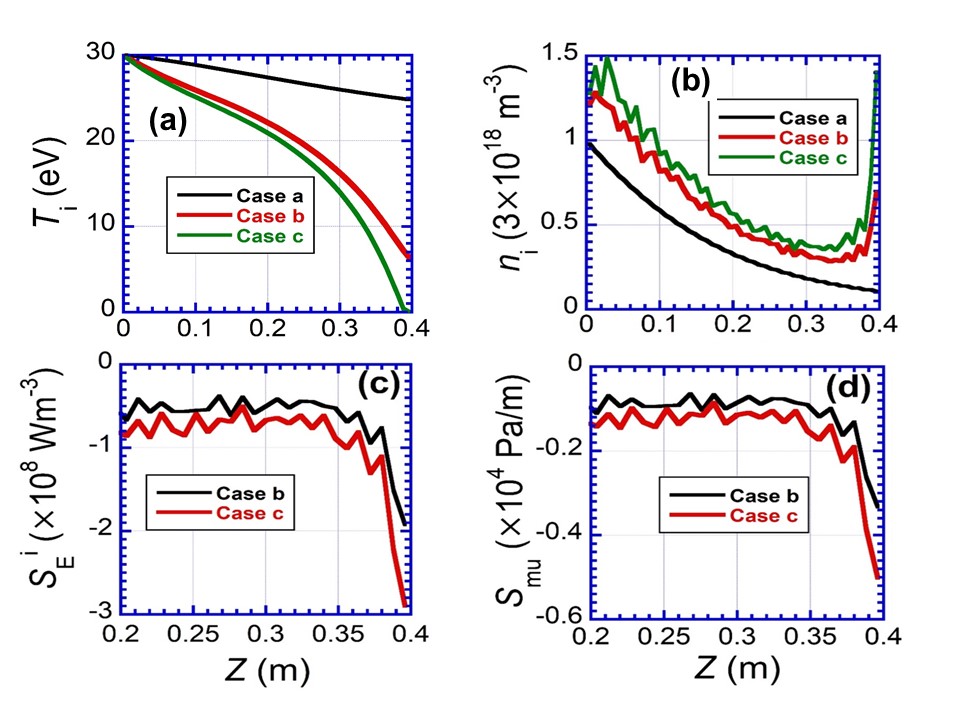 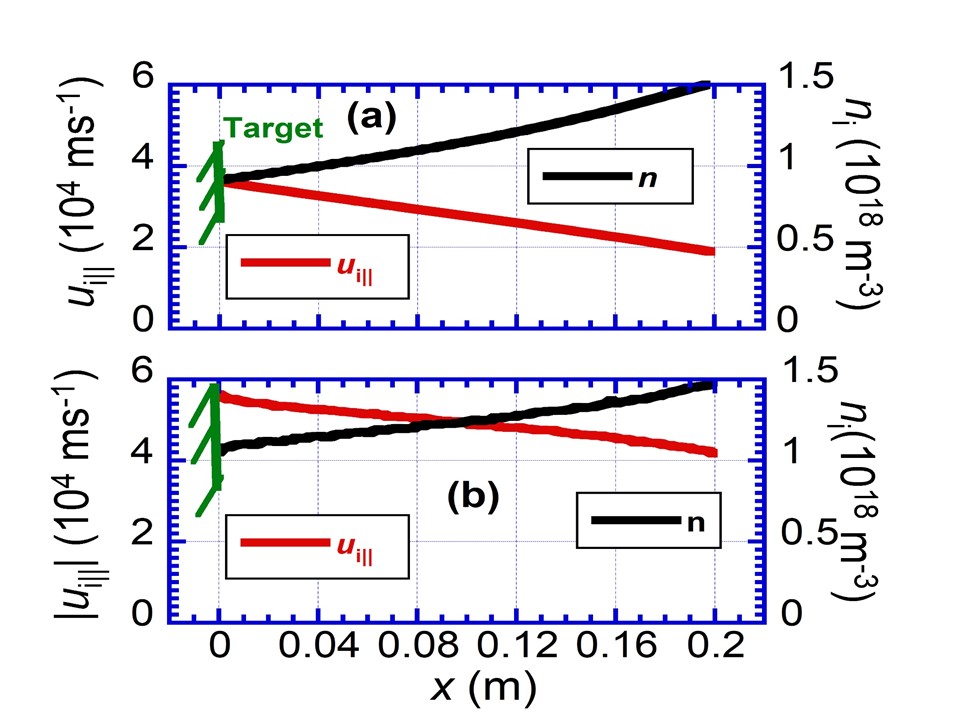 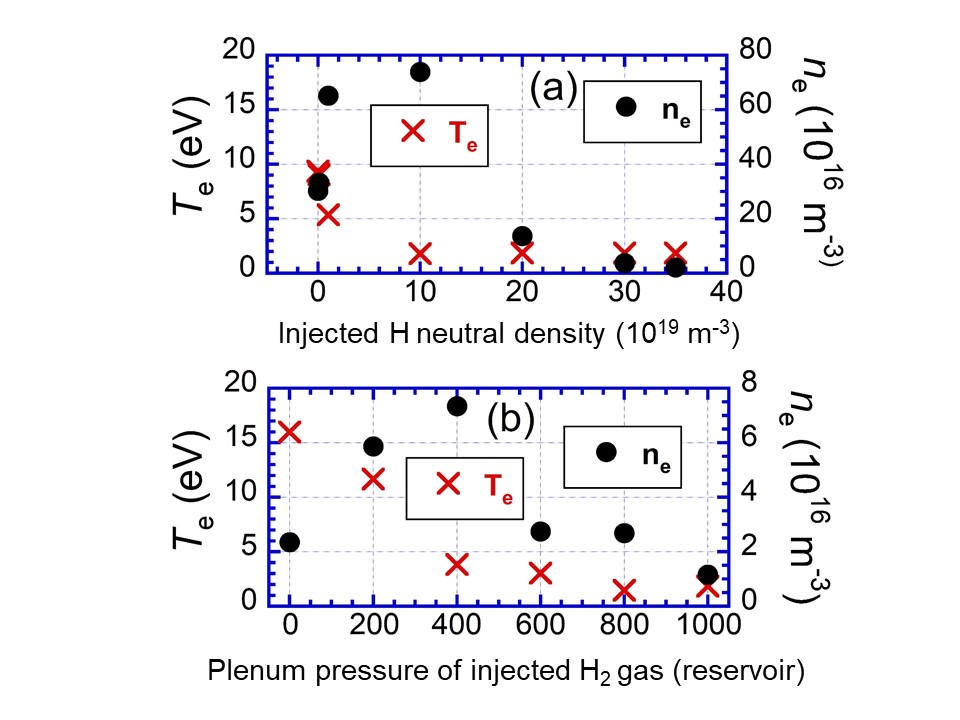