In the last few years it was demonstrated experimentally on tokamak ASDEX Upgrade that with a big amount of seeded radiant (nitrogen) the outer target fully detaches, and the high radiation zone appears in the confined region up to 10 cm above the X-point. The location of such a spot may be controlled in real time by variation of the impurity seeding rate [1]. Such regimes might be promising for the next generation tokamak-reactors, where it is necessary to reduce the power crossing the separatrix in order to keep divertor heat loads within applicable limits. Recently similar regimes were obtained in JET too both for nitrogen and neon [2,3]. 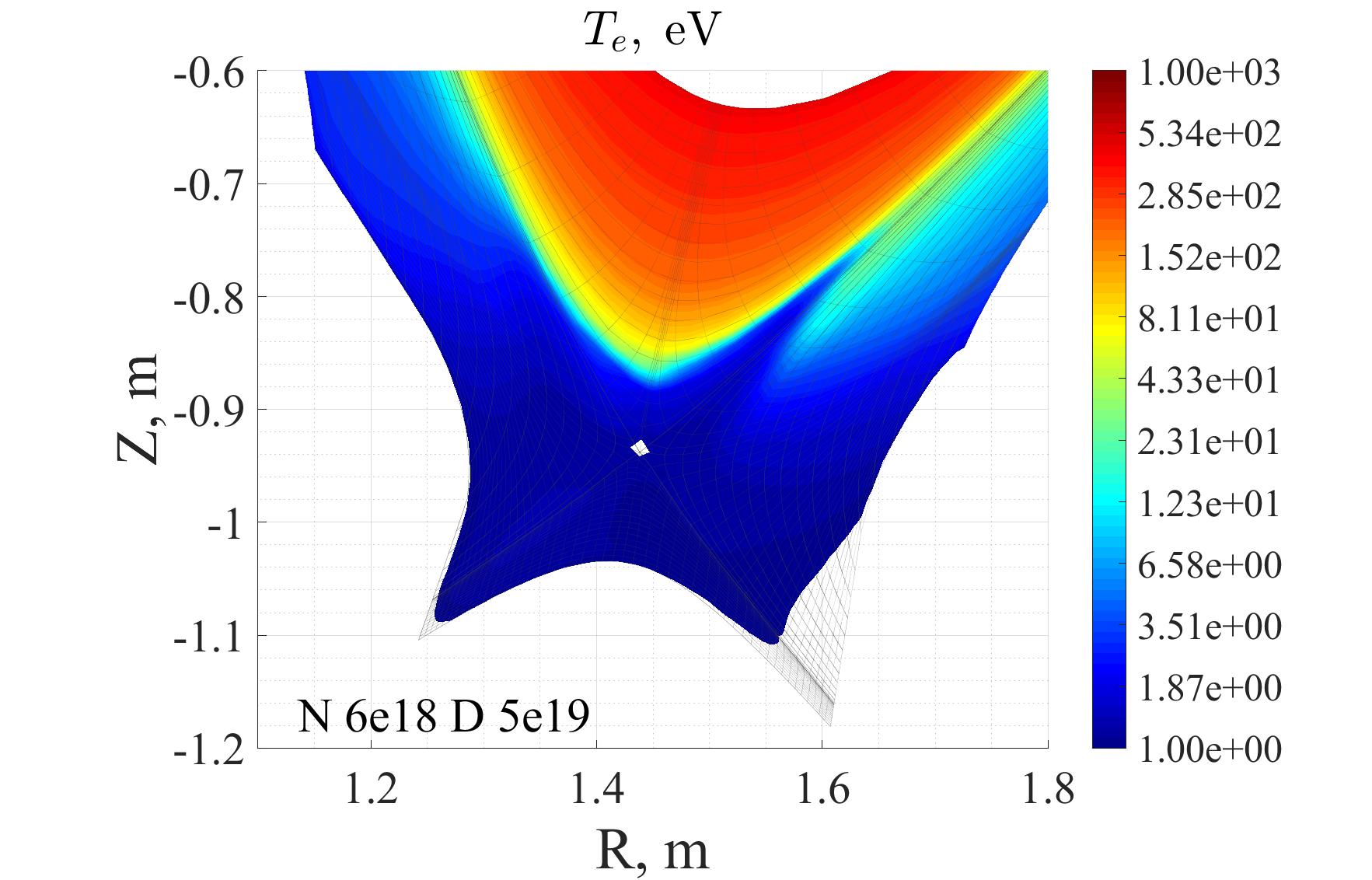 Attempts to reproduce such a radiative spot in the vicinity of the X-point with the SOLPS-ITER code modeling were not successful [4]: with a prescribed discharge power and an impurity seeding rate increasing no steady state solution could be found. Core plasma went into the radiative collapse in the modeling as impurity neutrals started to penetrate into the confined region near the X-point independently of how big the discharge power was. However, in the presented simulations it is demonstrated that stable solutions may be obtained if the number of particles in the system is fixed (or controlled by the feedback loops) and the temperature is prescribed rather than discharge power (i.e. if the different modeling strategy is used). Such solutions are analyzed in the present report.
In the SOLPS-ITER solutions the electron temperature falls down below the 5 eV in a wide (up to 15 cm in diameter) region above the X-point in the confined region (see Fig. 1) with a wide range of impurity content and discharge power – the more the amount of impurity in the system, the more power is required. If this region is mapped to the outer midplane (the OMP), its width is below 1 cm.
It is shown that this width is of the same order as the decay length of total energy flux through the flux surfaces in the confined region. The latter may be estimated from the assumption that the anomalous cross-field heat flux is turned into a parallel heat flux, which sinks above the X-point due to impurity radiation. Thus this decay length is of the order of $\lambda_q$ - the SOL width for the standard discharge with attached divertor – since approach to its estimate is the same. In extreme regimes with big amount of impurity the perturbed region becomes so wide that almost no energy flux reaches the separatrix: all available power is radiated from the cold region above the X-point. 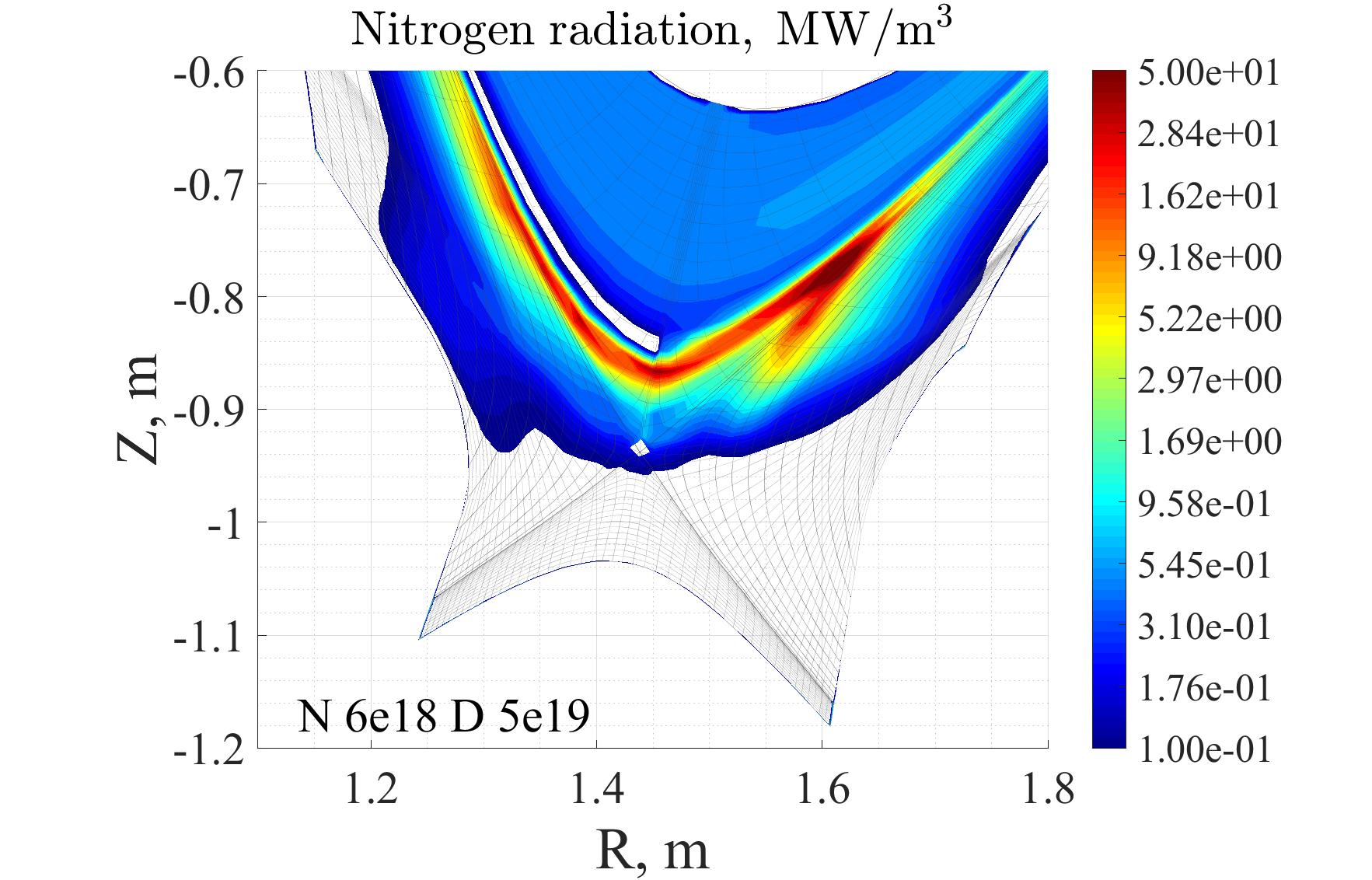 The maximal radiation comes from the poloidally narrow layer of $ L_{pol} \approx 1.5 – 2$ cm in width, where temperature falls down to 5 – 10 eV and where big amount of not fully striped impurity exists (see Fig 2). Thus the poloidal heat flux fully decays on the scale $L_{pol}$, and no more heat penetrates further downstream, and no radiation is possible from the X-point itself.

Important feature of the regimes with radiative X-point is that neither electron temperature nor electron density nor electrostatic potential (see Fig 3) are flux surface functions in the perturbed region. It is worth mentioning the formation of the electrostatic potential peak with $e\varphi \sim 25 T_e$. Thus the plasma flow in the pedestal region changes significantly with respect to the regimes with attached outer divertor, which leads to the changes in the radial E-field profile and might affect the level of the turbulence.