Scoping the possible operational regimes of a DEMO reactor requires reliable models of power exhaust processes. The scrape-off layer (SOL) and divertor in DEMO will need a higher radiated power fraction than present-day devices, and strong asymmetries in the SOL power fluxes entering the divertor regions may reduce the operational window in which the targets can be protected from excessive power loading. DEMO predictions will need to couple the transport and power dissipation in the SOL with the neutrals interaction in the divertor, which in practice requires using 2D plasma fluid codes. A bottleneck for the predictions are the long convergence times associated with the simulations, which is typically dealt with by performing various simplifications in the physics models used in the codes [1,2].

In 2D edge fluid codes such as SOLPS-ITER, the possible reductions in the physics models include using a fluid model for the neutrals instead of a kinetic model, bundling the charge states of the impurities, and neglecting the effects of cross-field drifts [2]. Both cross-field drifts and kinetic neutrals have been shown in past benchmarking efforts to be important for reproducing various divertor regimes in present-day devices, but including both models simultaneously in DEMO simulations would likely lead to convergence times of several months. Kinetic neutrals increase the credibility of modelling divertor detachment and radiation due to the fuel neutrals, but for modelling impurity radiation and the SOL power fluxes that enter the divertors, the drifts and the level of detail included in the impurity models could be equally or even more significant, depending on how strong the gradients in the DEMO edge plasma parameters are. As divertor detachment largely depends on the power and particle fluxes which enter the divertor, we have decided to focus first on the physics ingredients which impact these upstream conditions in a DEMO-relevant, highly radiative SOL. In this contribution, the significance of the various physics models are studied in DEMO simulations and benchmarked against selected experimental results obtained from present-day devices.

First predictions of drift effects in the EU-DEMO are emerging, and they are illustrated in Figure 1, which shows the power fluxes to the lower outer divertor modelled using SOLPS-ITER with a fluid neutral description for a symmetric double-null (DN) configuration. Both ExB and diamagnetic drifts are found to influence the solution by changing the in/out and the up/down asymmetries such that more power reaches the lower outer divertor. Although these results are obtained for an unseeded, attached scenario, our first results with Ar seeding indicate non-negligible effects of drifts in the radiated power fraction and in the power flux asymmetries also in conditions approaching detachment. Simulations with kinetic neutrals are planned as a next step to compare the significance of drift effects against that of a better neutral model.

Benchmarking the models used in DEMO predictions against experimental data is important in particular when a simplified physics set-up is used. The ASDEX Upgrade and JET tokamaks are both full-metal devices that allow disentangling the effects of seeded impurities from the intrisic impurities, which have low concentrations in the SOL. In this contribution we show comparisons of our simulations against low-density N-seeded L-mode experiments [3], which have the benefit that the effects of ELMs on both the measured signals and on the physical conditions in the SOL are avoided. In such plasmas, the drift effects are typically noticeable [3] but strongly recombining regimes are avoided, which supports benchmarking our upstream models but give less value for validating the predictions for the DEMO targets. To illustrate the possible effects of using reduced physics models in the simulations, Figure 2 shows SOLPS results for JET using fluid neutrals, bundled N impurities and de-activated drift terms similar to [2]. The reduced physics simulations are able to capture some trends observed in these experiment, such as the relative strengths of core and edge radiation and the reduction of the outer target power load by the seeding. However, the dependence on Zeff is not reproduced, which is at least partly due to the missing drift effects, as observed in simulations using the full-physics set-up [4].

Although a more complete picture of the importance of the various physics models for predicting radiation and power fluxes in the DEMO SOL is still being formed, our first results suggest that at least drift effects should be considered when modelling these processes, similar to the observations made when modelling present-day devices.

This work has received funding from the Academy of Finland (decision number 289726). This work has been carried out within the framework of the EUROfusion Consortium and has received funding from the Euratom research and training programme 2014-2018 and 2019-2020 under grant agreement No 633053. The views and opinions expressed herein do not necessarily reflect those of the European Commission. 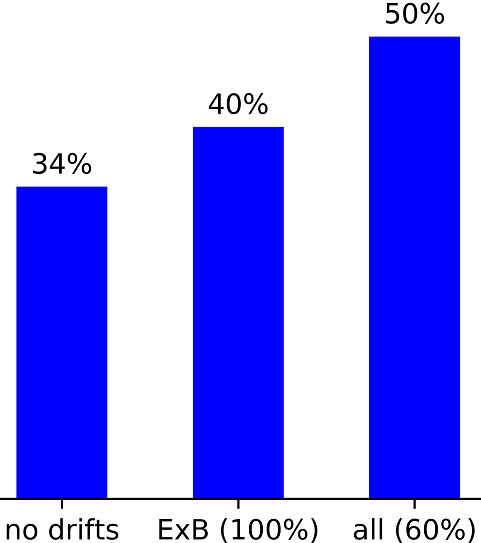 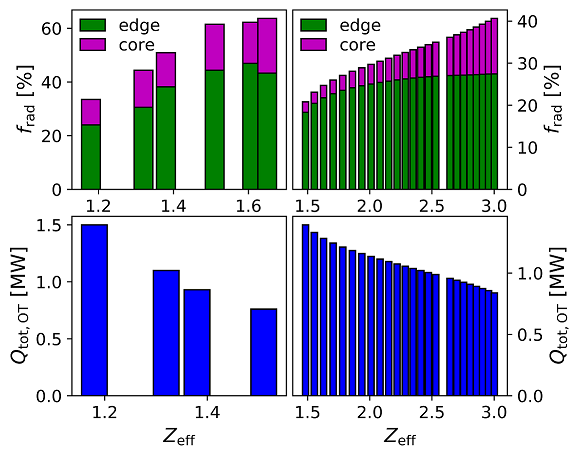