Implementation of suitable disruption mitigation technique remains the topmost priority for larger tokamaks including the ITER. The spontaneous disruption in ITER may probably be an unavoidable part, while operated with high performance D-T fuel [1]. Disruptions in ITER could produce very large heat loads on divertor targets and other Plasma Facing Components (PFC), and large electromagnetic forces on the Vacuum Vessel (VV) can lead to structural damages [2]. In order to avoid these detrimental consequences, disruption mitigation is an essential part of tokamak research. The disruption mitigation system (DMS) in ITER is based on massive gas injection (MGI) of impurities, in order to radiate the plasma stored energy and mitigate the potentially damaging effects of disruptions [3]. Although, MGI based technique is suitable for most disruption mitigation, there will be issues in case of having warning time less than 10 ms as may be the case for the onset of some disruptions in ITER [4]. This is due to the slow thermal velocity of the heavier impurity gas molecules, which limits the time needed to travel the distances before it reaches the plasma edge. At present, none of the currently planned disruption mitigations systems for ITER can respond on this time scale. The radiative dissipation of the plasma stored energy during major disruption in ITER by fast injection of massive pellets of low Z impurities, such as Li and Be pellet injection has been numerically modelled by Lukash et al. [5].

A novel concept of electromagnetically driven particle Injector (EPI) having fast time response has been developed and installed on the ADITYA-U tokamak. For the first time, ADITYA-U has experimentally demonstrated the use of electromagnetic pellet injection for firing the pellets into the tokamak plasmas for disruption mitigation studies. This is a significant development towards disruption control that can accomplish the critical need of disruption mitigation in future tokamaks including ITER. The experiments are conducted in ADITYA Upgrade (ADITYA-U), which is a medium sized (R0 = 75 cm, a= 25 cm) heated air core toroidal limiter tokamak, capable of producing circular as well as shaped plasma with single and double null open divertor configuration [6].

In these experiments, a projectile containing a radiative payload, weighing ~ 50 - 200 mg, is accelerated towards the core of the plasma with velocities of ~ 200-220 m/s using a linear coil gun accelerator, which can deposit micron-sized dust deep into the plasma core and radiate whole the plasma stored energy within few milliseconds. Lithium titanate (Li2TiO3) and Lithium carbonate (Li2CO3) particles of 50 – 80 micron are used in the experiments. Before performing the disruption mitigation experiment in ADITYA-U, the machine has been prepared for this experiment. The standard reference discharges of IP ~120 kA of 100 -120 ms duration have been established. Later, lithium titanate (Li2TiO3) impurity particles pellet has been injected into the ADITYA-U plasma during the plasma current flat-top at ~ 51.6 ms. The impurity particles reached the ADITYA-U core plasma within ~ 1.25 ms and causes fast termination of plasma current. The time evolution of two consecutive discharges of ADITYA-U, black curve (#33317) with particle injection and red curve (#33318) without pellet injection are shown in Figure 1, representing the radiative dissipation of the plasma stored energy in the discharge in which particles are injected. The spectroscopy measurements of Li line at 670.8 nm as shown in Fig. 2, confirms the signature of Li2TiO3 injection into the plasma. The chord averaged electron density and electron temperature, terminates very rapidly (Fig. 1(b) and 1(c) respectively), due to the increased of plasma radiation (Fig. 1(d)) after the impurity particles injections. The time evolution of relative intensity of visible radiation at 536 nm with and without particle injection for similar discharges during the disruption phase is shown in Figure 3. The Figure shows significant increase in the radiation level during disruption for the shot having particle injection.

During the experiment, fast visible imaging, high resolution video cameras on two different radial ports were installed on the ADITYA-U machine, to obtain the plasma images at high spatial and temporal resolution. One of the camera was kept for 2D tangential viewing, covers the entire cross-section of the limiter and the other camera covers the entire poloidal cross-section of the port, from where the impurity particles were injected into the plasma. The images clearly showed that the injected impurities radiate the energy from the core plasma and disrupted the whole plasma column within ~ < 2 ms. Furthermore, the disruptions triggered with particle injection using electromagnetically payload and disruptions triggered by massive gas-puff have been compared. Significantly different current quench characteristics have been observed in the disruptions triggered by particle injection, which occurred on faster time-scales as compared to those triggered by massive gas-injection. First results on disruptions in the ADITYA - U by electromagnetically driven fast injection of particles in to the plasma will be discussed in this paper. 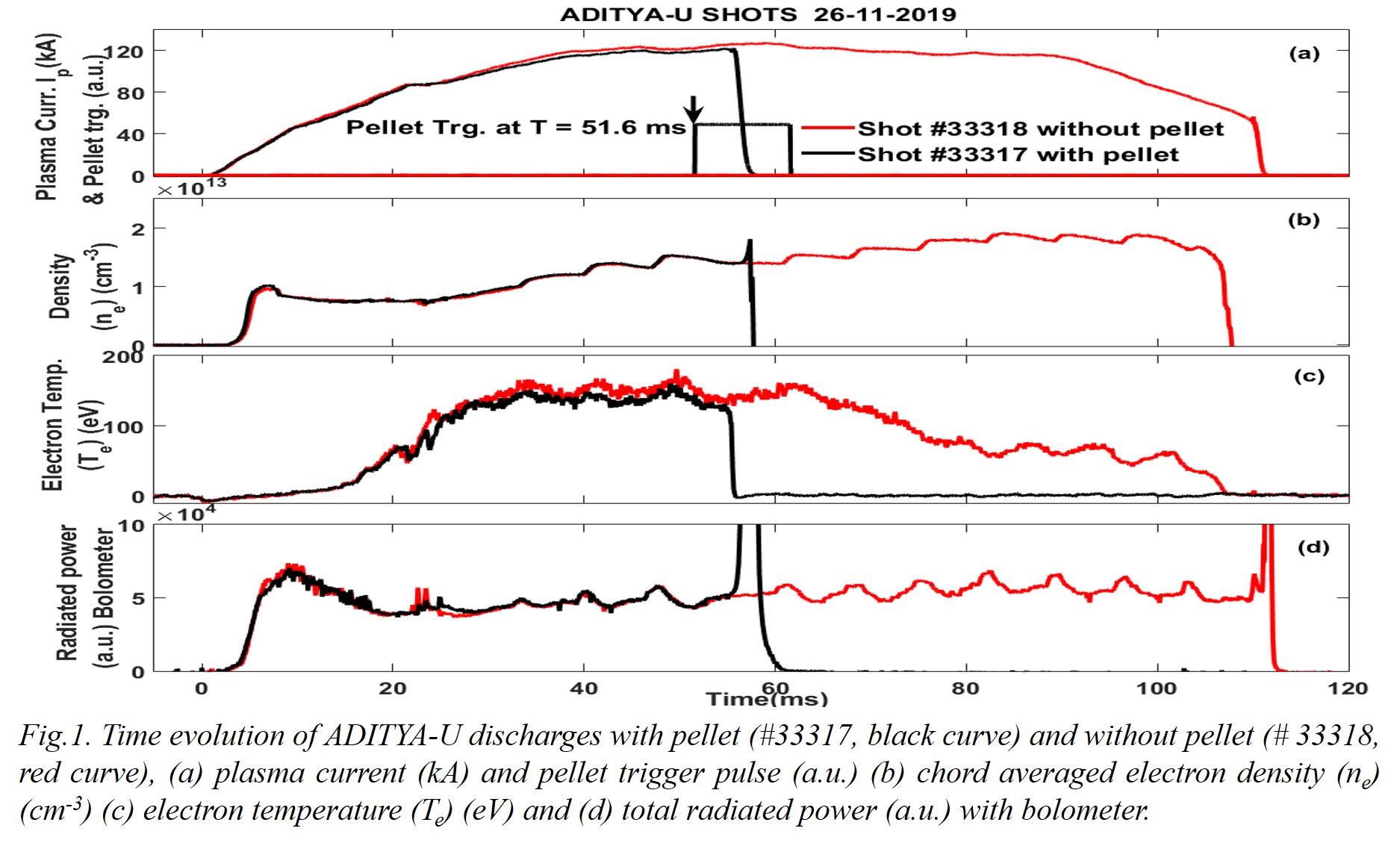 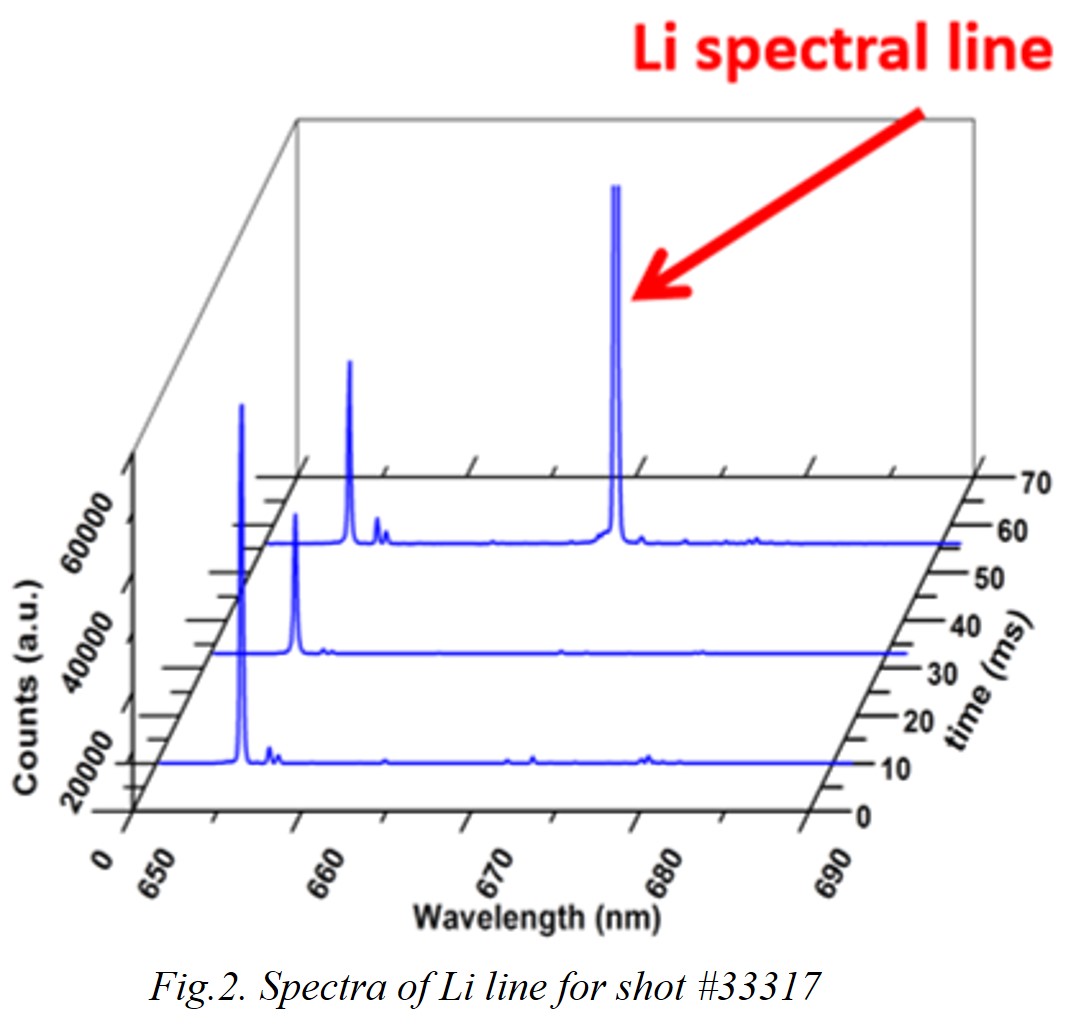 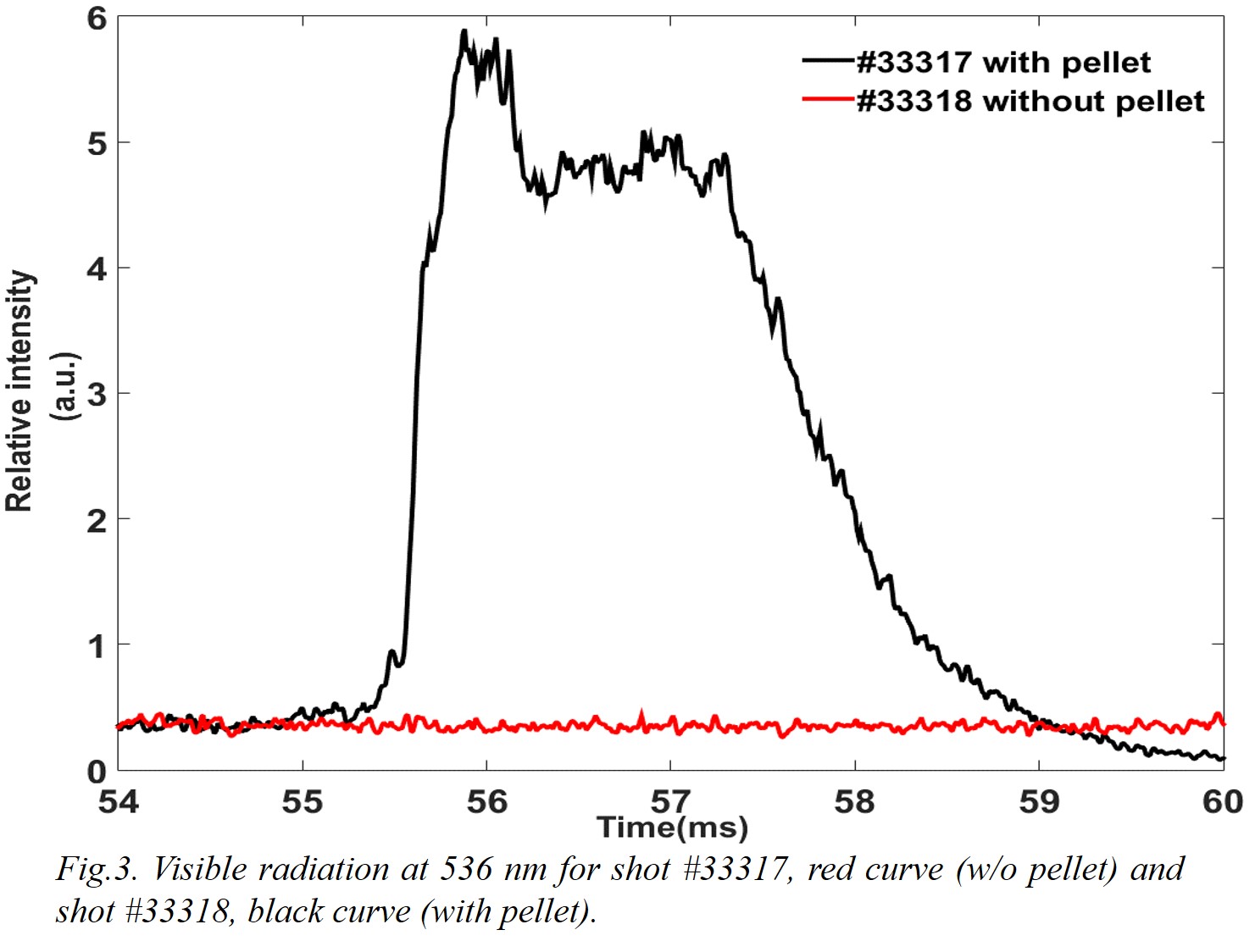