ADITYA tokamak has been upgraded to ADITYA-U tokamak which is equipped to have shaped plasma operations. The main structural modification is the replacement of an old rectangular cross-section vacuum vessel by a new circular cross-section vacuum vessel. New poloidal coils (six) have been installed in between new vessel and toroidal field coils [1]. Additionally, as per the design requirement, the in-vessel structure of graphite first wall material has been added more in upgrade tokamak for toroidal and poloidal limiters. Accordingly, the surface area of graphite (IG-430) has been increased > 2 m2. Thus the surface area of graphite as plasma-facing components (PFCs) is more than 11 % of the total in-vessel SS304L surface in ADITYA-U, while it was only 2.5 % in ADITYA. Due to graphite porosity, the fuel gases like Hydrogen and Helium retention stays potentially high due to wall conditioning procedures. As result, high Hydrogen recycling has been observed in tokamak plasma discharges mainly from graphite PFC, which disturbs the H2 gas fueling control. The carbon contain impurities are highly observed in ADITYA-U during wall conditioning procedures and tokamak plasma discharge in residual gas analyzer and spectroscopy diagnostics due to bulk graphite. To overcome these issues, different types of wall coating are carried out in fusion devices using low-z materials like lithium, boron, silicon to enhance plasma performance. Lithium coating on PFCs and vessel wall is a proven technique for controlling fuel recycling and high-z impurity in various fusion devices. A well-established technique in ADITYA, the lithium coating had been carried out using insertion of two lithium rods into the vessel during glow discharge wall conditioning (GDC) [2].This technique was effective in ADITYA due to less graphite PFCs compare to ADITYA-U. The same technique of Lithium coating hasn’t been successful in ADITYA-U, as very low Lithium-I line radiation is detected in spectroscopy diagnostics during tokamak plasma discharge after the coating. Thus, this Lithium coating is not effected in impurity control and Hydrogen recycling during plasma discharge. As per Carbon-III line radiation, the carbon burn-through period during plasma breakdown is significant high in ADITYA-U compare to ADITYA. Thus carbon impurity must be controlled in ADITYA-U using uniform and qualitative Lithium coating on PFCs.

Thus, we introduced and developed various Lithium wall conditioning techniques for ADITYA-U as (I) Heated Lithium rods insertion in H2-GDC (II) Lithium fueling by developed evaporator system (III) Combination of Lithium fueling and H2-GDC (IV) Combination of Ar-H2 mixture GDC then Lithium fueling and H2-GDC. The technique-I, an upgraded version of ADITYA Lithium coating, as Li-rod is heated by resistive heaters up to 130°C during H2-GDC (10-4Torr, 0.5-1.5A, 300-600V). The high temperature of Li-rod increases the Li- evaporation rate during GDC and we observed maximum 22000 counts of Li-I line spectrum in plasma shot no.33103 with single Li-rod. In fig.1, the effect of lithium coating is observed in the comparison of two plasma shots for ECR pre-ionization experiments with and without Lithium. The parameters in both shots are same as 100 kW ECR (42 GHz) power, low loop voltage 11V, TF 1.28 T, pressure: ~ 2 x 10-4 Torr. The major effect of Lithium wall conditioning is observed in the reduction of Carbon-III line and Visible Continuum as effective reduction of high Z impurity. As result, the plasma performance has been improved in current rise, long flat top and duration. The H-α and Oxygen-II are reduced in Li effected shot in the initial stage.

The physical vapor deposition in solid-angle of evaporated Lithium technique is widely used in other fusion devices. Here we have developed the technique-II of the Lithium evaporation system to control Li-fueling to ADITYA-U. The system has been tested up to 550° C on test-bench and installed successfully at ADITYA-U machine. The uniform and hard bonding of evaporated Lithium on PFCs in forms of Li2O, LiH, LiC qualify the Li-coating strength. In general, the Li counts have been decreased after each plasma shots in most of the tokamak experiments, which is main drawback of lithium coating. The Li mono-layers are inert for H2 molecules with physically deposited Li atoms, but Li is more reactive with H2 during GDC [3]. Thus in technique-III, Li-fueling plus H2-GDC creates more Li-H composition (lithium hydride) on the PFCs. The thermal decomposition temperature of Li-H is very high 688.7° C compare to Li melting temperature 180.5° C. As result, the Li wall conditioning effect sustains for long period of plasma operation compare to physically deposited Li atoms.

In technique-IV, this concept of Li-coating is novel for fusion machine. In ADITYA, the Ar-H2 mixture GDC had been carried out successfully to control Oxygen and Carbon contain impurity compare to traditional H2-GDC [4]. As observed in Ar-H2 GDC, the Oxygen and Carbon contained impurities like H2O, CO, CO2 are reduced more than 5 times within ten minutes compare to traditional H2 GDC. After Ar-H2 GDC, the Oxygen-contained impurities have been disappeared in near surface regions of PFCs and vessel wall for few hours. This phenomenon of Oxygen disappearance gives advantage to Li-coating. Therefore more Li-C and Li-H compositions are created on PFCs during Lithium fueling and H2-GDC, after Ar-H2 mixture GDC. The Pulsed GDC of H2, He, Ar-H2 mixture has been tested successfully in ADITYA-U for limited gas fueling with better wall conditioning [5].Therefore combination of all above techniques and pulsed GDC is also useful for better lithium coating. The design and development of all the techniques of lithium wall conditioning for ADITYA-U have been presented in this paper. The effect of various Lithium wall conditioning techniques on ADITYA-U plasma discharges has been studied in details using various diagnostics like visible spectroscopy, VUV spectroscopy for high-Z concentration, plasma parameters such as current, density, temperature, SOL probes for temperature and density, bolometer for radiation power [6]. 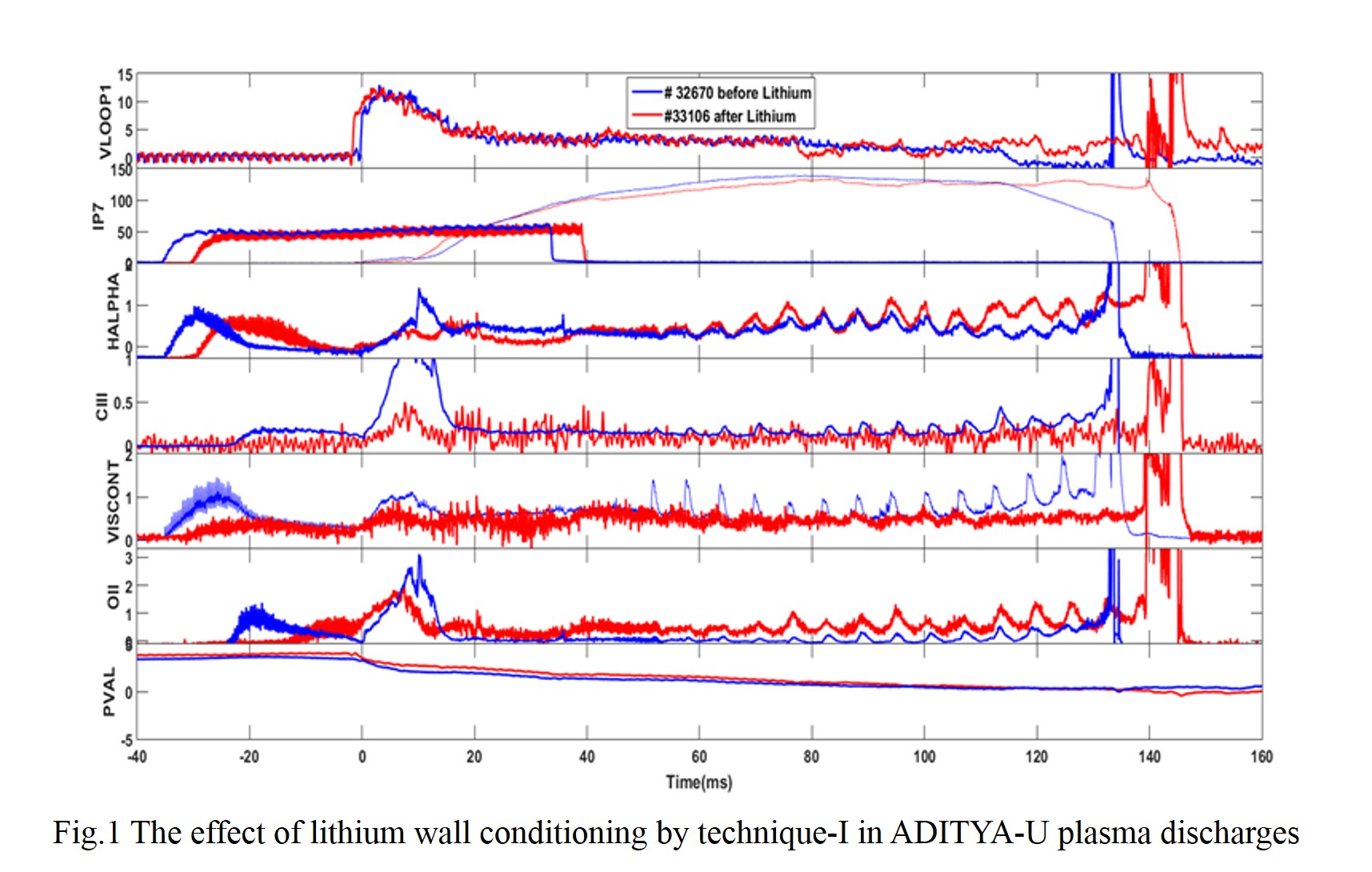