In this paper, we present the recent experimental results of cross phase influence on turbulent momentum and particle transport in the edge of HL-2A tokamak. The mathematical expressions for cross phases are derived in Fourier domain. The fluctuations and turbulent flux are measured by Langmuir probes. For Reynolds stress, prominent phase scattering in the strong shear layer is found, which indicates a phase slipping state as predicted by theory. With ECRH, the cross power is more concentrated in the high $ \gamma cos⁡(\varphi) $, which shows an agreement with the dynamics of spectral symmetry breaking in the development of poloidal torque. For particle flux, phase scattering increases with RMP, which could be induced by field line stochastisation due to magnetic flutter. Comparative statistical study shows that, fluctuations in particle flux exhibit a big deviation from Gaussian distribution, while fluctuations in Reynolds stress don’t. This suggests that edge transport models based on quasi-linear theory need to be reconsidered. This may be related to L-H transition physics. The cross phase dynamics may be also relevant to I-mode, which shows L-mode like density profiles, but H-mode like temperature profiles, with phase slipping in heat flux but locked in particle flux.

High confinement regimes are expected to be the operation scenarios of future fusion reactors such as ITER. A fundamental feature of these regimes in magnetic confinement devices is the formation of transport barriers, and the dramatically decreased turbulence transport. The primary physics involved in transport reduction is the effect of $ E\times B $ velocity shear owing to a decrease in the intensity of fluctuations, as well as the change in the cross phase between them $ {^1} $. The transient increase in $ E\times B $ sheared flows plays an important role in the L-H transition. The turbulent flux of momentum—Reynolds stress—is a mechanism thought to be responsible for the generation of sheared flow driven by turbulence $ {^2} $. Reynolds stress and fluxes are sensitive to cross phase. However, usual quasilinear theory does not treat phase as dynamic. Study of cross phase influence on turbulent transport and the interaction between sheared flow and cross phase, is significant for understanding the high confinement regimes. 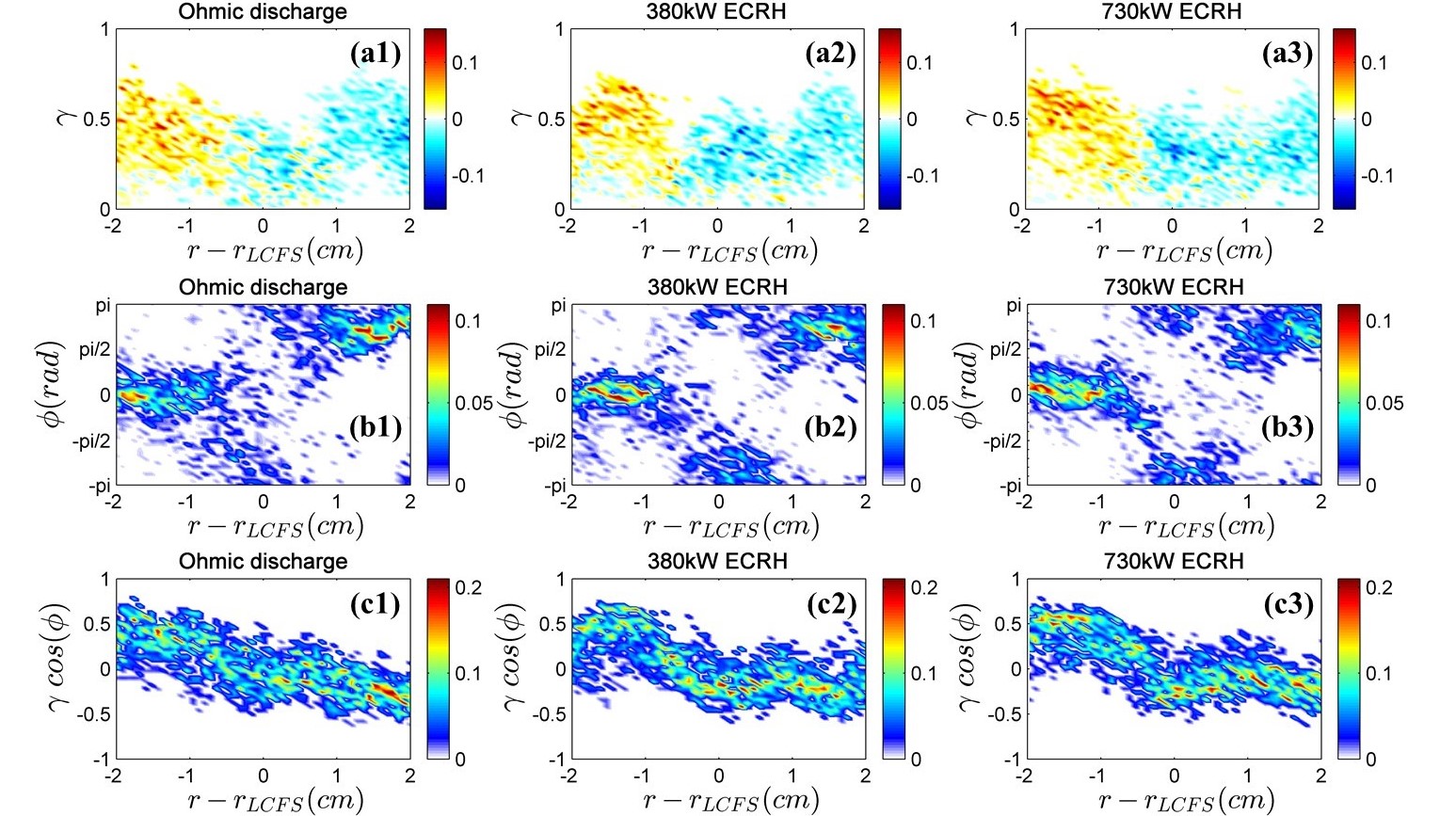 Figure 1 shows the cross phase evolution of Reynold stress in Ohmic and ECRH heated L-mode discharges. Figure 1(a1-a3) show the normalized cross power profile between $ \tilde{v }_r $ and $ \tilde{v }_\theta $, and its distribution on coherence $ \gamma $. $ \gamma $ drops in the strong shear layer near [-1,1] cm. This shows the turbulence decorrelation by the sheared flow. Figure 1(b1-b3) show the normalized cross power distribution on cross phase angle $ \varphi $. The phase scattering in the strong shear layer is larger than other regions. The phase angle tends to distribute in [-$ \pi $/2,$ \pi $/2] at [-2,-1] cm, and [$ \pi $/2,$ \pi $] at [1,2] cm. This is consistent with a novel theory, which indicates two different states of the cross phase: slipping in strong shear regimes and locked in weak shear regimes $ {^3} $. Figure 1(c1-c3) show the cross power distribution on X factor $ \gamma cos⁡(\varphi) $. X factor changes from negative to positive from SOL to edge. With ECRH, the cross power is more concentrated in the high X factor region. This exhibits good agreement with the dynamics of spectral symmetry breaking in the development of poloidal torque $ {^4} $.