Pedestal formed in the plasma edge of high confinement mode (H-mode) strongly affects edge localized modes (ELMs) burst. Thus, understanding the physics of the pedestal instabilities is key to reducing the uncertainties associated with the realization of burning plasma conditions and the appropriate control of ELMs. Fusion power depends strongly on the pedestal pressure. RF waves, such as electron cyclotron wave (ECW) and lower hybrid wave (LHW), have obvious effects on the increase of plasma pressure. It was observed that the change of ELM frequency by ECRH is owing to its role in modifying the edge pressure profile rather than driving the edge plasma current $[1]$. However, there is no clear evidence to explain the decrease of the pressure gradient and the increasing population of the higher ELM frequency band $[2]$. In this work, comparative studies of the impact of ECRH and LHW on pedestal instabilities in the type-I ELMy H-mode discharges are carried out in HL-2A. 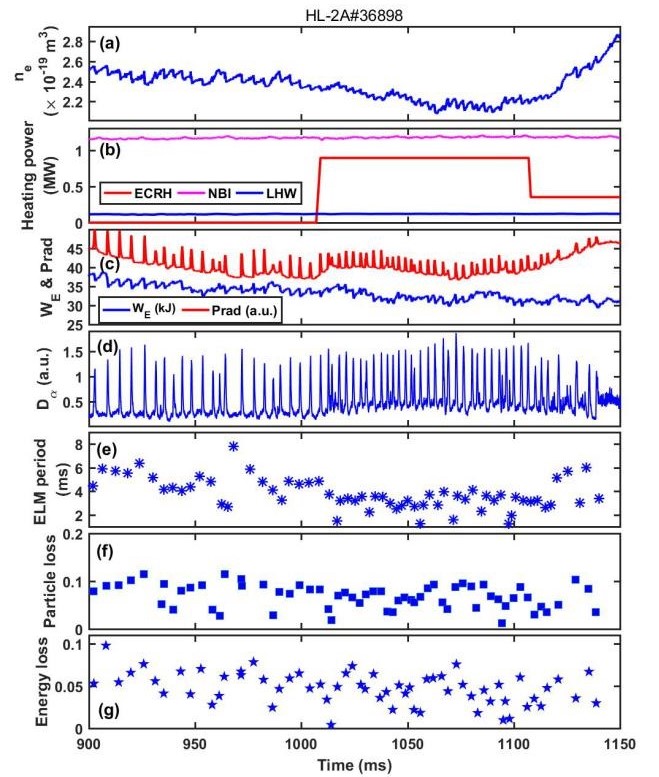 For the H-mode plasmas with ECRH, the ELM behaviors change accordingly. Fig. 1. illustrates the typical characteristics of type-I ELM, where the frequency increases with the heating power. In this shot, the power of ECRH is deposited around r = 25 cm. The ECW was perpendicularly injected into the plasma from low field side (LFS). Plasma radiation power increases lightly in the front part of ECW injection. The particle loss and energy loss keep almost constant for the periods with and without ECRH. To study the impact of ECRH on ELMs, the power deposition location was scanned by changing the toroidal filed (B$_{t}$). The ECRH heating powers are almost identical (0.5~0.6 MW) and the ELM periods are about 6 ms without ECRH. However, it decreases from 4.5 ms to 2.7 ms with ECRH power deposition location moving from plasma core region (r/a = 0.35) to edge region (r/a = 0.8). The result suggests that edge ECRH makes it easier to ELM burst earlier. 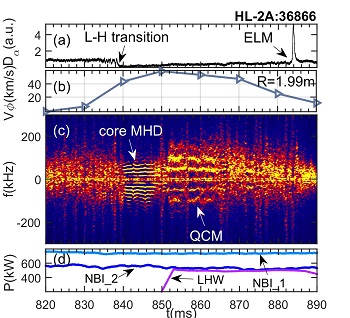 For the H-mode plasmas with LHW, a pedestal instability quasi-coherent mode (QCM) has been observed after the L-H transition and before the first ELM burst. It was located in pedestal region of the type-I ELMy H-mode. The characteristic frequency of QCM gradually decreases from 50 kHz to nearly 20 kHz before the first ELM, as shown in Fig. 2. At 850 ms when the LHW heating was switched on, the core MHD in Fig. 2 (c) disappeared and the QCM was excited at the same time. Signals of divertor probes illustrate that the particle transport was gradually enhanced during the occurrence of the QCM. The radial wave number of QCM is k$_r$ ~ 0.8 cm$^{-1}$ and it is radially propagating outward. Besides, the poloidal wave number is k$_{\theta}$ ~ 1.4 cm$^{-1}$ and propagates in electron diamagnetic direction. The occurrence and evolution of QCM is strongly associated with the pedestal dynamics and ELM activities, which could be externally controlled by LHW and ECRH. 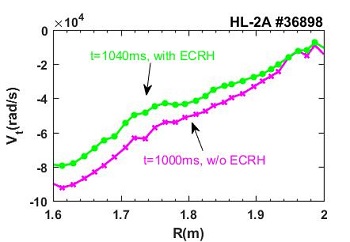 In order to study the physical mechanism of QCM occurrence and ELM behavior changes, edge plasma parameters are measured, in which the toroidal rotation plays a key role. For QCM, it has been observed that the characteristic frequency is linear proportional to the toroidal angular rotation frequency. The rotation can be affected by LHW and ECRH. For instance, ECRH decreases the plasma rotation not only in the central region but also in the edge region as shown in Fig.3, in which two time slices before and after ECRH switch-on are compared. The theoretical work predicted that the sheared toroidal rotation can reduce the growth rate of the high n modes $[3]$. The results in HL-2A indicate that the reduction of co-current toroidal rotation increases the ELM frequency. As the shear of the plasma rotation has a stabilizing effect on MHD modes, the reduced V$_t$ and softened rotation shear might have destabilized effect on ELMs. More details on the relations among QCM, ELMs and pedestal structure will be illustrated, and its simulation results will also be presented.