Recent experiments at the JET tokamak with ITER-Like-Wall studied intrinsic rotation in a large tokamak, addressing questions related to the effects of collisionality and hydrogen isotope type on the amplitude of the measured toroidal rotation and rotation reversals of Ohmic plasmas. The isotope effect on the intrinsic rotation was investigated by comparing the rotation of the main ion in Hydrogen (H) and Deuterium (D) discharges. In order to assess the influence of machine size the JET studies were complemented by identity experiments performed at the DIII-D tokamak, providing a direct comparison of JET intrinsic rotation data with that of a medium size tokamak.

Increasing rotation shear in the plasma core is valuable for increasing thermal confinement, and yet what determines the shape of the rotation profile remains unclear. JET experiments studied the effect of density on the shape of the core rotation profiles of Ohmic divertor plasmas. Density scans in both H and D were performed at JET for the study of rotation reversals, in low triangularity configurations with $\mathrm{B}_{\mathrm{T}}=2.7\,\mathrm{T}$ in two different plasma currents ($\mathrm{I}_{\mathrm{p}}=1.7\, \mathrm{MA}$ and $2.3\,\mathrm{MA}$) and, in plasmas with a lower toroidal field, $\mathrm{B}_{\mathrm{T}}=1\,\mathrm{T}$, $\mathrm{I}_{\mathrm{p}}=0.9\,\mathrm{MA}$. The latter, were JET pulses for a JET-DIII-D identity experiment. The toroidal rotation of the main ion was measured from $\mathrm{H}_{\alpha}$ or $\mathrm{D}_{\alpha}$ charge exchange spectrum obtained during short bursts of Neutral Beam Injection (NBI).

At JET, as the density increased, two consecutive core rotation reversals (where the gradient of rotation changes sign in the middle of the plasma) were observed (Figures 1 (a) and (b)). At low densities co-current rotation decreased with a reversal on the core from peaked to hollow profiles. Further increasing the density leads to restoration of monotonic profiles, co-rotation now increasing as a function of density. Although rotation reversals in Ohmic plasmas have been a common observation in small and medium size tokamaks {1}, the JET experiments described here, were the first clear observation of rotation reversals in a large tokamak. 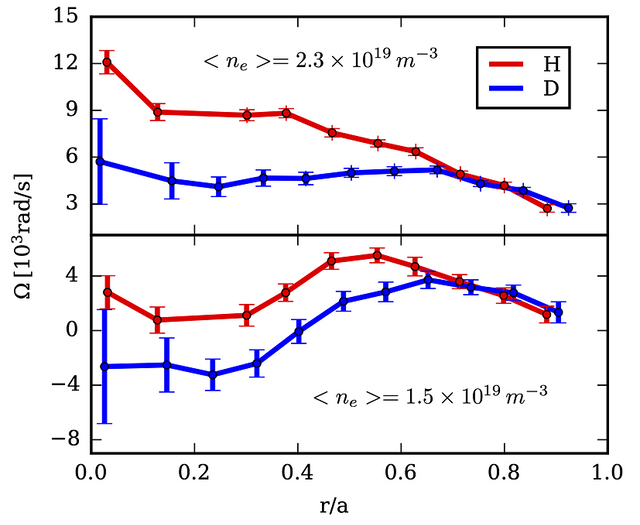 An important question, for reliable rotation prediction for ITER, is whether changes in the core rotation shear, thought to be a result of turbulent transport, depend on machine size and if it will scale into a significant effect in ITER. In order to investigate how machine size can affect the magnitudes of intrinsic rotation and rotation shear, a JET-DIII-D identity experiment was performed at JET and DIII-D. Rotation was measured in DIII-D plasmas {2} that matched the JET plasma shape, $\mathrm{q}_{95}$ and other dimensionless parameters thought to be key for intrinsic rotation and intrinsic rotation reversals, such as the normalized gyro-radius, collision frequency and plasma pressure. Rotation reversals as a function of density were also observed in DIII-D. Both rotation reversals occur at lower densities in JET. Extrapolation to a larger machine such as ITER implies that intrinsic rotation profiles are likely to be in the peaked co-current rotating regime at the densities anticipated.

In JET and DIII-D the low density rotation reversal was observed near the transition from the linear to the saturated Ohmic confinement regime (Fig. 3). Linear gyro-kinetic calculations, with codes TGLF and GS2, show that in both JET and DIII-D the low density rotation reversal occurs close to the density of transition from dominant TEM to ITG instabilities. However, from JET data where a clear high density branch with peaked rotation profiles was observed, it is concluded that the instability type would not explain the rotation peaking at higher densities, since both hollow and peaked profiles are observed with dominant ITG.

Comparisons between intrinsic rotation data and ongoing turbulent momentum transport calculations have been performed. Non-linear calculations with the low-flow model in GS2 {3} show changes of sign in rotation gradient, consistent with the observation of peaked to hollow to peaked profiles as the density increased, though the modelled rotation shear is lower than that measured. 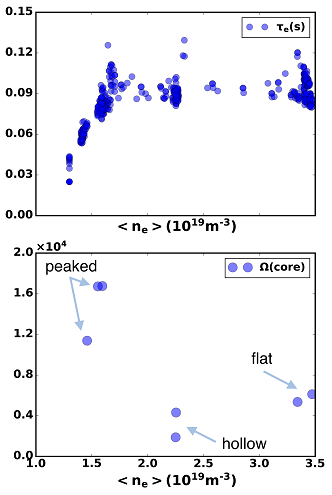 Acknowledgments
This work has been carried out within the framework of the EUROfusion Consortium and has received funding from the Euratom research and training programme 2014-2018 under grant agreement No 633053. In addition, it has received financial support from Fundacao para a Ciencia e Tecnologia through contracts UID/FIS/50010/2013, IF/00483/2014/CP1214/CT0008 and grant PD/BD/105877/2014. The views and opinions expressed herein do not necessarily reflect those of the European Commission. The work was supported by US DOE under contracts DE-FC02-04ER54698 and DE-AC02-09CH11466. The views and opinions of authors expressed herein do not necessarily state or reflect those of the United States Government or any agency thereof.