To verify the CarMa0NL modelling for COMPASS-U, the numerical results are cross-validated with general analytical predictions [Pustovitov V. D., Nuclear Fusion 55 113032 (2015)]: the computed vertical force on the tokamak wall is found to be almost zero during fast transients, as it should be. This test proves the credibility of the model and computational method. The role of poloidal eddy current (which is absent in some approaches) in the dynamics of radial force on vacuum chamber is found to be essential. This justifies the choice of CarMa0NL, which additionally is able to describe real 3D geometry of the conducting structures, as a primary tool for disruption studies for COMPASS-U.

Strong electromagnetic loads on tokamak vacuum vessel and in-vessel components ('wall') caused by an abrupt termination of plasma discharge must be modelled thoroughly to guarantee structural integrity of future fusion reactors. In the absence of a predictive theory for plasma behavior during disruptions, the design of tokamak chambers still remains a challenging task. Recently some general rules [1] have been established in theory that allow to test the credibility of modelling. The present study aims to verify these rules numerically for the wall configuration with passive stabilizing plates (PSPs) to complement the similar analysis performed for the wall without PSPs [2].

Many tokamaks, specifically AUG, COMPASS-U, DTT, EAST, JT-60SA, KSTAR and WEST employ PSPs to improve vertical stability of elongated plasmas. Hereinafter, we scrutinize the COMPASS-U, which is a high-field tokamak presently in the final design phase. It will operate at the toroidal magnetic field, plasma current and elongation up to $B=5\ T$, $I=2\ MA$ and $\kappa = 1.8$, respectively. The upper (UP) and lower plate (LP) are placed inside the vacuum vessel (VV) as shown in Fig. 1 (a). The resistive decay time for toroidal current induced in these copper PSPs is $\tau_{psp}=66~ms$, which is 22 times larger than the same value for VV made of Inconel ($\tau_{vv}^{tor}=3~ms$). This complicates electromagnetic and mechanical analysis of the wall response. We study a number of different disruption scenarios with CarMa0NL [3] to understand the dynamics of electromagnetic loads on the wall. Preliminary results presented in Fig. 1 confirm analytical predictions [1] for the COMPASS-U setup with PSPs: the total vertical force on the wall is zero for fast transients.

Until now, the largest forces on the COMPASS-U wall have been found for slow vertical displacement events (VDEs), such as shown in Fig. 2. However, to increase the credibility of numerical predictions we cross-validate our results with analytics [1] for the limit case of fast transients. 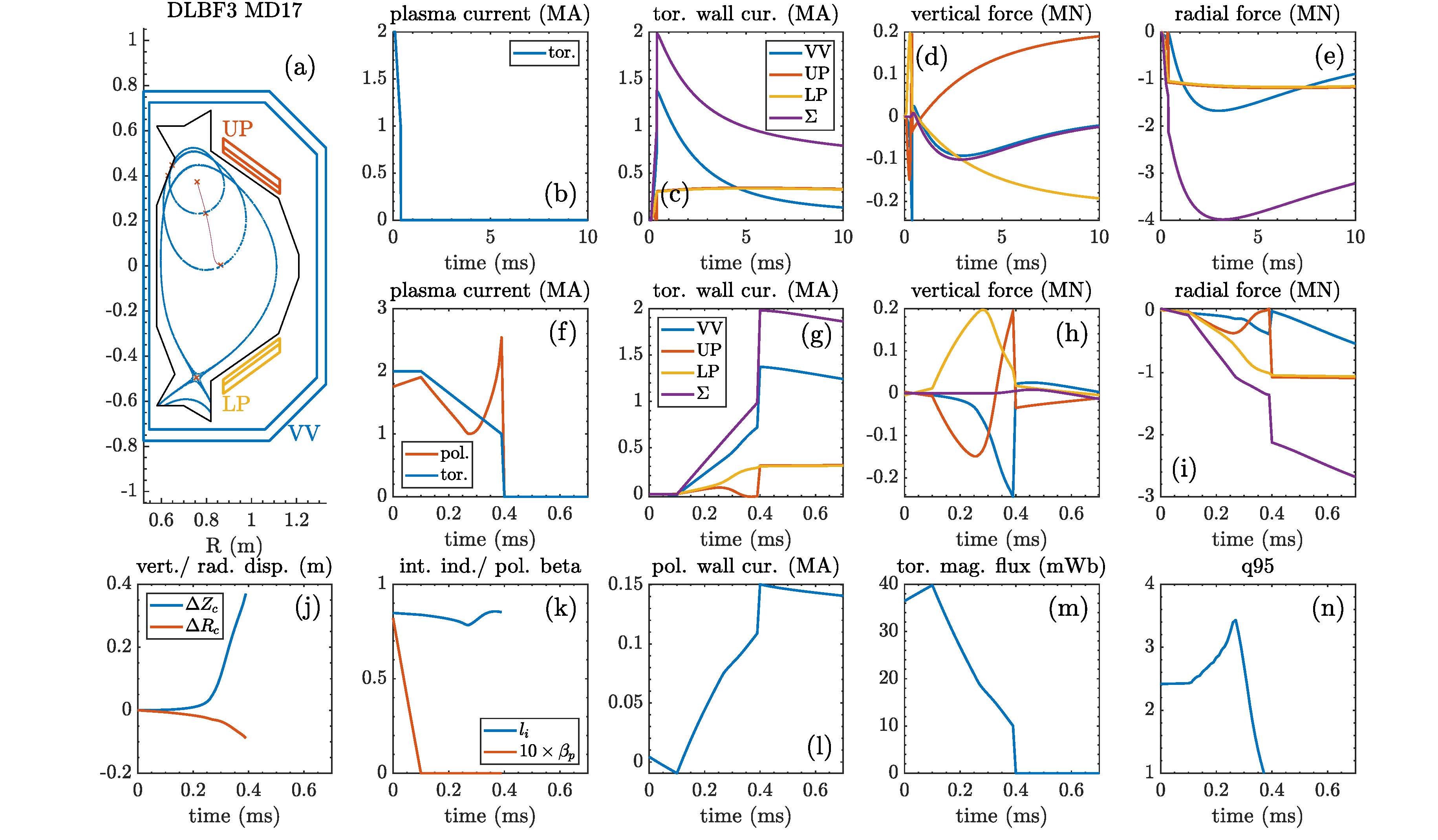 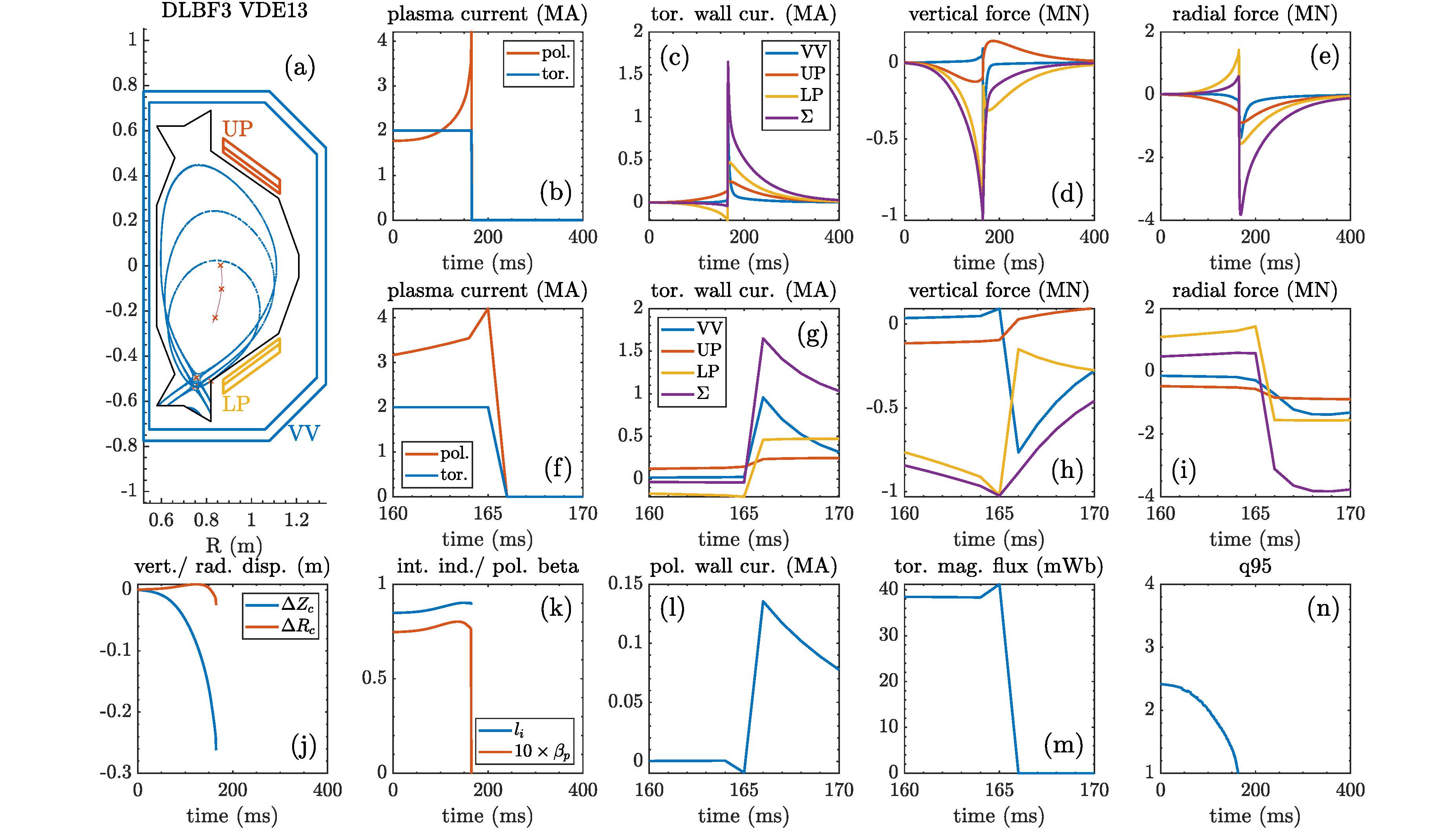