The report presents the results of the design development of the equatorial diagnostic port #11 of the final project level and the upper diagnostic ports ## 02,07,08 of the preliminary design level. Ports are being developed at the Budker Institute of Nuclear Physics of the Siberian Branch of the Russian Academy of Sciences (BINP SB RAS or shot BINP) in close cooperation with the ITER central team in the framework of port standardization (DP-IPT). The second part of the report is devoted to the preparation of technological processes for the manufacture and assembly of diagnostic ports at the port integrator site.
The diagnostic ports integrated by BINP, both upper and equatorial, are made according to a single unified principle - modular design. In-vessel part of the diagnostic ports consists of the following main components: diagnostic first wall (DFW), diagnostic shielding module (DSM) port plug structure (PPS) (see Figure 1). 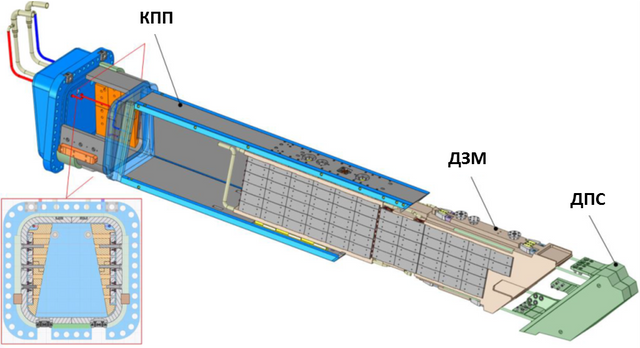 These components are manufactured by different manufacturers and subsequently assembled together at the port integrator site at BINP. The diagnostic shielding modules manufacturing is under responsibility of the port integrator, the other two components are developed and supplied by a central team.
The basis of the DSM design is a metal c-shaped frame, which provides the transfer of forces from the DFW to the PPS. This design allows to provide the 1necessary rigidity and structural integrity independent of the internal location of the diagnostics (see figure 2,3). The space around the diagnostics is filled with a shielding trays consisting of a stainless-steel tray and a boron carbide ceramic bricks. Since the shielding trays are standardized and have a discrete step, there are significant gaps between the diagnostics and shielding trays. To eliminate these gaps, a stainless-steel blocks (backfilling) are used that are installed on the DSM and fill this empty space as much as possible (see Figures 2,3). 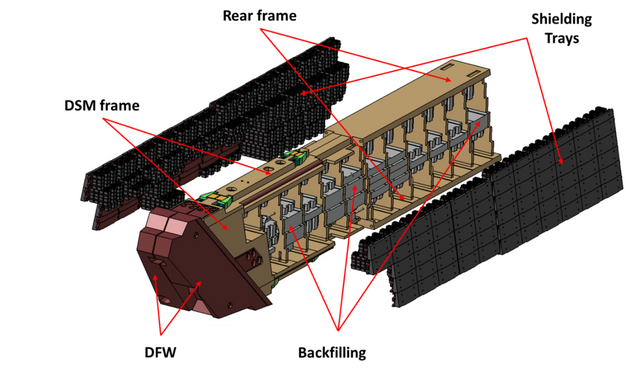 Such a constructive solution allows to have a very flexible system that allows, on the one hand, the ability to provide the necessary cutouts for lines of sight and diagnostic equipment inside the DSM, on the other hand, to ensure the strength of the DSM design independent of these cuts.
The big advantage of using a standardized approach to the design of a port plugs allows to use the same technological and assembly solutions for all ports, which significantly reduces the cost and time of production preparation for manufacturers with more than one port.
As part of the preparation for the production of diagnostic port components, a series of technological studies (R&D) was carried out (both at the BINP and the ITER central team) on the possibility of using the proposed technologies for the manufacture of components. A technology of a neutron protection from boron carbide has been developed. It was shown, as a result of a set of tests (including gas separation measurement), that boron carbide is a suitable material for ITER and can be placed in a vacuum vessel in large volumes (tons). A typical cooling system has been developed for DSM of the equatorial and upper ports. A prototyping of complicated places was carried out, including the manufacture of a gun-drilling channels, welding of blind holes and long welds on water channels.

The results of these technological studies were presented in the form of reports about the study and are stored in the ITER database. In the future, all these technological developments can be used by other ITER members for the technological substantiation of the design and preparation of the production of DSMs.
The next key point in preparing the integration of ITER diagnostic ports is the preparation of an assembly hall on the territory of the BINP. The complexity of creating an assembly hall for diagnostic ports lies in the aggregate of key requirements for technological processes, in dimensions and masses of assembled products, as well as in the place of production of various components.
The main technological requirements are compliance with the cleanliness of the premises according to the requirements of the first class of cleanliness according to RCC-MR during all assembly operations and testing, plus a carry outing of an acceptance tests in a clean room. The critical restrictions on the creation of the assembly hall are the mass of the equatorial port plug 48 tons and the length of the upper port plug (about 6 meters). To assemble the upper port plug, the necessary space under the crane hook should be at least 13 meters. Due to the presence of a large number of different components from different manufacturers (DFW, PPS, diagnostic components) that are delivered at different times, it is necessary to provide for the possibility of transportation and storage of all delivered components in a clean room of the assembly site, regardless of the stage of work on it.
As part of the preparation for assembly operations of large-sized products (diagnostic port plugs), a unique assembly hall was developed and created a unique complex of an integration hall.
The report gives a detailed data of the progress of work in a preparation for the integration of diagnostic ports on the territory of the BINP SB RAS.