The National Institutes for Quantum and Radiological Science and Technology (QST) is constructing a superconducting tokamak JT-60SA at Naka Fusion Institute in Japan under an international collaboration between Japan and the European Union. To cool the superconducting magnets (total 650 tonnes), the thermal shields (100 tonnes), and the cryopumps (1.3 tonnes) and to supply cold gas for the High-Temperature Superconducting Current Leads (HTS-CL), a cryogenic system with an equivalent refrigeration capacity of 9 kW at 4.5 K has been provided as a French contribution to the project. To induce plasma currents and control the plasma shape and position, equilibrium field (EF) coils and Central Solenoid (CS) provide variable magnetic field flux to the plasma. The cryogenic heat load generated in the magnets varies significantly during the plasma experiment. The variation of the heat load leads to rapid changes in the cold return flow to the Refrigeration Cold Box (RCB), which has to be balanced by the compressors and turbines. The stationary 4 K heat load of 2.3 kW quickly reaches 7.4 kW during dynamic magnet operation. One of the design challenges for the cryogenic system was to mitigate the impact of the heat load fluctuation using a thermal damper with a dedicated active control system. 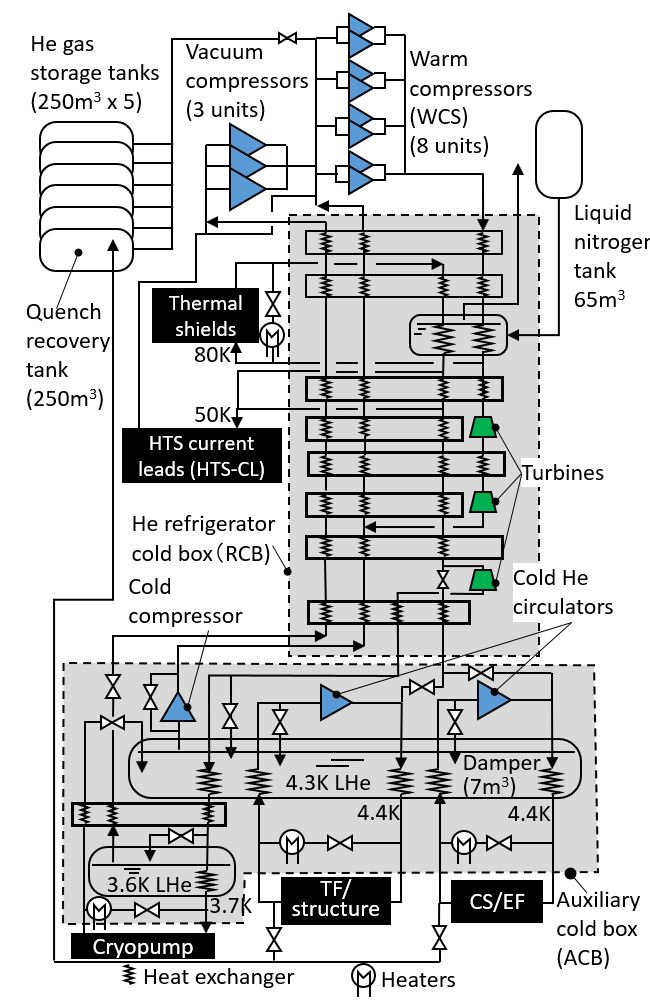 The cryogenic system mainly consists of the RCB and the auxillary cold box (ACB), warm compressors (WCS), and gaseous He storage tanks. Figure 1 shows a simplified flow diagram of the JT-60SA cryogenic system. The RCB supplies cold helium gas to the magnets, thermal shields, HTS-CLs, and the cryopumps through the ACB during cool down. During magnet and cryopump operation, liquid He (LHe) is collected in a 7-m3 thermal damper at about 4.4 K and a smaller LHe tank at 3.6 K in the ACB to precool the supercritical helium (SHe). The required flow rate to the cryogenic users is the largest among the existing fusion experimental devices. During nominal operation, the cryogenic flow rates are as follows:

Commissioning of the refrigerator and annual operations for the cryogenic system have been performed [a, b]. The main test items were as follows;

The active reaction to heat load fluctuation is essential for the cryogenic operations of the magnet system, which requires variation of current operation in the tokamak, including ITER. Such a control system was challenging so far in a large scale cryogenic system.
An advanced active mitigation method of heat load fluctuation has been demonstrated in the JT-60SA cryogenic system, using the following methods;

In the test, the heat load was stepwise increased to 7.4 kW (heat load: 100%) using heaters. In the annual operation, control parameters to adapt various heat load conditions have been investigated. Figure 2 shows typical results of mitigated heat load fluctuations for various heat load conditions. The control system regulated the return flow to the RCB within the capacity of the WCS and kept the turbine inlet temperature above 27 K slightly above the turbine´s trip temperature of 26 K. 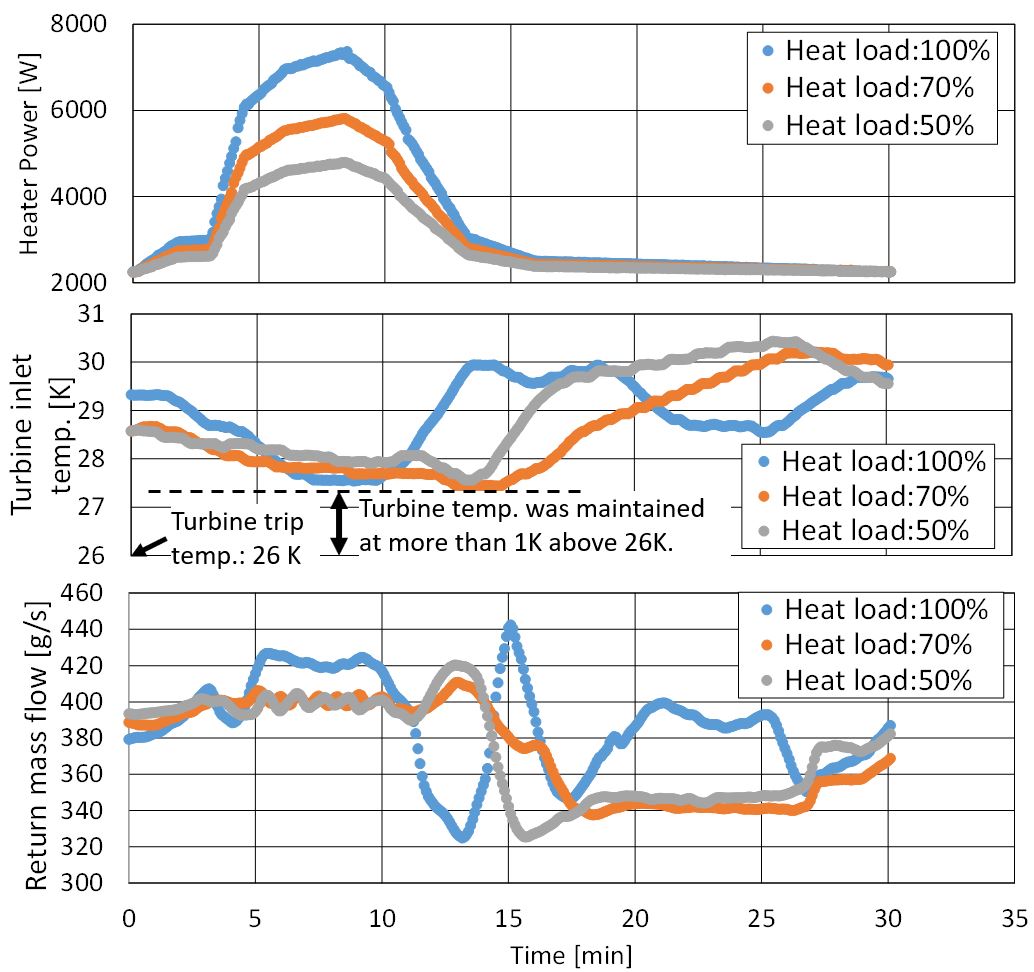 We have established the active control method to mitigate the impact of cryogenic heat load fluctuation on the JT-60SA cryogenic system. These results contribute to the preparation of the stable operation of the magnet system in JT-60SA plasma experiments during integrated commissioning of JT-60SA in 2020.
[a] K. Kamiya et al., IOP Journal of Physics: Conf. Series 897 (2017)012015
[b] C. Hoa et al., IOP Conf. Series: Materials Science and Engineering 278 (2017) 012104