The design of the ITER Enhanced Heat Flux (EHF) First Wall (FW) panels has been updated to improve repairability and manufacturabilityin their manufacturing phase. R&Ds to validate the design are conducted. The 40 plasma-facing fingers are now paired and assembled to the 316L(N) steel central beam with accessible pipe connections, which makes the welds of the pipes repairable and the fingers replaceable. The number of weldsis largely reduced for lower water leak risk and better overall deformation control, and all of them are no longer inaccessiblefor non-destructive tests. Analysis shows that the designis in good conformances with the SDC-IC criteria. Optimized welding and repairing technologies were obtained with thick pipe up to 2.5mm in a narrow welding space with stable welding shrinkage. While the assembly of fingers into pairs are well demonstrated with reliable welding quality, twice repairability and tolerable dimension control, that of the actual full-scale finger pairs assembling to the central beam is under investigated. A full-scale EHF FW protype will be manufactured for production process qualification. The hot helium leak test facility and a proposing ISO testing standard have been well established with leak rate sensitivity down to 10-11 Pa.m3/s at elevated operational temperature and pressure for its factory acceptance test. All of the technologies and examination results will be presented in this paper.

R&Ds on pipe connection welding are conducted between the fingers and fingers to the central beam using orbit welding. To accommodation the narrow space around the welds,one of the smallest welding heads was used. The R&Ds are aimed at obtaining the maximum pipe thickness at which both welding and repairing could reach full-penetration and meet criteria of ISO5817 level B. Various thickness pipes from 1.6 to 3mm were welded and examined.Results showed the most feasible one is 2mm from the engineering point of view.To confirming the performance, visual inspection, penetrant testing, radiographic testing, transverse tensile testing, transverse bend testing, metallographic examination and N-H-O content measurementwerecarried out. All satisfies the standard and the ITER requirements.Bothrepairing tests (by discard 3~6 mm across weld) and fitting tolerance tests were performed to provide guidelines for further finger assembly. Figure 1(a) shows welding shrinkage in normal welding and repairing for some test pipesin 2mm thickness. It is very stable on average for the 11 joints, showing this deformation can be well controlled in manufacturing the products. Fake 316L(N) fingers were paired by such kind of joint, showinggood geometry and position appearances as that in Figure 1 (b). The assembly of the finger pairs to the central beam is ongoing with the L-shape connection pipes in the same thickness. The actual FW fingers with Be/CuCrZr joints are under manufacturing. With such R&D results, a full-scale EHF FW prototype (FSP) will be manufactured.

An EHF FW panel consists of 32 standard fingers and 8 edge fingers. Each finger is an joint of Be tiles on the CuCrZr/316L(N) bimetallic material heat sink, in which a hypervapotron (HVT) cooling channel was utilized to enhance heat transfer of 2m/s flowing water with the solid wall. Based on previous R&Ds [1.], a 4mm-depth bottom grove is added to the HVT to make one order longer fatigue life. The bimetallic plate is made by explosion bonding [2.] with qualitycontrol by ultrasonic test to ensure no defect at the interface. Diffusion bonding Be/CuCrZr has been qualified [1.] for 12×12mm2 Be tiles in the previous semi-prototype program. To simplify the manufacturing, larger Be tiles up to 18×18mm2 is planned for the FSP. Small Mock-ups with such Be tiles were made by the same technologies, thermal fatigue test for validating its performances will be performed at 4.7 MW/m2 surface heat load for 15000 cycles. Unlike the toroidally profiled standard fingers, the edge fingers are double shaped in both toroidal and poloidal direction with irregular HVT cooling channels. This will make the Be surface having rather higher temperature at the maximum surface heat load for the edge fingers. To lessen its effects, small Be tiles as before is preferred to reduce thermal stress at the interface and in the heat sink. Further high heat flux test will be performed to evaluate its thermal performance. Elaborative design of the EHF FW panels will be done again based on the FSP experience.

The ITER FW panels are in-vessel components of vacuum class 1A. It is required that each panel shall be in good vacuum tightness with its global leak rate less than 1×10-10 Pa.m3/s in air equivalent at the 250℃operation temperature and 4 MPa water coolant pressure. To perform the test, a hot helium leak test facility was established in China, which has a 3 m3 vacuum chamber and a leak rate sensitivity around 1×10-11 Pa.m3/s. An EHF FW semi-prototype was tested in this facility, and results showed the leak rate could meet the requirement. The key is that the component shall be backed at 250~300℃ for more than 8 h for degassing. In addition, it is found the leak rate is vacuum level dependent (see Figure 2). To reach the sensitivity, the vacuum level shall be as low as 10-5 Pa. An ISO standard was proposed to conform the tests all over the world for fusion reactor components. 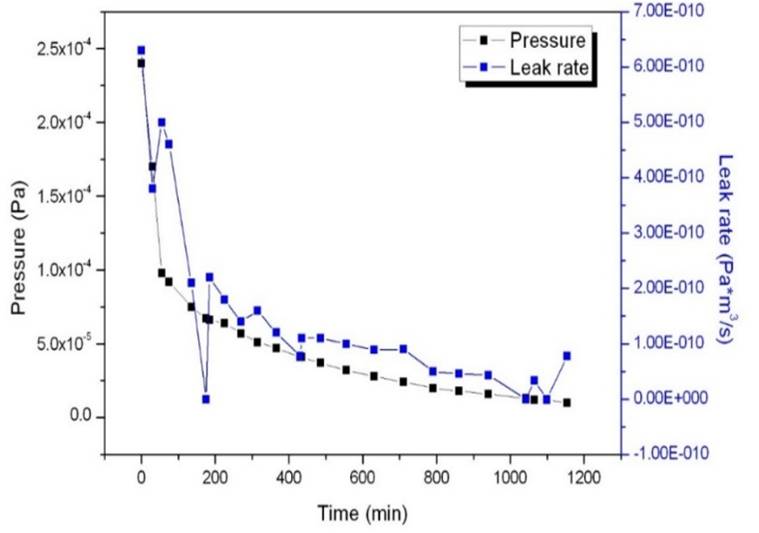